It’s been a while since last I posted, but I’ve been rather busy. At 1 August we’ll be moving to another city, as Tobias got accepted to the education we hoped and prayed for! We have found an apartment, and are looking forward to a larger kitchen (the one we have now is tiny), not having to carry the pram to the third floor, and a second bedroom, which will be used as a study, as B sleeps in our room. With luck we might even get a proper winter there, as it’s a bit farther north, and not right by the sea, as the city where we live now. We love it here, but change of scenes for a while is not a bad thing. We’ll only be there for less than a year and a half, as the latter part of the education will be given in this part of the country, when we’ll have to move again. Anyway, with all of our planning, hoping, looking for a new home and waiting for acceptance to university, as well as being surrounded by boxes in various stages of packing, I’ve not really been in the mood for writing until now. Now that I am writing, I once again find that I have a harder time expressing myself than before. I blame it on nursing brain; some days I feel truly stupid.

Two weeks ago we attended the annual medieval days at Varberg fortress again. As usual, it was fun (and as usual, not very much of interest to buy for serious reenactors), and I was in a much better mood than I was in Lund. B was on his best behaviour (but then, he’s usually an angel), we only had to stop once to nurse him on the way there, and not at all on the way home, as he slept the whole time. He charmed everyone, and made very good advertising for babies.

On Friday evening as we made camp, heavy, dark clouds came in from the sea, but we moved quickly, and managed to have all the tents up when the rain came. 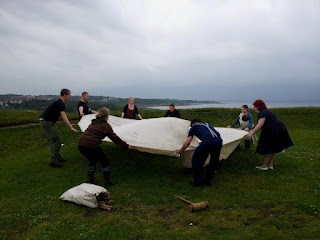 Our family didn’t sleep in the tents this time, it did take a rather heavy toll in Lund, and right now, it’s not worth it. We stayed at a hostel, situated in what used to be a jail, right outside the walls of the fortress. Luckily, our cell (No 19) had a window you could actually look out of; most cells had nothing but a tiny little thing close to the ceiling. 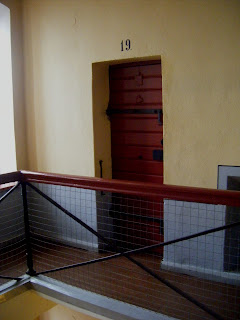 Despite the not too happy history of the place, it was the nicest hostel I’ve ever stayed in, where they had worked with the original purpose, of the place when it came to decoration, and not against it, with a good looking room, fresh bathrooms and a tolerable kitchen. 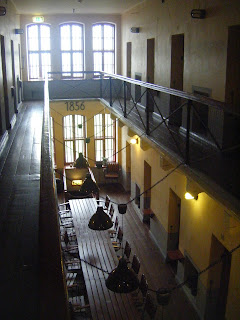 Saturday was perfect for wearing layers of wool, as it was chilly, and cloudy, even misty from time to time. It was very pleasant. Good thing I’d made warm clothes for B, he was happy and toasty the whole day. I also found that double layers of dresses come in handy as an improvised blanket when your child falls asleep. 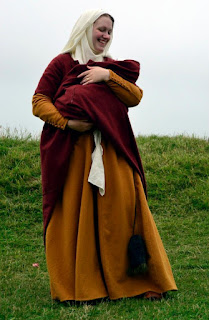 Sunday on the other hand was hot and sunny, but except for the children who were stripped down to their linen shirts and shifts, of course we all stayed in our wool clothes, though not with overdresses, hoods and the like. We and the parents of the other baby desperately tried to find some place cool and shady for our little ones.

One of my sisters was with us, and she slept in the women’s tent up at the camp. We brought her our large straw mattress, as B and I would use it during the days. She was so helpful, taking care of B a lot so I could rest my back. Now, she’s as fond of babies as I ever was, so I’m sure she didn’t feel it a burden, still, I’m grateful. 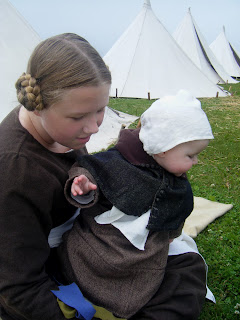 I had fun, dressing her hair in plaited coils over the ears, in a very fashionable 14th century way. I think she looked very nice, having hair long and thick enough not to make the coils look too thin.

I believe that, for me, the single best experience of the weekend (apart from hanging out with our friends), was churning butter. I’ve never done it with a proper churn before, and it was brilliant! Too bad B became hungry before I could finish it, and help in washing and salting it, but you can’t have everything. B liked the churning as well, and wanted to chew the staff. 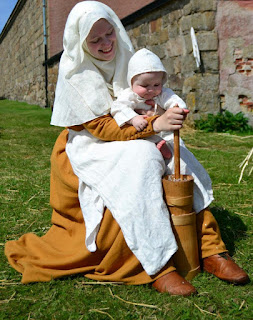 Picture by Peter
Tobias was otherwise the one upholding the family honour of putting in a lot of work in camp related chores, churning butter was almost the only work I did, besides tending B . 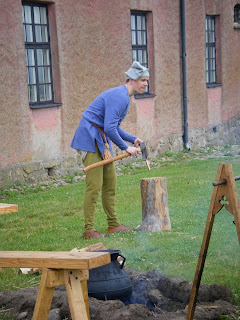 He also took part in the wrestling lecture, and looked great (not that you can see it in this picture...), but got slightly bruised. You can read more about the wrestling, and see more pictures here. 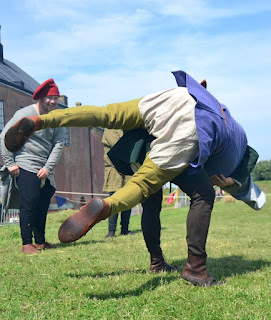 I held one of the lectures on 14th century dress, and feel I made a bit of a pig’s ear out of it. Nursing brain and a bored, slightly fussy baby (who was being entertained by Daddy, but sometimes, Mummy is the one to be with) was the main reason for it I believe, I forgot half of what I’d planned to say, and jumbled the rest. Ah well, one can’t always be on top of things.

The food was interesting at worst and really good at best. I believe my favourite was the salmon. I believe a well documented post on that will show up here. 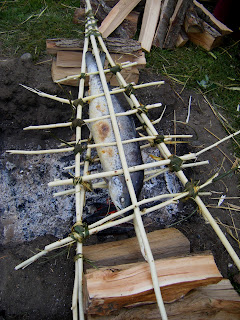 Even though I had fun, it was tiring, and I’m glad it was our last event of the season. Hopefully it’ll be easier next year. Sure, B will likely be running around all over the place, and require constant watching over, but I’ll not have to carry him all the time, and he won’t have to nap as often (which can be a bit tricky with the sounds of so many people moving around the tents all day). Sadly, this particular event will not take place next year, as the fortress will be closed for renovation. We hope it’ll be brought back when it opens again.

I have a few ideas for future posts, but what with the move and all, I’m not sure when I’ll have the time and energy for that, so don’t wonder if the blog is silent for a while.I've not stopped blogging :)
Posted by Sarah W at 22:59:00 4 comments: