Lately I've been thinking about what it means to be feminine, and today I'll share my thoughts on a feminine appearance. This is what I think and what I do to feel womanly, so if you don't agree, there's no reason to bite my head of. This is just for you to get to know me better.


There's a movement amongst some women out there to dress in a more feminine way. I like it, and want to be part of it, but it will have to be in a way that works for me, where I live. I could dress in skirts and dresses all the time (that would be nice, I had a period when I did that), but sometimes jeans are just more practical. There's also the thing of not appearing too weird - I have enough geek labels stuck on me as it is :) Besides, in the LDS church we believe in moderation in all things. For quite a long time I wondered what I could do to look feminine, despite wearing jeans, and the best example I came up with was Princess Leia in Star Wars . 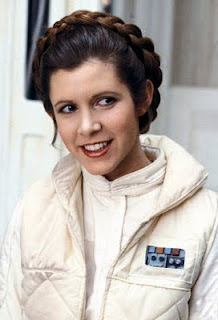 She lives in a world (or galaxy) where a lot of the time it would be impractical or dangerous for her to wear skirts, but her hair is always put up in very feminine ways. As soon as she's in a relatively safe and combat-free environment, she dons dresses or cute tunics. 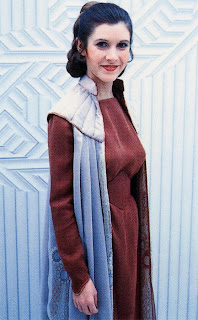 That's what I try to do. No matter what I happen to be wearing, I can always have my hair put up nicely, and that is a comfort in this women-should-be-more-like-men-and-men-should-be-more-like-women era I'm living in. (On a side note, I believe that is one of the reasons why I, and many other people like living history and reenacting - it gives men permission to be men, and women permission to be women.) Beautiful hairstyles are also something I can have at work, where I have to wear the pyjama-looking, less than pretty scrubs. Besides, wearing jeans doesn't mean you have to wear them with a t-shirt - I never do. I wear soft, feminine shirts or cardigans, often with some nice, but inexpensive, jewellery. That way I feel somewhat well dressed and lady-like even in jeans.


Another important thing about being womanly is, in my opinion, to be modest. I'm proud of being a woman, and I would never flaunt what I've been given to all the world. According to the Bible, the body is a temple, and as such, should be treated with respect. For me, that means I will keep it healthy, clean and tidy. I will not have anything tattooed on it, and I will not be used as a pincushion for multiple piercing jewellery. I won't wear sleeveless or low cut shirts or dresses, and my skirts always cover my knees. 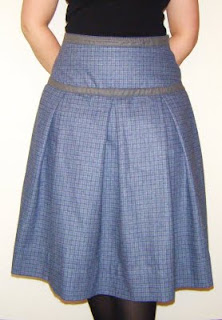 That being said, this is the skirt I'm wearing today. It's made out of checked wool, in blues and greys, trimmed with grey wool. I actually began sewing it two years ago, but then I forgot about it. I took it out last week, and finished it today. I like wearing wool in the autumn and winter.


So, that's my serious thoughts for the week :) Never you fear, hopefully it'll be a sewing related post next time.
Posted by Sarah W at 07:25:00

Email ThisBlogThis!Share to TwitterShare to FacebookShare to Pinterest
Labels: church, clothes for the 21st century, faith, reflections on life, sewing