My Dad is home again, and feeling much better. They finally figured out what’s the matter with him. It’s not really an uncommon illness, so I’m surprised it took them so long. This new doctor came in, took a look at him and said “I know what it is”, and that was it. It can be cured with antibiotics, so he should be well soon. But before antibiotics were discovered it was usually fatal. Scary. I’m so relieved it’s nothing to worry about these days. Thank you again for your thoughts and prayers.

The past week or so I’ve been working on the collar to my Swedish folk costume blouse (called opplöt in the local dialect of the time). In the part of Sweden where I'm from, the collar was made out of a long strip of fabric, gathered or cartridge pleated to the comparatively wide neckline, and meant to lie down on the shoulders, like this example from the 1830's: 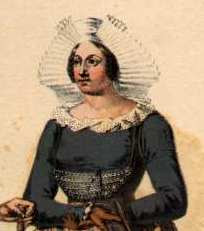 While the opplöt will be made out of linen, the collar is made of fine (30x26 threads/square cm, or 77x66 threads/square inch), white cotton. The reason for this is that cotton was a new, expensive, and very fashionable material at the time (early to mid 19th century), and most people could not afford to make the whole opplöt out of it, but they used it in the collar since that would be seen. The opplöt itself was made of the cheaper linen, since it would be hidden under a knitted woolen sweater (for want of better English word), like this: 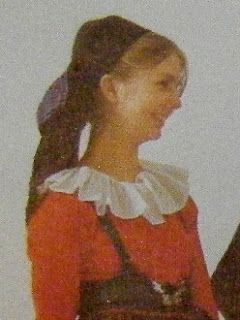 Mine is sewn with a waxed cotton thread, plainly hemmed at the short edges, and the long side sewn with hemstitching. Contemporary examples seem to have anything from plain hems, elaborate drawn thread work, edgings of simple lace, or a combination of these. I’ve seen one example made of embroidered tulle. It would seem the women of the time decorated their collars the way they had the taste, skills, time, and money for. What the opplöt was to be used for must have had its weight as well. I’m sure an opplöt used every week for church would have had a plainer collar than the one used on ones wedding day, for example. I'm not sure collars like this was even worn for every day work. The width and length of the collars seems to have differed a bit as well. Mine will be 144,5 x 11,5 cm (56 15/16 x 4 7/16”), and the hems will be the same width as in the extant examples I have information on, 6 mm (almost 2/8”) at the short edges and 17 mm (11/16”) at the long side.

I had never tried hemstitching before, so I’m making a simple one. It turned out to be so easy and fun, that when I make another opplöt, I’ll make a more elaborate drawn thread work on the collar. This is what the process looks like on the one I’m making now: 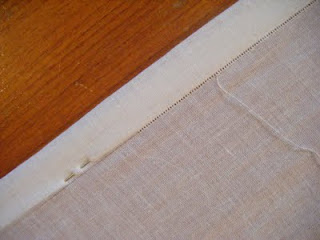 From the left: (1) the plain fabric, (2) a single thread drawn out, (3) the first side sewn, hemming the collar at the same time, and then (4) the other side sewn. I pick up three threads in every stitch, and twist the thread around them to make the tiny holes. 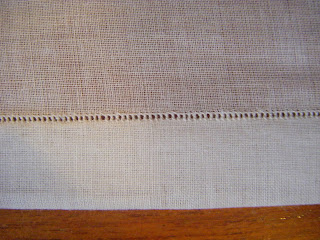 I think it looks very pretty with the contrast between the single layer of fabric, and the double layers at the hem, and the darker line made by the hemstitching.
Posted by Sarah W at 21:06:00