Most young men (and many young women as well) in the Church of Jesus Christ of Latter Day Saints serve two year missions (though the women only serve for 18 months). They get sent somewhere in the world where they are needed, and very often they have to learn a new language and culture. Tobias served in Ukraine, and learned Russian. After speaking mainly Russian for two years, you may guess that the language has become dear to him, and he’s taking Russian classes at the university, to get academic points (since knowledge is often considered invalid these days, unless you have it on paper), and also to develop it. When over there, he also got a fair few souvenirs, and so, it looks like a small Russian invasion here.

Our apartment is filled with textbooks on Russian, Russian books (religious and other; one that I guess are Russian folk tales, with pretty pictures in it). There are military badges from old Soviet as well as Ukraine, a Russian babushka doll, a carved wooden morning star with the Ukrainian coat of arms on it, two fur hats (one which he wore for our engagement pictures, and one which is absolutely, insanely HUGE), the Ukrainian flag, little gifts from people he met while there, and a lot of other things. Here’s a sample: 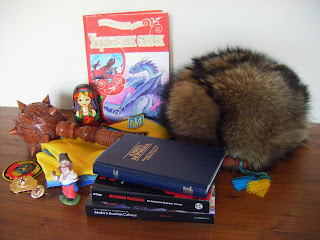 Some of the things I like, some of them I don’t mind. The rest I can live with because I know they mean a lot to Tobias. It’s only fair, considering I have occupied a lot of cupboard and drawer space for fabrics, yarn, sewing related equipment and a lot of period clothes. Besides, I’m sure I have quite a few things he’d never have displayed if it wasn’t for the fact that I like them.

The other day he gave me a small wooden bottle, with a tiny glass vial in it, containing rose oil. He’d bought it in Bulgaria (which is apparently one of the big producers of rose oil), where he’d spent a week to renew his Ukrainian visa. He said he’d bought it with his future wife in mind, though of course he didn’t know it would be me at the time. 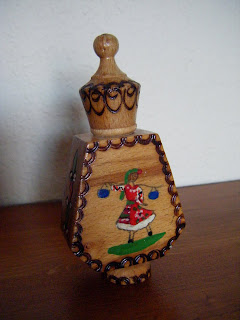 Some of my friends had organized a hen night for me last week. I didn’t know of it, until the last minute. I had dreaded a hen night (which in Sweden often include dressing the bride-to-be in extremely silly clothes and making her do even sillier things, like selling kisses to strangers), but it was kept very casual and proper. A dinner of pasta salad and “how we got engaged” stories from me, and the married women there, and then chocolate fondue with fresh fruits and innocent games. It was a very pleasant evening. Thanks to those who organized it, and those who attended!

In eight days we marry. I still have a lot to do on the dress. I cut the veil out a few days ago, but I haven’t attached it to the comb yet. And as always, schoolwork is a shadow of stress clouding everything, and right now I’m not exactly motivated. Nothing to do but get it done anyway, huh?
Posted by Sarah W at 17:17:00