The shirt I said I’d start on Monday got finished earlier today. As with most historic sewing projects this year, I fit it into one of the HSF challenges. It’s made up from three rectangles, two squares and two triangles. 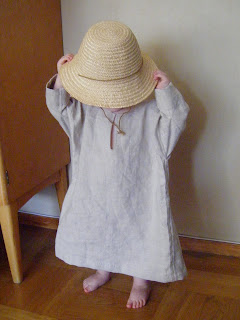 adoringly sweet in one of the pictures I took, but as I try
to keep his privacy somewhat intact, I won’t post that one. Sorry.


As you might know by now I try to save fabric (and thereby money) when I can, and so this shirt is made from a medium coarse linen runner bought in a charity shop, and, as I could only get the body and sleeves from out of that (by the way, industrially made linen items are not cut along a thread), some old scraps from an old linen dress of mine that had the same quality, for the gores and gussets. The two fabrics differ slightly in shade, but not enough to be very noticeable. The gores are both pieced. 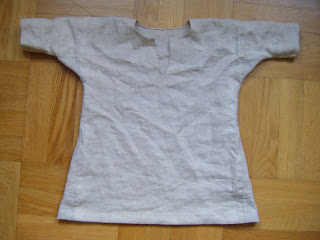 I believe that this might have been a possible practice at the time, cutting down old linens for the children. If they didn’t match perfectly, it was not as important as being able to dress the little one. One plus to making children’s linens this way is that the material is already worn soft. 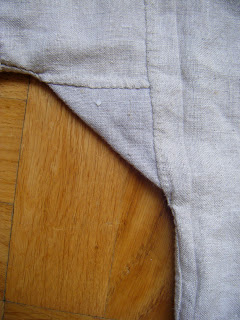 As usual, the shirt is hand sewn with waxed linen thread, and all seams are neatly felled. Usually I’d have hem stitched the hems, but I made the shirt too large, so B will be able to wear it next year as well, and running stitches will be quicker to take out then. The shirt might possibly be large enough for him to wear even the year after that. The sleeves have deep hems, and can be let down 4,5 centimetres, and the bottom hem can be let down 3 centimetres. It’s also cut really wide in the body and sleeves.


The Challenge: # 11 Squares, Rectangles and Triangles.

Pattern: None. I measured and cut.

Year: It would probably work for the whole Middle Ages, and likely both before and after too, but it’s intended for 14th century use. A wide, rounded neckline might have been more common, but the higher keyhole neckline protects better against sun and cold when worn closed and overlapping a bit.

How historically accurate is it? Pretty much; the material, construction and stitching is all period.


First worn: For the pictures.