I worked so hard to get my families new things finished for the event I mentioned in my last post, but to paraphrase Jane Austen “our intended excursion to Wadköping turned out very differently from what I’d expected. I was prepared to be wet through, fatigued…. ; but the event was still more unfortunate, for we did not go at all.” That is, little B and I didn’t go, as he got ill. Tobias went up on Friday afternoon, but came home again on Saturday evening to help me with the poor sick child. Little B’s been really ill, with huge, painful blisters in his mouth, and gums swelling so heavy his teeth almost disappeared from view, and it has prevented him eating very much at all. When he’s been so hungry he couldn’t help but eat, he did so crying from the pain. It was truly heart wrenching to witness. Naturally we went to the doctor, but as it was a virus there wasn’t much they could do. Now, after eight days of fever, he’s slowly on the mend – thankfully! He can eat again without more than the occasional whimper and is moving from liquids to soft solids, only has fever in the evenings, and can find things amusing once in a while. He’s still more sensitive than he usually is though.

Unfortunately Tobias and I are coming down with it now. I’ve had a fever for a couple of days, and I have a very sore throat. Bleh. So, pictures of the new tunic I finished for Tobias in time for the event will have to wait until we both feel better.

I have however managed to sew something during this last couple of days when B’s been getting better, and I’ve been getting worse: a medieval pilgrim’s satchel. (Isn’t satchel a nice word by the way? Just listen to it: satchel...) I have mixed feelings about them, as they are far more common in the living history world than they appear to have been at the time. Then, they seem to have onlybeen used by people during travelling, like pilgrims, but so many people of today feel the need to carry a lot of things with them, and must have something like their modern purse. I usually don't carry a lot of things with me, once I've left all my things in our tent all I have is my belt pouch. But having something more to pack in for events, and to carry the now needed child related things in, is important enough for me to have made one. It will be a good complement to baskets. 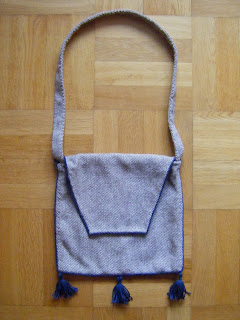 It’s made from rather heavy wool twill scraps I had in my stash, with white yarn in the warp and brown in the weft. Wool is a good choice for bags and purses, as it keeps the contents reasonably dry, unlike linen. Leather would have been even better, but I don’t have any I want to use for this. 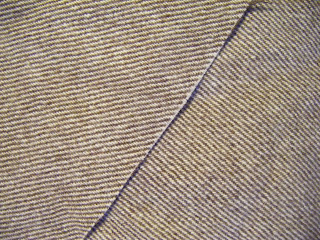 The body of the satchel is made from one piece, and the strap from another. The satchel is about 30 cm wide and 32 cm deep. I made the strap rather short, as they often appear to be so in period art. I also find it more comfortable and balanced. 
I had planned to tablet weave it together with blue wool yarn, but the fabric frayed too much for it to work. Instead it’s stitched together using waxed linen thread and trimmed it with wool braid. I also added tassels, which is a common feature in medieval bags and purses, including pilgrims’ satchels. 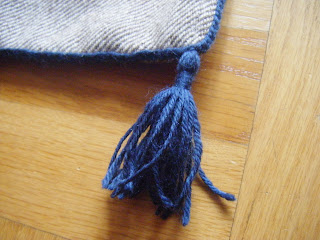 I could have lined it, making it even prettier (I'm not thrilled about how it looks on the inside of the lid) and more sturdy, but I didn’t have any fabric I wanted to use for this, and I’m working from materials in my stash as much as possible at the moment. Still, all in all I'm pleased with how it turned out. 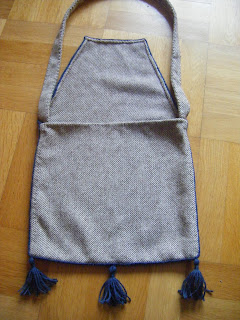 So that’s another of this summer’s planned projects I can cross of the to do list.
Posted by Sarah W at 21:00:00