For the HSF challenge # 18 “Poetry in Motion” I didn’t have a poem suitable for the project I needed to work on. So I cheated.

When I thought of the baby dress (and the petticoat that will go under it) my littlest one need for the 1840’s event in November I couldn’t help thinking of Anne Shirley Blythe in Anne’s House of Dreams: the horrid day when her wee daughter died, and the happy one when her son was born. They both always make my cry. I also thought of her reaction to her sons shortening, thinking that he grows up too quickly. I imagine that, though the story is set 50 years later than what I’m aiming at, those feelings might have been shared by many a mother in the 19th century – I feel the same when my children have outgrown a size and all the clothes are put away. One would think the sentimental Victorians would have written one teensy poem about the shortening of baby’s dresses, or mentioning baby dresses at all, but I came up with nothing…. 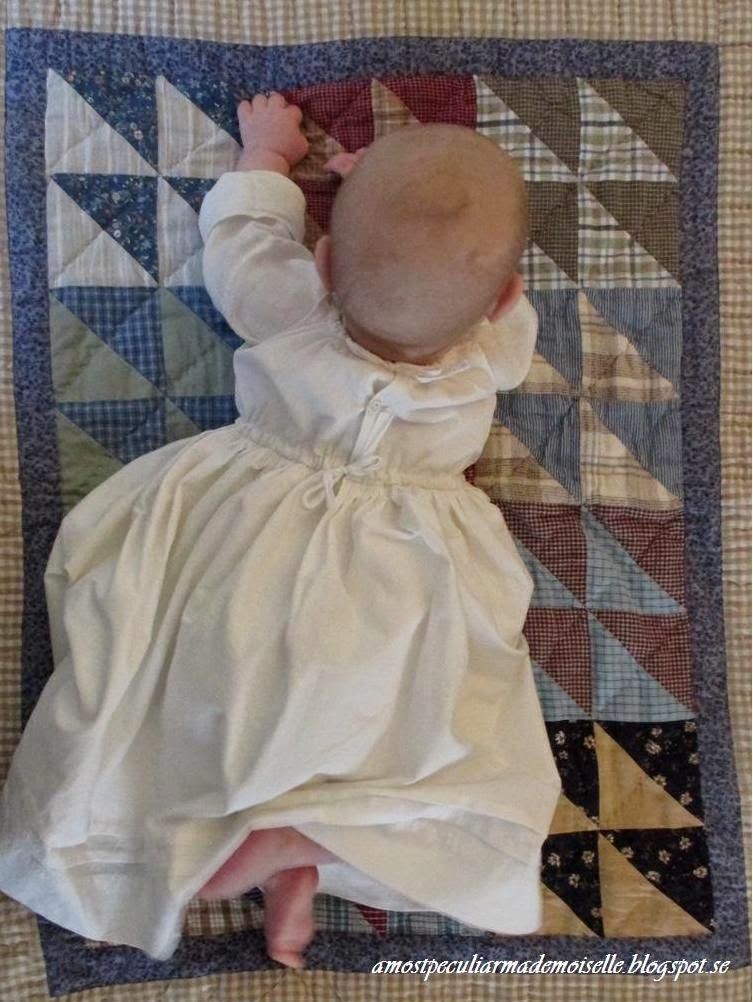 The petticoat is worn over a medieval shift – the difference isn’t that great,
and as I don’t have time to make a baby shirt just for this one event….

This is not poetry, but the writing of L. M. Montgomery is often very poetic prose – she, hardly surprising, did write proper poetry as well – this one is appropriate for the theme.

So here are the passages I was thinking about in the book:

One morning, when a windy golden sunrise was billowing over the gulf in waves of light, a certain weary stork flew over the bar of Four Winds Harbor on his way from the Land of Evening Stars. Under his wing was tucked a sleepy, starry-eyed, little creature. The stork was tired, and he looked wistfully about him. He knew he was somewhere near his destination, but he could not yet see it. The big, white light-house on the red sandstone cliff had its good points; but no stork possessed of any gumption would leave a new, velvet baby there. An old gray house, surrounded by willows, in a blossomy brook valley, looked more promising, but did not seem quite the thing either. The staring green abode further on was manifestly out of the question. Then the stork brightened up. He had caught sight of the very place—a little white house nestled against a big, whispering firwood, with a spiral of blue smoke winding up from its kitchen chimney—a house which just looked as if it were meant for babies. The stork gave a sigh of satisfaction, and softly alighted on the ridge-pole.

“…wondering whether she should hemstitch or feather-stitch little Jem's "short" dresses. He was to be shortened the next week, and Anne felt ready to cry at the thought of it.”

Anne and Leslie had another cry the next week when they shortened Little Jem. Anne felt the tragedy of it until evening when in his long nightie she found her own dear baby again.

"But it will be rompers next—and then trousers—and in no time he will be grown-up," she sighed.
"Well, you would not want him to stay a baby always, Mrs. Doctor, dear, would you?" said Susan. "Bless his innocent heart, he looks too sweet for anything in his little short dresses, with his dear feet sticking out. And think of the save in the ironing, Mrs. Doctor, dear."

When planning this petticoat I tried to find pictures of extant baby petticoats. I found two that would work well; one dated 1800-20, and the other dated 1860. They were very similar in construction, so I felt ok using the same design for the one I was making. 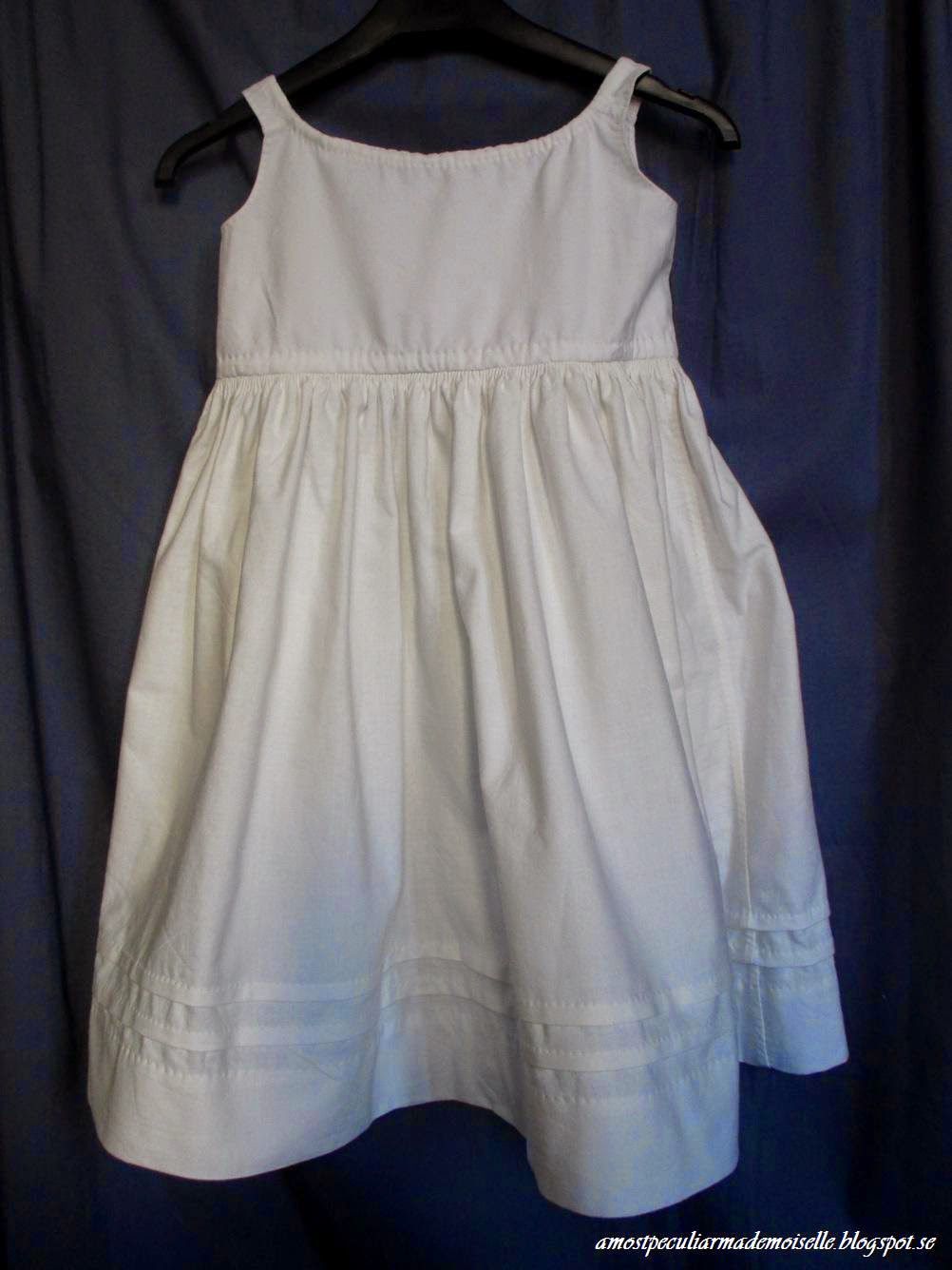 The petticoat has a simple bodice, with drawstrings at neck and waist. They tie in the back, where a thread button helps in keeping the bodice closed. The skirt is gauged to the bodice, with tiny pleats. 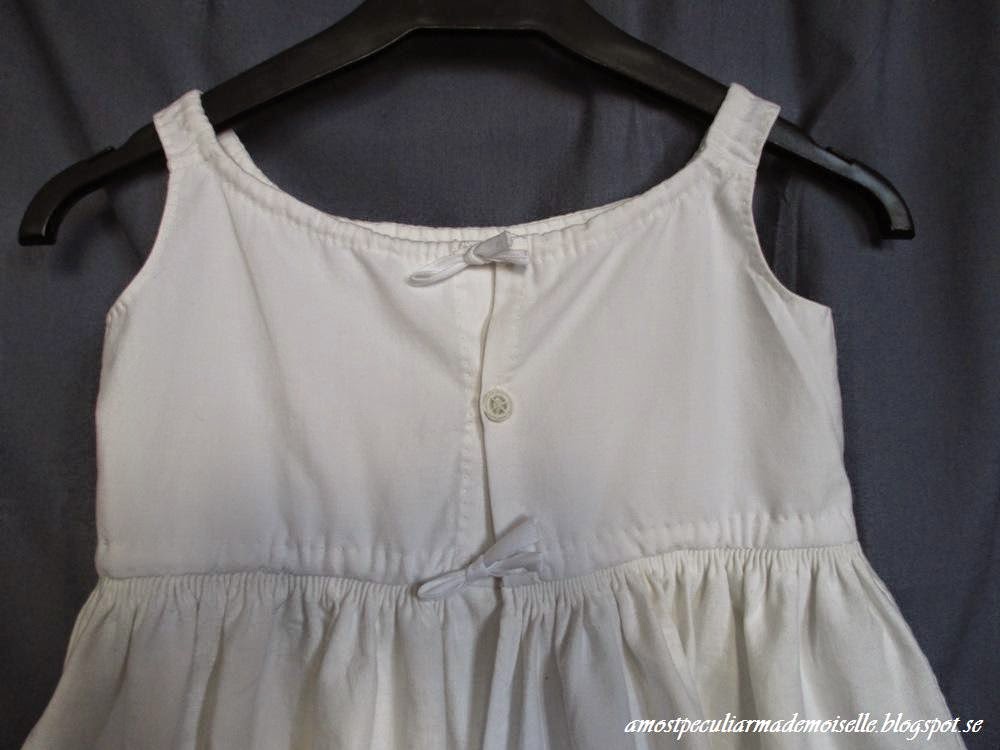 The bottom of the skirt has a deep hem and two tucks. 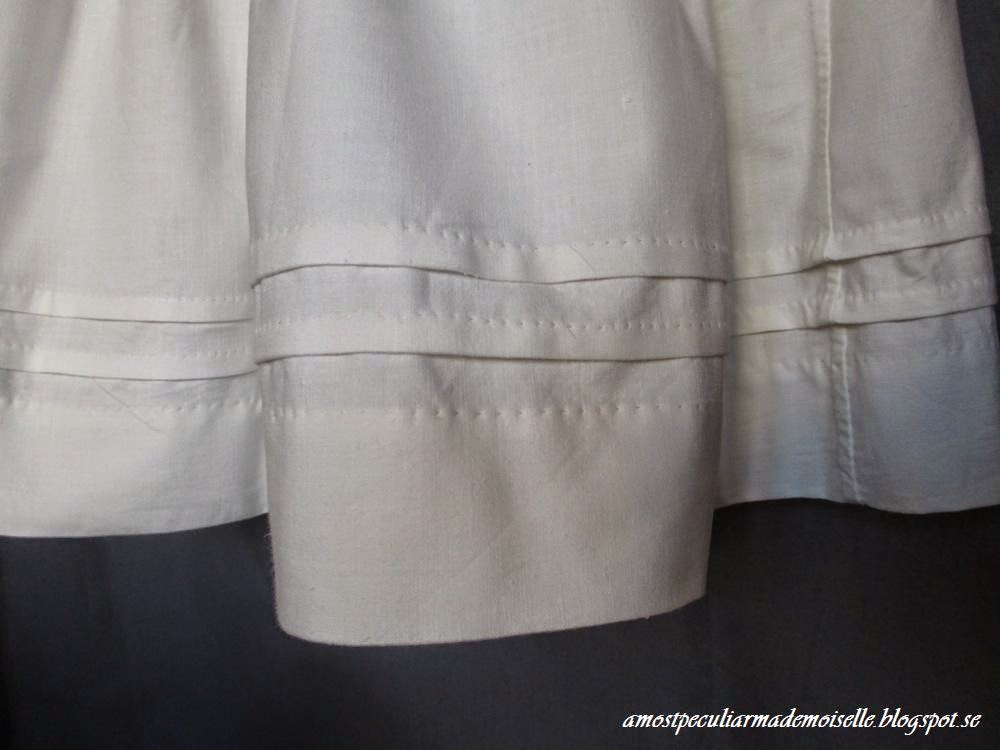 What the item is: Baby petticoat.

The Challenge: #18 Poetry in Motion

The poem: Passages from Anne’s house of dreams.

Fabric: Cut down from an old shift and petticoat of mine, originally made from sturdy old cotton sheets.

Pattern: None; I improvised from picures of period petticoats.

Year: Aiming for the 1840’s, but could pass for several more decades.

Notions: Cotton thread, cotton tape, thread button made by me.

How historically accurate is it? As good as I could make it without looking at an extant example in person. The materials are ok, as is the hand stitching.

Hours to complete: Difficult to say, as I’ve only had a few minutes here and there… 8-10?