Before last week, I’d never made an Empire/Regency dress. Imagine that. I love the period, but for some reason I felt intimidated by them, which is funny, as I’ve made lots of far more advanced and complicated things. Mind, I have made a shortgown, which is basically the same thing, only, well, shorter. But I’m rambling. 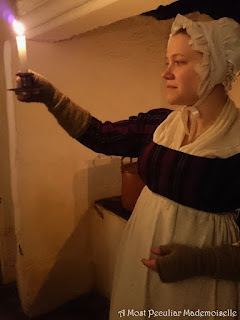 Recently I was invited to attend a small event at a local museum, and though I could have whipped up a petticoat to use with said shortgown, I really wanted a dress. I had a cotton fabric with an almost handwoven look to it that I wanted to use. That would work well, as I wanted to portray the housekeeper of the middle class house we were to be in. The stripes reminded me of the ones in ordinary Swedish women's extant dresses from the period. They were quite often made from linen/wool, but cotton is also represented.

Just two problems: the fabric only measured 150x210 cm, and I only had one week in which to make the dress. That’s one week where cutting, fitting and sewing had to be completed around all the things stay at home parents of little children do. 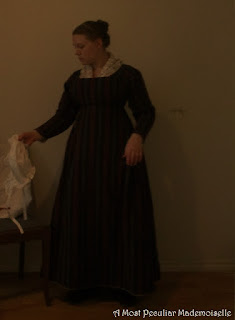 I used the pattern I drafted for the shortgown as a starting point, but changed it into a drop front. And then it was the cutting. I only had two rather short skirt lengths of fabric, and both bodice and sleeves had to come from the two pieces on either side of the shaped front skirt panel. As it is cold this time of year, I wanted long sleeves, or things would have been much easier. This is indeed a little sister of The Insanely Pieced Dress I made a few years ago:

The bodice back is made from two pieces, picture of that further down. The bodice fronts are made from 4 pieces each: 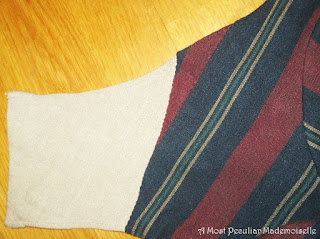 The bodice “bib” is made from three pieces: 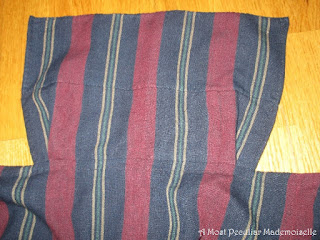 The sleeves are made from 4 and 6 pieces respectively, not counting the bias strips at the wrists: 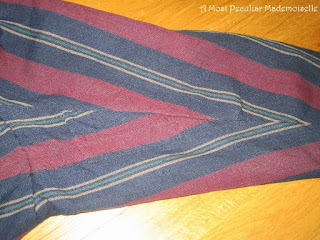 In the end these are all the scraps that were left: 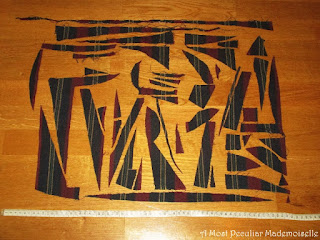 Naturally I hand sewed the dress, using waxed linen thread (unbleached where it wouldn’t show, and brown for the rest) and period stitches. I lined the bodice and sleeves of the dress with unbleached linen. I might not have lined the sleeves had not all that piecing in them needed some protection from wear.

I did my best to make the direction of the stripes follow the bodice as seen in extant dresses, and am rather happy with how it came out. 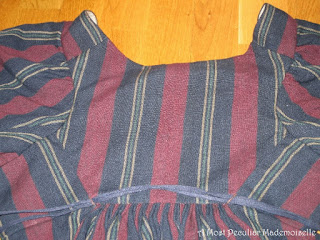 The bib is pinned in place with reproduction brass pins. I put a pleat near each end of the bib to make it shape itself around the bust nicely. I still haven’t decided if I’ll stitch them down to make darts or leave them as they are. 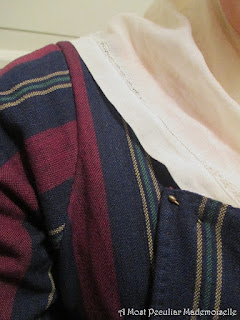 The sleeves are pleated at the back of the shoulders, and are full enough at the wrists to pull on without any closures. A tuck at the elbow (seen above in the picture of the piecing) provide a little extra room for movement. The bias strips are decorative, but their primary function is adding well needed length. The sleeves are still slightly too short, but they will do. 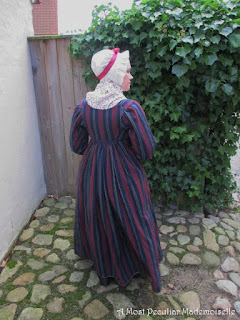 The skirt is smooth in front, and the ties on the front part of the skirt runs through stitched bars by the back seams, and then ties in front, under the skirt. 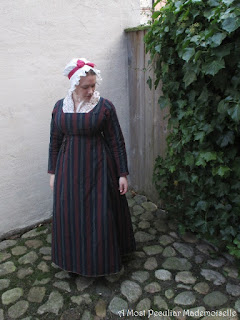 The skirt is cartridge pleated in the back. A small pad prevents the skirt falling in at the small of my back, and also supports the ties of the skirt front and any apron that might be worn. I added tapes to the inside of the bodice back to tie in the front, as I didn’t think the bodice lining did a good enough job to keep the bodice back tight to the body. The fine white cotton ties are too fine for this kind of dress – it was still a rather fancy material here in Sweden – but it’s what I had at hand. At least they won’t show. 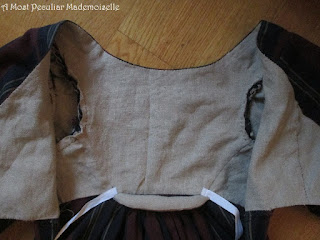 I faced the skirt hem with a cotton/linen tape I wove a couple of years ago – facings are brilliant when you don’t really have any skirt length to sacrifice on hems, and it’s a period way to finish them. The tape too is pieced – it was initially used as 18th century style ties in a hobbit skirt, and are in four pieces. 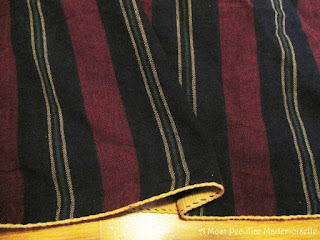 In the end I managed to get the dress wearable in time for the event, if not completely finished, hence the mitts in some of the pictures - the sleeves were not yet hemmed. Now however, it’s all done! 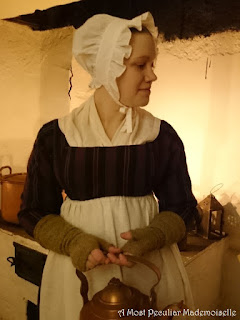 I really like how it came out, and enjoy wearing it. Now I'm really keen to make more Empire dresses. The pictures with the mitts are from the event at the museum, the ones without were taken today, when the weather finally allowed me to document the finished dress.

I haven’t had time to participate in the HSM for a while, but this dress fit the last challenge of the year.

What Challange/s are you re-doing?: # 2 Blue (the dress has a lot of blue in it), # 3 Stashbusting (everything came from my stash), # 5 Practicality (it is very much a dress to work in), #6 Out of Your Comfort Zone (first time making a dress of this period), # 10 Sewing Secrets (lots of almost invisible piecing).

How historically accurate is it? Pretty much. Materials, pattern and sewing is rather good.

Hours to complete: Difficult to say… estimated somewhere between 25-30 – the piecing took quite a bit of time to get nice.

Total cost: Nothing at this time, as everything came from my stash. The main fabric and the brown linen sewing thread were originally a gift, the linen fabric was left over from a previous project, and two of the tapes were recycled from other clothes.
Posted by Sarah W at 22:50:00