As all regular readers know by now, hubby and I are massive nerds in so many areas. One of my nerdy loves is the magical world created by J. K. Rowling. It’s so extensive, so complex and full of fun things. Our wizardingworld-themed Halloween party has become an annual thing, and I continue to add to and improve the decorations from year to year. We even have a sort of back story of who we are supposed to be, so that the decorations will make sense: just your ordinary wizarding family, so magical cookbooks, the more common potion ingredients, wands, Pepperup Potion and weird plants abound, while Polyjuice Potion, Time Turners and Marauder's Maps are absent. 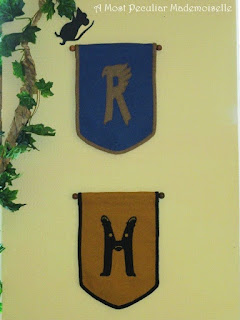 Last week I really felt like knitting a Hufflepuff scarf for myself (because according to Pottermore, my knowledge of myself, and our backstory I was in Hufflepuff), but as I didn’t have the yarn, and this is a work from stash-year, that project had to be put off indefinitely. Then the designs for the House banners in Harry Potter and the Cursed Child showed up in my Facebook feed, and I was intrigued by the Hufflepuff banner. For some unfathomable reason the colours seem to have been changed from yellow/black to yellow/brown, but that would never do, even if I’m still not quite over having to look like a bee if I want to wear house colours. I looked through my stash of wool scraps and soon found some mustard yellow and black pieces that were big enough. I copied the design off of the picture of the banner, scaled it to a size that would work with the scraps I had, and set to work. 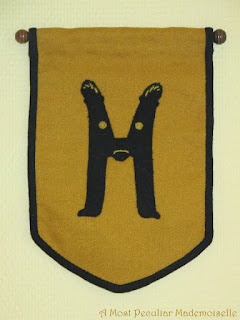 I ironed on a piece of interfacing to the black wool, drew the design on the interfacing, cut it out, pinned it down carefully, and began attaching it with small blanket stitches, with black cotton at the back of the banner for stability. When that was done I completed the design with wool embroidery. I cut out the banner, bound the edges with more of the black wool, and made a channel at the top so I could hang the banner from a rod. 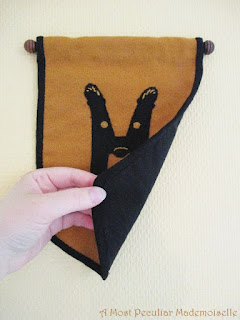 Then I set about making a banner for hubby’s old house Ravenclaw, also sorted by Pottermore, and fitting his personality brilliantly. That banner had even more issues than the Hufflepuff banner. For one, it was made in the pretty and since the films often used, but wrong colours of blue/silver, when in the books it’s described as blue/bronze. I asked hubby what he’d prefer and his response was that the books wins every time. Good man. So I looked through my stash for blue wool, and a nuance of brown that could pass for bronze. 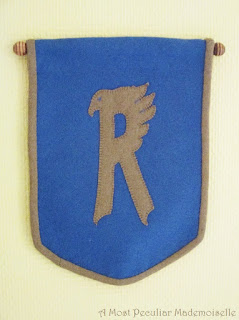 Then I had to make some adjustments to the banner design. According to the books, the Ravenclaw mascot is an eagle, but by more casual fans it’s often believed to be a raven – that the films made it so didn’t exactly help either. On the design of the Ravenlaw banner I thought it was a bit unclear – it might have been supposed to be a raven, but it didn’t look much like any raven I ever saw. Still, the eagle I tried to make didn’t end up looking much like one either - served me right for being a snob.
For the embroidery I had to pull threads from the blue fabric, as I didn’t have any yarn in the right nuance. 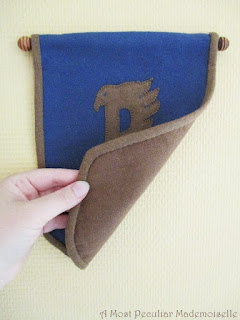 Once the banners were finished, I began making the rods they would hang from. The banners are quite small (27x19 cm), of a size you’d hang over your bed while in school, so the rods holding them didn’t have to be all that sturdy, more for looks than anything else, really, as I’ll probably pin the banners discretely to the wall, making them look like they were attached with a Sticking Charm. I had thin round rods I got at the craft store last year, and wooden beads with big enough holes to fit the rods. I just cut the rods so length, and glued the beads to the ends.