Waltz of the Snowflakes

When perusing Pinterest sometime last autumn I came across some adorable paper ballerinas with snowflake tutus. Grown up though I am, I really liked them, but thought maybe they wouldn’t work in our home; they seemed more suited to little girls, and I’m the only female in the family. After several weeks, I reconsidered, thinking “well, there’s no guarantee I’ll ever have any daughters, and even if I do, they might not like ballet”. So, I decided to make a few snowflake ballerinas anyway, and have them as decoration for the “girls’ night in” I was planning with some friends. 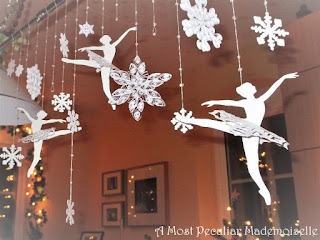 In the summer I had made snowflakes from mini Hama beads that I had left from a project I did years ago. I made every one unique, though some of them are rather similar. 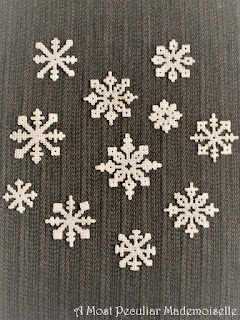 Then a few weeks ago I got caught up in making snowflakes with paper quilling; there are lots of tutorials on YouTube and on Pinterest if you’re interested to try it. All in all, I had enough suitable items to make a proper Walts of the Snowflakes decoration. 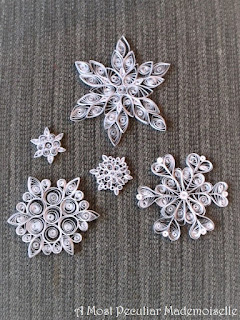 I used this template for the ballerinas, but edited out the skirt, which I then cut out of thin cardstock. I chose to make all three of them hold the same pose, to echo the feel of a corps de ballet, but made the tutus different, just as no two snowflakes are alike. The tutus were made from classical folded and cut paper snowflakes. I made the ballerinas rather smaller - 13,5 centimetres (5 5/8") from head to toe, smaller than my hand - than the inspiration pictures, as I think smaller quite often is prettier. I cut the snowflake tutus up the back, and glued them together again, using strips of paper, once they were in place on the ballerinas. The join is almost invisible. 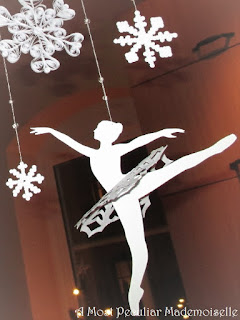 I hung the dancing snowflakes from the lamp fitting over our kitchen table, together with the quilled paper snowflakes and mini Hama bead snowflakes. On the threads that I hung the snowflakes from I also strung white glass beads, and put some threads with glass beads between them here and there to fill out any spaces. It became a very pretty, wintery decoration, the pictures really doesn't do it justice. The ballerinas make pirouettes when the heat from a candle under them makes the air move. I am quite delighted with them, and my boys also like them. It is not exactly a Christmas-y decoration, so it’s probable it will stay up well into the next year.

Have you made something similar? Please share a link!
Posted by Sarah W at 15:24:00