Well, I had several posts planned before Christmas, but for some reason, the writing just wouldn’t come together. As I’m sitting here on day six with a chest cold (but no longer a fever), I might as well show you a few glimpses of how our Christmas decorations turned out, before I take them down again in a few days or so. I have liked them more than usual this year, and am not really at all keen to take them down, even though I put them up earlier than I generally do.

First, our Christmas tree. Actually, it'll be mostly about the tree, as the pictures of the other stuff didn't turn out as well as I'd hoped. It’s a fake tree that we got from IKEA a while back, and though I like the smell of a proper tree, at least this one looks very real, and having it has saved us a lot of money over the years. It’s a small tree, just over 5 feet (152 centimetres), and has a functional but dull plastic stand. This year I wanted a new look, so I put the tree in a copper tub I inherited from my grandparents, and it made a huge difference. Not only did it bring the tree up a bit – I put a couple of broken concrete slabs in the tub (the tub protected by a towel) partly for balance, and put the tree on top of them – but it also looked much prettier, and more real. I’m ridiculously happy with how it came out. Some might think it’s a bit on the sparse side, but this is how many real spruces look here, and makes it feel more realistic. All in all, it's a very Scandinavian tree. 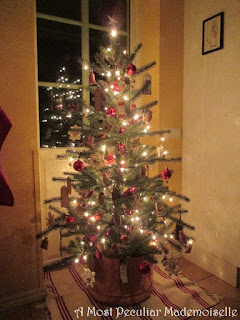 I've made most of the ornaments myself, some a long time ago, but most I've made this - sorry, it's New Years Day now, last year - makes me wonder what we had in the tree before.... The year before last I tied lots of bows from strips of fabric I had in my stash. I didn't hem them or anything, and just lay them on the branches. Simple as can be, but adds a lot of character. 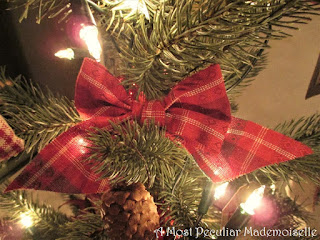 These button spruces are new. I was a bit unsure of them at first, but it turns out I like how they look on the tree. 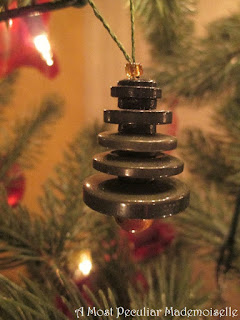 The little jingle bell ornaments are really cute, and not at all too small for our petite tree. 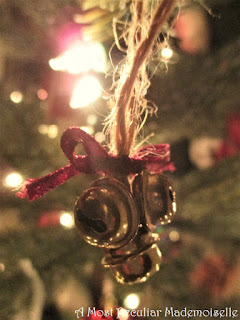 These little sacks were originally a bunting I got from my mum, but never quite knew how to decorate with. A year or two ago I cut the string of the bunting into pieces, and the now individual sacks make charming ornaments. 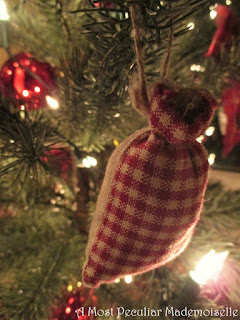 I had attached braided linen cord loops to some spruce cones for ornaments. Pine cones are prettier and sturdier to work with, but the spruce cones were easier to find as a big spruce grows by the playground, and anyway, these looked more natural on our imitation spruce tree. 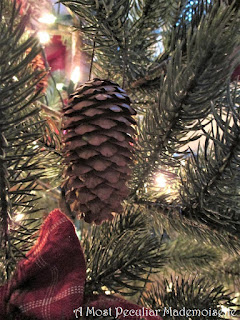 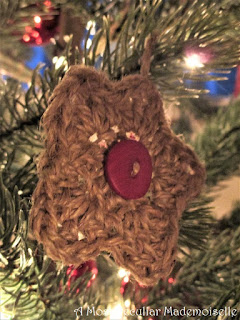 As the tree is such a central part of the Christmas decorations, the one all eyes are drawn to, I make some of the ornaments remind us about Christ. Not that good food and presents aren’t nice (I love food and presents!), but they are not the most important part of the celebration for us. Almost ten years ago, I made tags (all the rage in the scrapbooking world back then) with snippets of English and Swedish Christmas songs or scriptures about Christ written on them. Every tag had a unique décor on it, and some I'll confess I’m no longer too happy with. I might retire them eventually, or use them differently, but for now, they have a place on our Christmas tree. 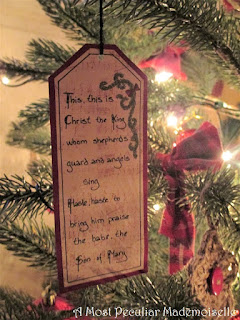 These stars I also made this year, and I had a tutorial and free printable of the ten silhouettes depicting the Nativity story planned, but life happened. I might do a post about them later. These are probably my favourite ornaments on the tree this year. I have some vintage keys, and as they are so pretty they make good ornaments, but they also remind me to let Christ into my life. 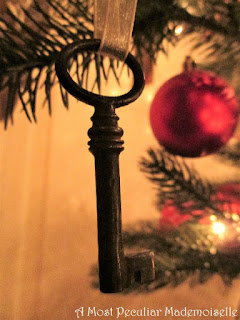 The boys had received a countdown candle, that helped them visualize how many days were left until Christmas. 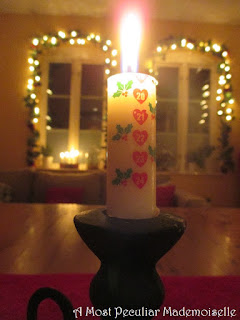 In mine and Tobias' bedroom I put a 14th century reproduction drinking pitcher, tied a ribbon round it and filled it with holly sprigs I'd picked. In a matching bowl I stored spare tea lights and matches. 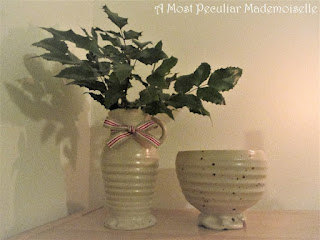 Above the window I used more of the vines from our wedding (same as I used round the windows in the kitchen), trimmed with red bows, made from strips cut from a piece of fabric in my stash. 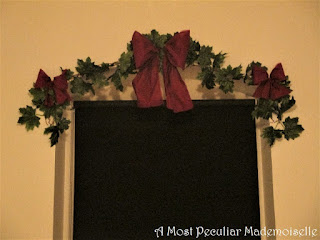 Home made sweets is tradition. This year we kept it simple and only made chocolate fudge and chocolate balls. The boys helped with the latter, much to their amusement. 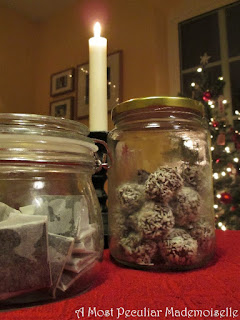 Mum always used to make nicely decorated bread for Christmas, and that is a tradition I like to continue. I love holly, so a holly sprig seemed fitting. (On a side note - as I do like holly so much, I was very pleased when the Pottermore sorting announced that my wand was made from holly and unicorn tail hair.) Here is one of them, pre proofing. Mmmm, bread.... 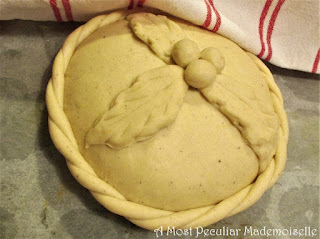 We had a very quiet, comfortable  Christmas - the kind I like best. How was your holidays?

A bit silly to have a look at the Christmas decorations in January, but there you are :) I wish you all a Happy New Year, filled with love, peace and creativity.