A Sad Excuse for Shoes

In three weeks I’ll be going to an event with a late 14th century group I’m hoping to join. I have ordered a pair of shoes from England, but they won’t be arriving in time. My old ones are impossible to wear, being more holes than anything else – a picture of them can be seen in this post. So, there’s nothing to be done but to make a new pair. And I really, really dislike making shoes.

Furthermore, I have a few problems. I have a good material for the soles, but not the uppers. There’s no way I’m wasting good leather on shoes that are just made as a last resort, and would have had really bad uppers. So what I’ll do is making a pair of rather ugly, thin shoes with the other material I have at hand. They won’t be pretty (in fact, the first one is so ugly right now, still wet as it is, that I won’t even post a picture of it just yet), but they’ll be better than nothing at all. It’s a good thing they will mostly be hidden by my skirts.

I made most of the first one yesterday, and even if the material is thin, and I made holes for the sewing beforehand, and using pliers to pull the needles, my hands are so sore today that I could hardly open the right one this morning, and my nails had dug deep into the palm, which really hurt. A piece of the skin on my right little finger is torn of from pulling the thread. The shoe is turned and drying, but I won’t start the other one for a few days yet.

Since the shoes are so thin and could use some protection in case of gravel, asphalt, rain or mud, yesterday I took up an old project again. Some years ago I started making a pair of very basic pattens, but not being very good with wood work, it ended with the ER and three stitches. Yesterday I felt brave (or desperate) enough to start working on them again. It went better this time; at least there has been no shedding of blood so far. 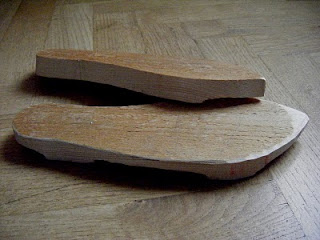 If I had started them now I would have had the front “heel” further back (making the movement of the foot more natural), but I think I’ll be able to walk in a somewhat normal fashion anyway. At least it worked tolerably well when I tied it on yesterday. 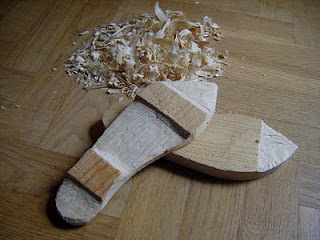 The only tools I have for this has been a saw, to get the shape of the soles, and a knife for carving out the heels. Pathetic. Let me tell you, it is hard work for someone with no talent in this area, and probably quite dangerous as well. I’ll try to be careful, and hopefully I'll get them done in time. Right now I feel scared of working with the knife again, imagining every kind of accident that could happen, so we'll see what I'll do...
Posted by Sarah W at 17:29:00