Continuing the theme of footwear from my last post, today I'll show my two pairs of women's short hose and my pair of pattens. 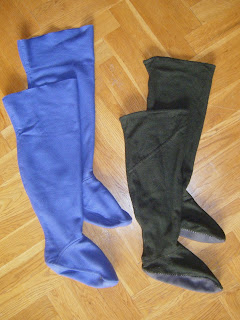 The green hose were made years and years ago, from thin tabby wool, but being stitched with the wrong kind of thread, has been re-sewn and all seams felled with unbleached, waxed linen thread, my usual choice for 14th century sewing. 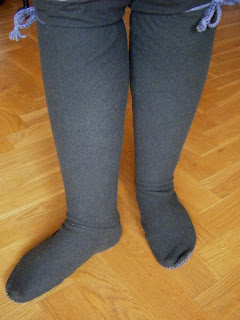 The soles wore out last summer, so I sewed on new ones in thicker greyish wool on top of the old - I think the look of the contrasting soles is rather nice. 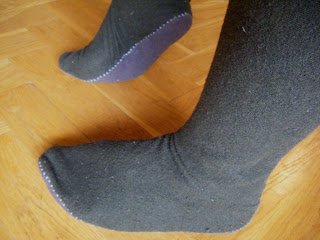 As I wrote about last year, I made a new pair of short hose, from melton wool left over from making Tobias' tunic. I did manage to sew them together on the morning of the event, but not to stitch down the seam allowances. I've now done so, but as the fabric doesn't fray, I've left the top of the hose raw. As I had a big belly in the way at the time, I didn't manage to make these fit as well as the green pair, but never mind. Should I ever attend a cold event I would probably be able to wear these over the green ones... 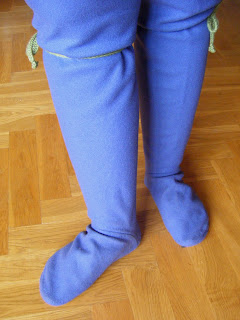 Both pairs of hose are cut on the bias and are held up by garters under the knees. As the garters are not to be seen, they are simple things made from wool finger loop braid. The fact that the braid is a bit stretchy make it very good for garters as one would not wish to have the circulation cut of. 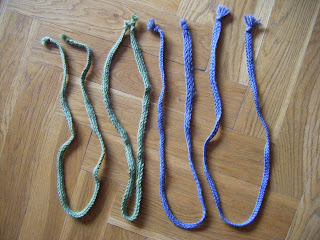 I also finished my pattens quite a while ago, probably close to two years. They are likely nothing a patten maker who had any sort of professional pride would have sold, but rather what a clumsy amateur or apprentice might have made. Wood work is not my best talent. I don't think the wood (pine?) is the best choice for pattens, but like so many times before, I've had to make do with what have been at hand. 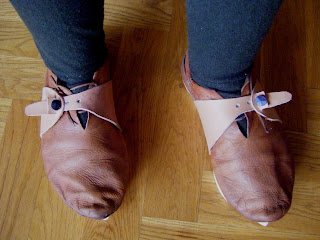 I've never tried their usefulness, as the events I've attended since finishing them has been sunny and dry for the most part, except for one, and then I forgot to bring them. Ah well. I think they might be a tad too low to offer good protection though. 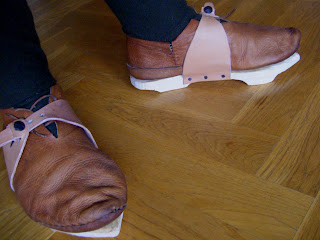 And even if it rains I'm not sure I'll dare to use them as long as I have a baby to carry, it's likely to be very slippery with these on. On the other hand, so are leather soles... Hm. If I ever make new pattens I'll make them higher and with the "heels" closer together for ease of walking, but for now, these will do.
Posted by Sarah W at 20:40:00