In my last post I wrote about some pillow cases I’d finished as part of my “forbidden to start any new projects until we’ve moved” deal with Tobias. Another thing that was awaiting completion was a dress begun this past spring. I wanted a pretty dress, fit for church, which it would be possible for me to nurse in, without it being too obvious it was a nursing dress. If I could still wear it after B is weaned that would be nice. I had seen a very pretty dress worn by Sophia Myles in an episode of Foyle’s War some years ago, and was reminded by it when I bought the first three series. I decided to try and make something similar. 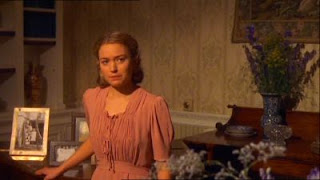 I had stumbled on very good priced semi sheer cotton during the winter, and decided it would do for this project. I draped the bodice, sewed it, and left it. Now I took it out again, drafted the skirt and sleeves, and rather quickly finished it. I also made a rose from the dress fabric and a piece of velvet ribbon to wear in my hair. 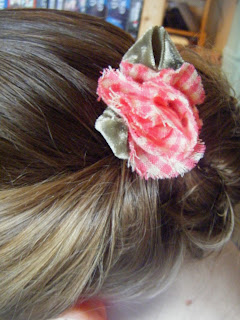 The dress is closed by a zipper in the left side, but the gathered bodice front opens, as you see, with self fabric ties. This makes it quite easy to gain access for nursing, and also makes it a bit adjustable in size for when I’m no longer nursing. 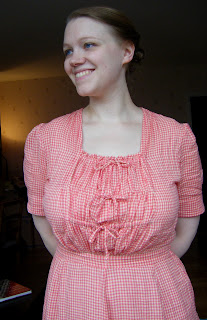 The dress has wider ties that make a bow at the waist back, to give some visual interest. The skirt is slightly flared, and ends mid calf. 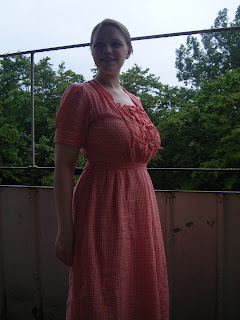 The sleeves are gathered at the shoulder, and have six small, stitched down tucks taking in the width at the cuff. 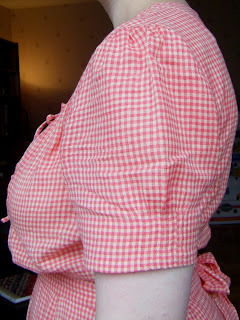 This dress turned out entirely hand stitched, first since I did a lot of sewing when B was sleeping in my lap as a teensy weensy baby, and then, when I took it out again, my sewing machine was not easily accessible in the mess and confusion of boxes.

Unfortunately I’ve had to use the self timer on the camera, and after wearing the dress for hours, so the pictures aren’t all too good. Also, I’m afraid the nursing bras I have don’t give enough support to make a pretty silhouette. Ah well, I’ll have to live with that until I make one myself, or stop nursing.
Posted by Sarah W at 16:41:00