I once said that you can never have too many towels, and so, I’ve made another one. A nice little project when there’s been no time or energy to work on something more complicated.

There are quite a few pictures and extant examples of linen towels with indigo blue borders woven in, from the 14th century forwards. As you see from the examples below, they were beautiful things, often with intricate patterns. 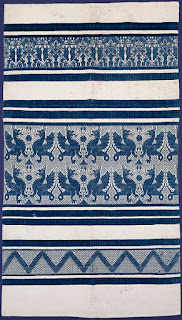 From the very little reading I’ve done on them, they originated in Egypt, and then Italian weavers (primarily in Perugia) took it up, changing the patterns to fit European and Christian taste better. You can buy reproductions, but we don’t have the funds for that, and we certainly don’t portray a family who’d be able to afford an imported luxury item like that back then either.

They seem to often have been used as napkins, worn by servants when waiting at table, and attending at births. To find links to more pictures, go here.


The Birth of the Virgin, Giovanni da Milano, 1365.
(Isn't the lady on the left wearing the most beautiful dress?)

The Gent Altarpiece; Niche with Wash Basin, Jan van Eyck, 1432.
This one looks almost as simple as mine.

This one is the budget option. I imagine that, perhaps, someone who’d seen the fancy ones might have woven a simpler kind on the blue striped theme. I made it from an old linen kitchen towel with a herringbone weave. A diamond twill seam to have been the most common weave used in towels, but herringbone did also exist. Mine is clearly much shorter than the ones in the paintings, and to be honest, I don't know if this kind of towels ever came this far north. Trade was extensive though, so it's not impossible. Edit: I've read today (27 August 2013) that the inventory of Håkan, a Swedish priest just taking over a parsonage in 1310, mentions two fine, blue striped towels - I have documentation :) End of edit. 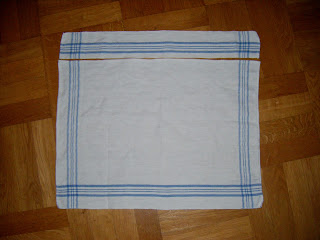 I cut away the blue stripes going lengthways, and hemmed the towel – I also hemmed the short sides anew, as they were stitched on machine before. 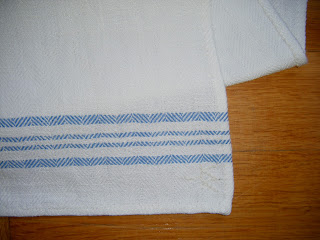 We now have a fancy towel for nicer occasions. 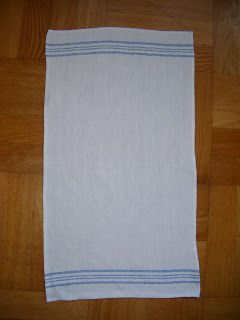 The strips I cut away will be saved to someday end up in a quilt. 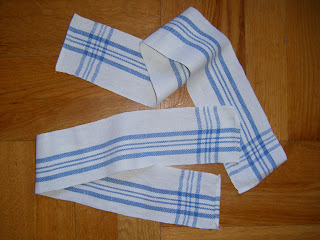