The Return of the Livkjol

Autumn is upon us, and warmer clothing is required. As some of you long time readers might know, I love folk costumes in general, and the ones from my place of birth in particular. Now, I like when you can take an element from period clothing and bring it into ones 21st century wardrobe. I decided to try and see if a livkjol can work today. The livkjol is the main piece of clothing for many country women in Sweden up till the mid 19th century, even longer in some places. It varied a lot in appearance depending on where you lived, always consisting of a bodice with an attached skirt (liv = bodice, kjol = skirt). In the spirit of true local patriotism, I chose to base mine of off the ones close to home. Well, where I lived as a child anyway.

In that part of the country, the west of Skåne (Scania), the bodice and skirt of the livkjol were made from different fabrics, the skirt usually wool, the quality depending on wealth and occasion. The bodices were wool for everyday, and might be for nicer clothes as well, but those who could afford it had bodices in silk, preferably brocade. The bodices on fancier livkjolar were often trimmed with strips of silk in a solid colour. The bodices were closed in front by hooks and eyes, or a chain and buckles in silver or a lesser metal, or simply left open. The skirt was also opened in front, but as most of it was covered by an apron, it didn’t show. All these variations were often dependant on where you lived - a few miles might often make changes in cut and style. You can see a variety of livkjolar from Skåne here.

Now, I wanted a dress that would not be a costume, or a period correct piece of clothing, but a garment that could work today, inspired by a period (and very local) style. Not modern by any means, but not too odd. Silk were out of the question (I have a baby after all), as were too bright colours. I also had to use what was already in my stash. I ended up making a dark brown bodice, trimmed with black strips, and a dark green skirt, all in wool blends. 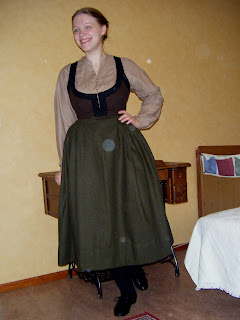 The bodice is cut in one, and gets some extra shaping from two darts in the front. Darts began coming into use in livkjolar in the mid 19th century, inspired by the current fashion. This picture shows two young girls from the 1870’s in darted livkjolar over knitted sweaters, spedetröjor. Adorable aren’t they? It closes with hooks and eyes. It's is lined with a simple cotton fabric, but back in the day, linen would have been far more common.

The shape of the trim (especially in the back) is typical of some areas in Skåne, and can be seen on the country woman on the left in this picture, Marknad i Lund (Market in Lund) from 1858. It’s made of strips cut on the straight grain, shaped around the curved edges with little stitched down tucks. 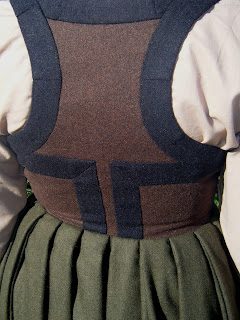 The skirt is flat in front (as is often the case in originals), and then pleated with double knife pleats, though I think single ones were more common. I didn’t want a front opening as I won’t wear an apron to cover it, so I made some sort of version of a dogleg closure. While the bodice opens at centre front, the skirt opens under the first pleat to the left, almost invisible. It has a facing in mud coloured cotton at the hem. The skirt is a bit shorter than originals, but I think it works for modern wear. 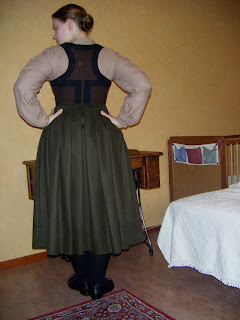 The greatest deviation I’ll be making is in what I’ll be wearing with the livkjol. It would have been worn over white linen shifts and dark knitted spedetröjor, but I’ll wear it with a bit more modern (mostly store bought) blouses, shirts and sweaters. I did end up having to make the blouse I’m wearing in the pictures, when I remembered that all my pre-pregnancy ones are too small, and will be as long as I nurse. I really tried to sew it using modern techniques, but I have forgotten many of them, and automatically start using period ones…. 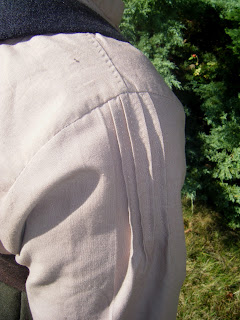