So I’ve been working as much as I’ve been able on my sisters Disney outfit, and now perhaps you may guess who she’s going to be? I had a couple of good, but not correct guesses (Belle and Ariel), after introducing this project. A clue: it's not one of the Disney Princesses. 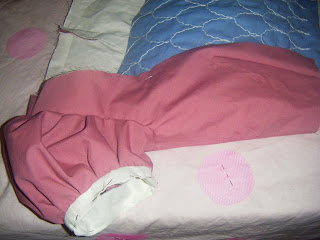 I haven’t made as much progress as I’d have wished though, as little B has been a bit fussy and demanding lately. Maybe he’s teething again… I’ve been worrying about how in the world I could get the dress to fit well without trying it even once on my sister, but now things are working out for the best. Me, Tobias and B are going away for a week, first visiting my family for a few days, and then his. A huge bonus to the pleasure of spending time with our families is that I will be able to have my sister try on the dress, and I can make some last minute changes if necessary. B will also have happy grandparents, two aunts and an uncle who’ll be more than happy to keep him occupied so I can sew.

The sister missionaries dropped by earlier for a few minutes, and were met by this sight: a mess of toys and other things, and a hooped skirt and a petticoat hanging from the ceiling. They asked if I had a new project, and were exited when I told them what it was. Girls, and many women of all ages often are when it comes to Disney outfits, me being one of them.
I have ended up doing some of the sewing by hand when B was asleep, and as so often happens when I do that, I ended up using historic sewing techniques. It's just the most practical and time saving way of doing hand sewing. Do any of you also do that, even when doing non historic sewing?
Posted by Sarah W at 19:43:00