The holidays are over, the tree and ornaments put away. Life is back to normal, except that the classes at university haven’t begun yet, so Tobias is still home during the days, which is nice. We spent a lovely week, first visiting my family for a few days (where I finished the Disney costume), and then his (where we went on a date and saw The Hobbit).

EdythMiller was the one who finally guessed what costume I was making; Bo Peep from Toy Story. Here are some pictures of it, of course worn by my sister E. 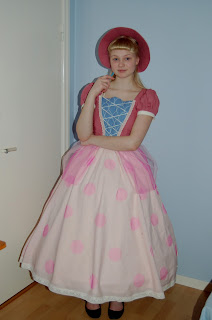 Just trying on the costume and experimenting with the hair.


She had a very limited budget, so I had to get creative. The pink bodice and the bonnet were made from an old tablecloth bought in a charity shop. The blue stomacher was taken from an old discarded skirt of mine. I had all lace and cord for lacing already, and the pantalettes were made from a sheet our Mum sacrificed. The materials for the skirt and overskirt I bought new, but the skirt is to be remade into a modern day one for her later, so not much money lost. 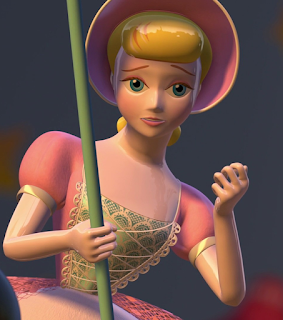 The bodice is made in two layers, treated as one. The side and shoulder seams were sewn from the outside, so though it looks like I’ve put a row of decorative stitching there, it’s actually the real seam. Looks pretty, and is sturdier than modern stitching would have been. I would have liked to have done the back seam the same way, but since I didn’t know if the bodice would fit as it was or not, I didn’t. Turned out it fitted perfectly, but by the time I found that out, there wasn’t time to re-do it. Ah well. The bodice has darts front and back, piping all round the front and neck, puffed sleeves (that I improvised directly on the fabric – I’m very pleased with them), and two layers of tulle at the waist, as the over skirt. 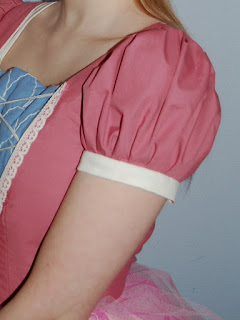 Often when I use hooks and eyes, I end up using only the hooks, using sewn bars to hook them to, so I had quite a few left over eyes. (That’s a sentence you don’t write very often.) I stitched them to the inside of the bodice front, to pull the laces through. The front edge of the bodice is boned with zip ties up to where the lacing starts, and a pretty lace covers it. 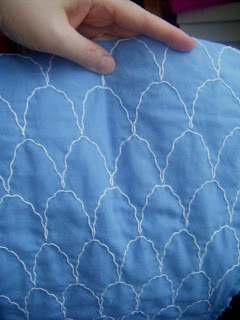 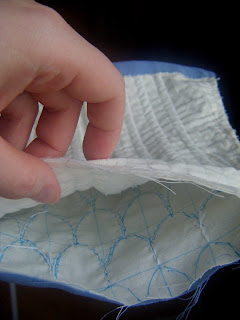 I traced the pattern to be embroidered on the back of the fabric.
The embroidery itself is just running stitches which I've threaded the floss through - quick and simple.

I stitched the stomacher to the front of the skirt waistband, and added pieces of ribbon close to the top of the inside, to be tied to the bra straps to be kept in place. This arrangement made the bodice very flexible as to size, and made it possible for it to fit so well from the beginning. It was also quick to do, which was essential.

The skirt is a semi circle (I’d had preferred a full circle, but as money was an issue…), with large dots of tulle tacked on. They are easily removable when the skirt is to be made over to modern use. It’s pleated to a waistband that buttons at the side, and is trimmed with lace at the hem. I made a half circle petticoat which I attached to the same waistband. These are worn over a hooped petticoat that I made ages ago. It was a bit too long, so I put two tucks in it. Not perfect, but works well enough. The skirt is attached to the bodice in the back, from side seam to side seam. Unfortunately I don't have a construction picture of this...

I made a pattern for the bonnet brim out of paper, and tweaked it until I was satisfied with the shape. The brim is stiffened by rigeline along the front, and by cardboard pieces stitched in place. The crown is a pleated circle, with tulle giving it a bit of hold. A comb is sewn to the inside seam between brim and crown, to attach to the hair, as no visible ties are seen in the movie. 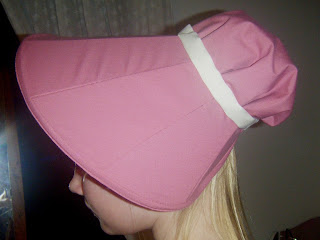 First time trying on the bonnet - this is not how she wore her hair to the dance.

The flounced pantalettes were made by our Mum, as I was running out of time. They turned out just as they should – thanks Mum! 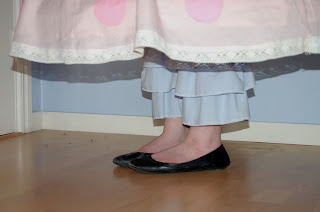 I wanted E to have a staff as well, but besides not having the time, or much of an idea how to make one, a full size staff would be rather impractical on a dance. I asked our Dad if he had any ideas as to what we could use for a little one. He went down into the cellar, and when he came up again he’d made this out of an old coat hanger – thanks Dad! E painted it, and it’s adorable. The tiny staff also ads a bit of humour to an otherwise sugary sweet outfit. 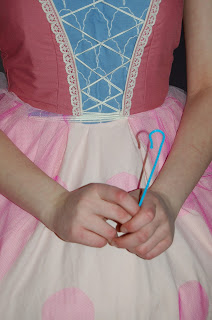 I’m afraid this is the only picture I’ve managed to get hold of from the dance. E made her hair and makeup herself – isn’t the fringe and curls just perfect? I think she looks adorable, just like a doll. 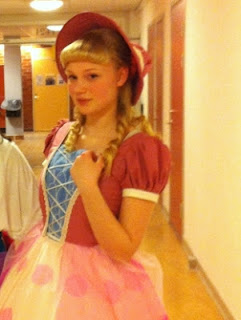 She won the prize for best costume, which thrilled both her and me. It's the first time one of my costumes have won anything. Apparently you need personality, not just a good costume – I’ve had several really nice costumes, but never won a thing (until I improvised a ghost costume the day before a Halloween party, and sat there looking as gaunt, tired and absent minded as I really was – probably the reason for me winning that time….); but then I’m rather quiet and retiring, whereas my sister is more sprightly and outgoing. A couple of people had asked her “if Sarah made your dress”, and I’m very curious as to who it was. People I know, obviously, but who??

And so this fun project is at an end. It was a very agreeable one, but I’m glad I don’t have another project with such a strict deadline after it.