For the second challenge of the Historical Sew Fortnightly (UFO: unfinished object) I went for something quick and simple. I have a modern day UFO (a dress in a late 30’s/early 40’s style) that also needs to be finished, and thought I might get that one done as well, if the HSF one went fast. I chose to finish a project that was not even mine, but my husbands; a 14th century man's shirt. 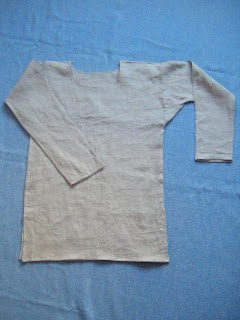 He’d started it last year, but a lot of other things got in the way, and he didn’t really mind if I finished it for him. Since late 14th century is the period we usually do, this project was more urgent to get done than my own historical UFO’s. The shirt was all stitched together, and some felling of seams where begun. All I needed to do was finish the felling, and hem the sleeves and bottom of the shirt (I’d already done the neck), and that was done early this morning, well ahead of schedule. 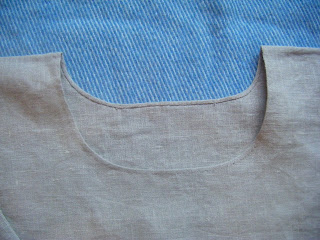 The Challenge: #2 UFO
Fabric: Unbleached linen (from IKEA of all places: a necessary allowance for a family with a light purse to spend on hobbies…)
Pattern: None, it’s cut from measurements, using the typical square construction of underwear of the time.
Year: Late 14th century.
Notions: Unbleached linen thread.
How historically accurate is it? Pretty much; it is hand sewn with period stitches, using unbleached linen thread, waxed with bee’s wax. The cut is period, but the fabric might have been woven more densely.
Hours to complete: As usual no idea… the work I put in the past couple of days may be three hours perhaps.
First worn: Hopefully this summer.
Total cost: About 120 SEK ($18.40, £11.60 or €13.80), but that’s not counting thread.

As I said above, the construction is all squares and rectangles (the sleeves narrowing a bit towards the hems), with no shoulder seams: the front and back is cut in one. Gussets under the arms allow for movement, and slits in the sides does the same. 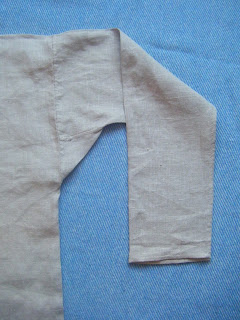 Running stitches with a back stitch every few stitches (sewn by Tobias) are used to sew the pieces together. I used hemming stitches to fell the seams and hemming the shirt. 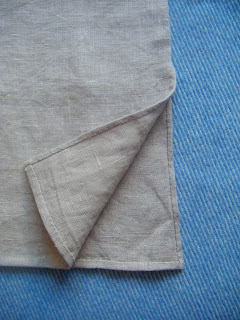