This past Sunday, 22 September, was Bilbo’s and Frodo’s birthday, now more commonly known as Hobbit Day. I wanted to have a second breakfast party to celebrate - well, I wanted a Hobbit second breakfast and this was a good excuse…  Now, we always go to church on Sundays, so it wasn’t a good day. Tobias and I decided to have it on 21 September instead, which is not a bad day either, as The Hobbit, or There and Back Again was published on that date in 1937. 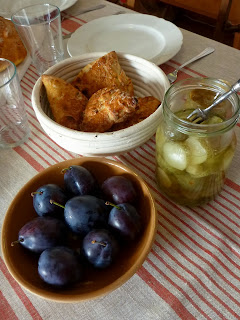 We invited some friends, two families with one little child each, but due to other commitments amongst all, we decided to make it a lunch instead, which also worked better with all our young children’s nap times. 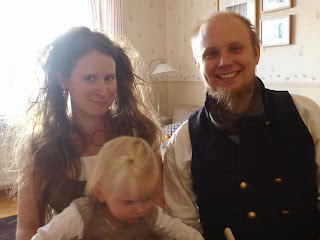 Anders and his family. Our camera didn’t co-operate, so nearly all pictures are from them.
I’m very grateful, as this post would otherwise have been very dull.

My Hobbit bodice was finished, and the skirt was almost done as well, but not enough for them to be worn. We all improvised Hobbit-y clothing (I wore my livkjol), and looked rather well. 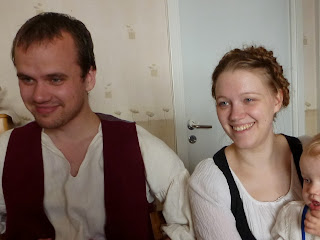 Tobias and I looking very tired: he’d been helping a friend to
move all the coming winter’s wood supply before lunch, and I’d been
whirling around trying to finish the last food and make everything look nice.


My hair turned out in quite satisfactory curls (except for the hair in front), and for me, who have very straight hair, usually refusing all sorts of attempts to be curled, that’s saying something. 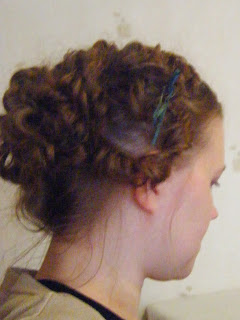 An attempt at Hobbit hair.
The only picture I've taken, and you might
tell from the quality our camera is on it's last legs.

The party was Dutch treat, and we all made food we thought might suit a Hobbit lunch table. I made a field mushroom pie (with tomato, sweet pepper, leek and cream), rösti/hashed brown potatoes, some nicely decorated carrot bread and small cookies, and provided butter, whipped cream and raspberry cordial. 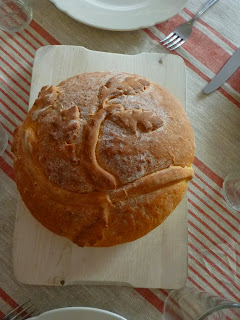 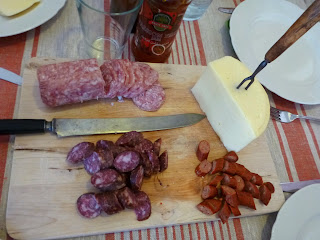 The table groaned, and we almost did the same after the meal was finished. 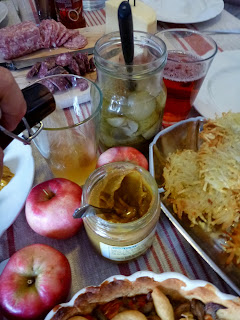 In the foreground: home made apple juice,
mustard, mushroom pie, apples and rösti.

It was a delightful little party, of a kind that we’re sure to host again. The only thing that I found to complain about was that it’s really too late in the year to go barefoot - it was rather chilly. 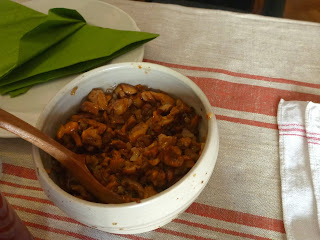 The second mushroom dish; butter fried chanterelles with shallots.
You can't have a Hobbit party without mushrooms.

I guess we just have to arrange a Lithe party. Lithe is the three Summer days outside the Shire calendar between the months of June and July, that were - together with the two Yule days between December and January - the “chief holidays and times of feasting” (The Return of the King, appendix D), an altogether much pleasanter time of year to go barefoot here in the North, and with the added advantage of being able to have it outside, which would be a much more suitable location than our flat.
Posted by Sarah W at 13:42:00