Last Saturday we visited the medieval fair in Söderköping. We were not there as a group (there being an event in Ronneburg, Germany, at the same time, which most members attended), but several members of Albrecht’s Bössor met there anyway. Two of them stayed the night, as they had a bit to travel. From one of them, Lisa, who’s a goldsmith, I received six pins to hold my veils – such a lovely gift; I had just been contemplating getting new ones. 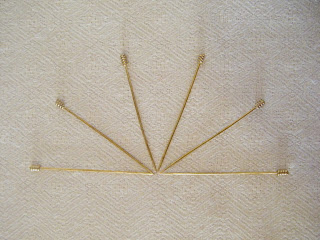 We all wore our late 14th century clothes, of course. Little B got to wear his shoes for the first time, and they worked quite well. He was so adorable, and we were stopped and asked for pictures several times. The marketplace was round an old church, which is situated by a creak with deep, steep banks. It was charming (in a “most-things-aren’t-historic-at-all-but-the-atmosphere-is-nice” kind of way), but we had to keep a close eye on B so he wouldn’t get to close to the water, or get lost in the crowd. 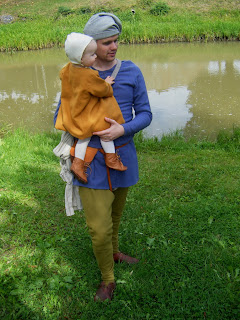 The pilgrim's satchel I made proved to be exeedingly practical -
it could hold much more than you'd think when looking at it.
It was also good to hang the baby sling from, when not in use...


A couple of things made an impression on me that I don’t get often enough when doing living history. First I was visiting the church, and inside four women where singing religious music in Latin, in several parts. The music was beautiful, and it was ringing and echoing from the high vaults. I got a fleeting impression of what it could have been like to enter a church in medieval times, and hear music of a beauty not often met with in a time with no way to record and replay it. It must have been like entering a small piece of Heaven.

The other thing happened when we were walking along the street, and were met by close to a dozen people on horseback. Though their fine clothes were not so much medieval as fantasy, I still felt almost intimidated by them, being physically so high above me, and riding with such a natural assurance of the fact that everyone would give way to them, as if they were truly in a different league than me and my small family, walking in the dirt left by their horses. I never have been too impressed by mounted knights at fairs before (some of them being a bit of a joke to the serious living historians, with knitted mail and polyester crushed velvet or cotton sheeting clothing), but now I wondered how it would have felt to meet a group of the high and the mighty in a time when you were more or less at their mercy. 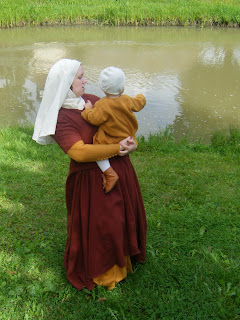 I tucked the skirt of my overdress in the belt worn between the layers,
to make it easier to walk. Overly long skirts may have been fashionable,
but they're not practical when having little children.


I felt quite humbled – I have hardly begun to understand the life and feelings of these people, my ancestors, at all. Sure, I try to make items as close as possible to those they might have used, but that is only to scratch the surface of history. It was a very welcome experience, and one I hope I can build and deepen my living history on.
Posted by Sarah W at 09:03:00