The past few years I’ve seen lots of people in Sweden making so called babynests. It’s a clever thing to create a cosy sleeping spot for babies, where they don’t have to feel exposed on a big, empty space, like in a cot. It’s also supposed to be safer to co-sleep with baby in a babynest than without, and you can put it pretty much anywhere, or bring it along when travelling. It is, I believe, originally developed for babies in neonatal units, but have since been adapted for healthy, full term babies as well. 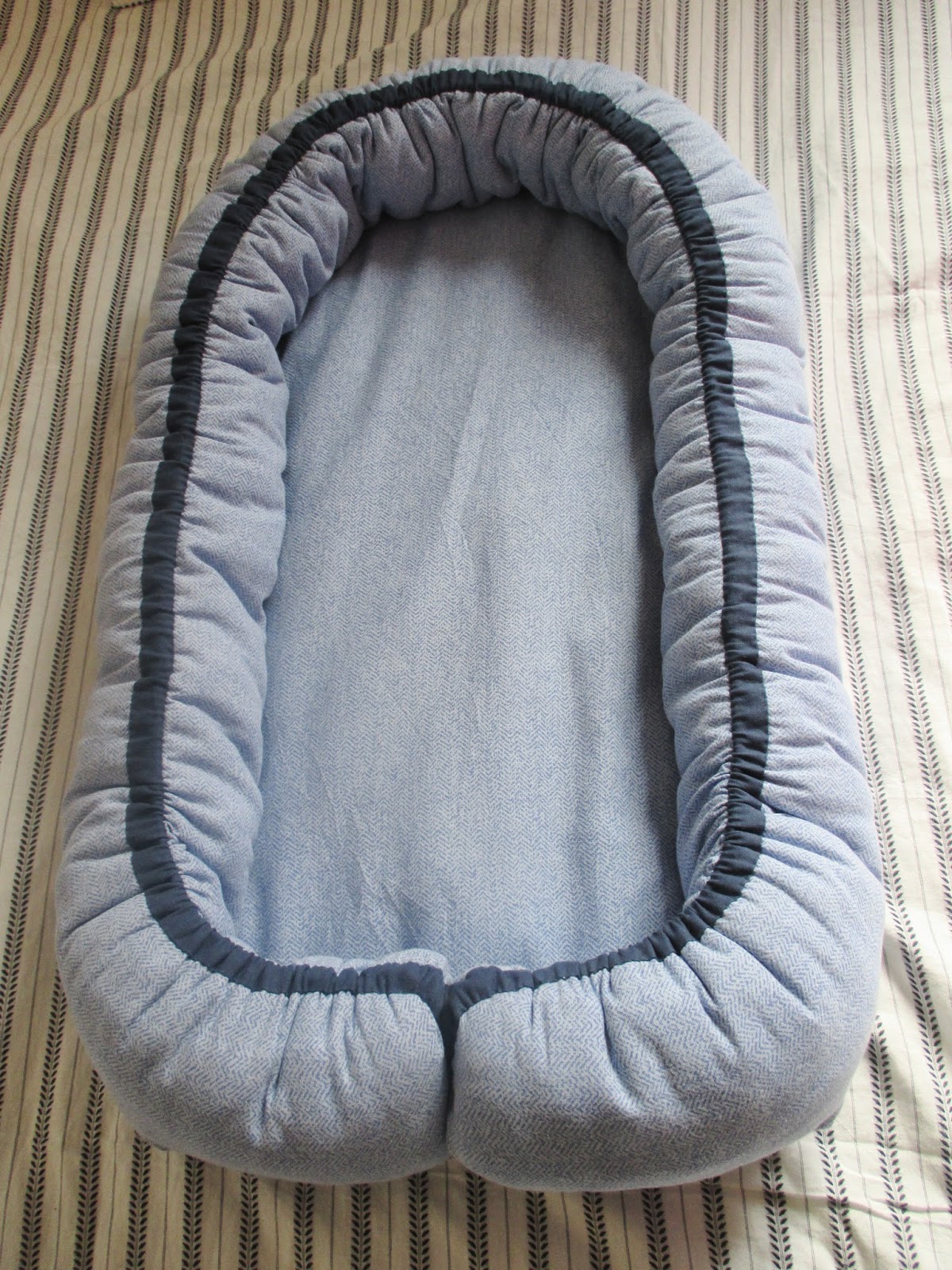 I wanted to make one when I was expecting B, but never got round to it. I improvised with a rolled up blanket in a pillowcase, which worked all right, but this time I wanted the real thing. As we have three floors in our house, and I like to keep my babies close, I want an easily moved sleeping place. I used this description (only in Swedish) for a starting point, but deviated slightly. For one thing I hand stitched the whole thing, so I worked in another order than the description said. That way I could work on it sitting on my bed watching a movie, or next to B, snuggled up closely, when he was watching a movie. I only used materials I had at home, so it has cost me nothing but time at the moment. The fabric, for example, came from a worn out duvet cover, that still had some sound areas. Instead of just throwing it into the bin, I used the good parts for this project. That the material's been used for so long also makes it very soft for baby to sleep on.

The function is quite simple: a padded bottom surface, and padded sides that are controlled by a drawstring, to change the size of the nest as baby grows. 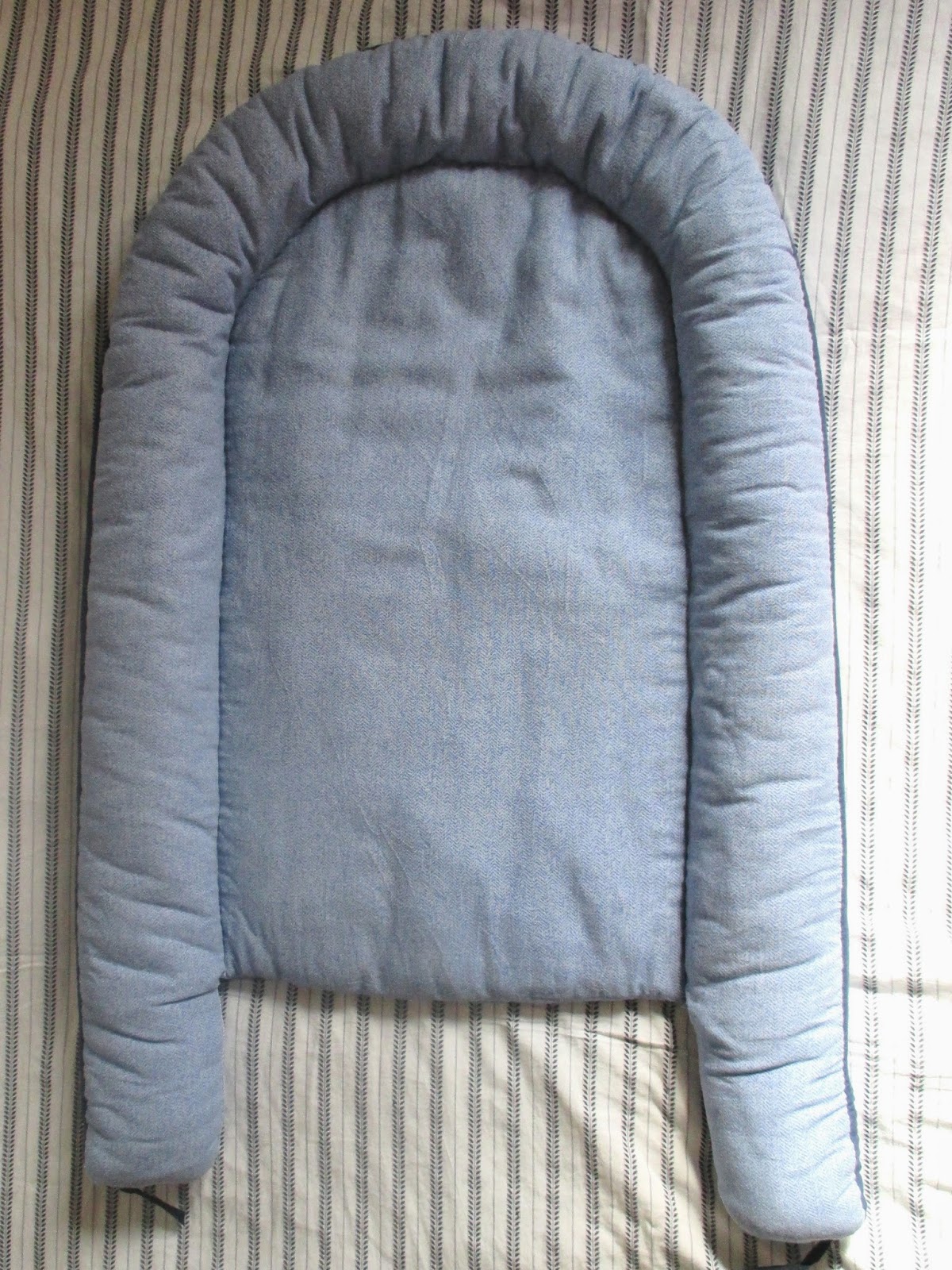 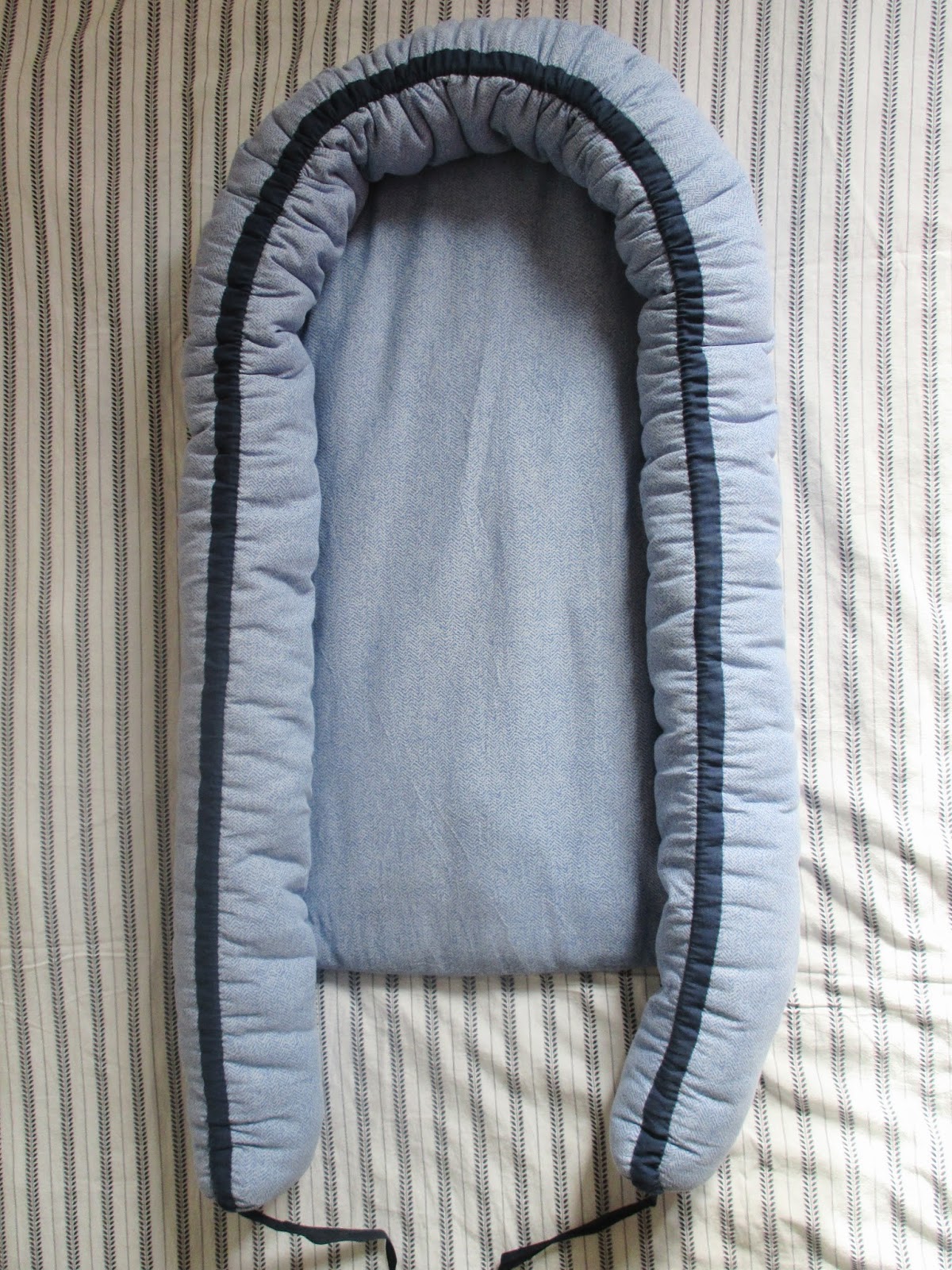 Slightly gathered, but not yet tied. 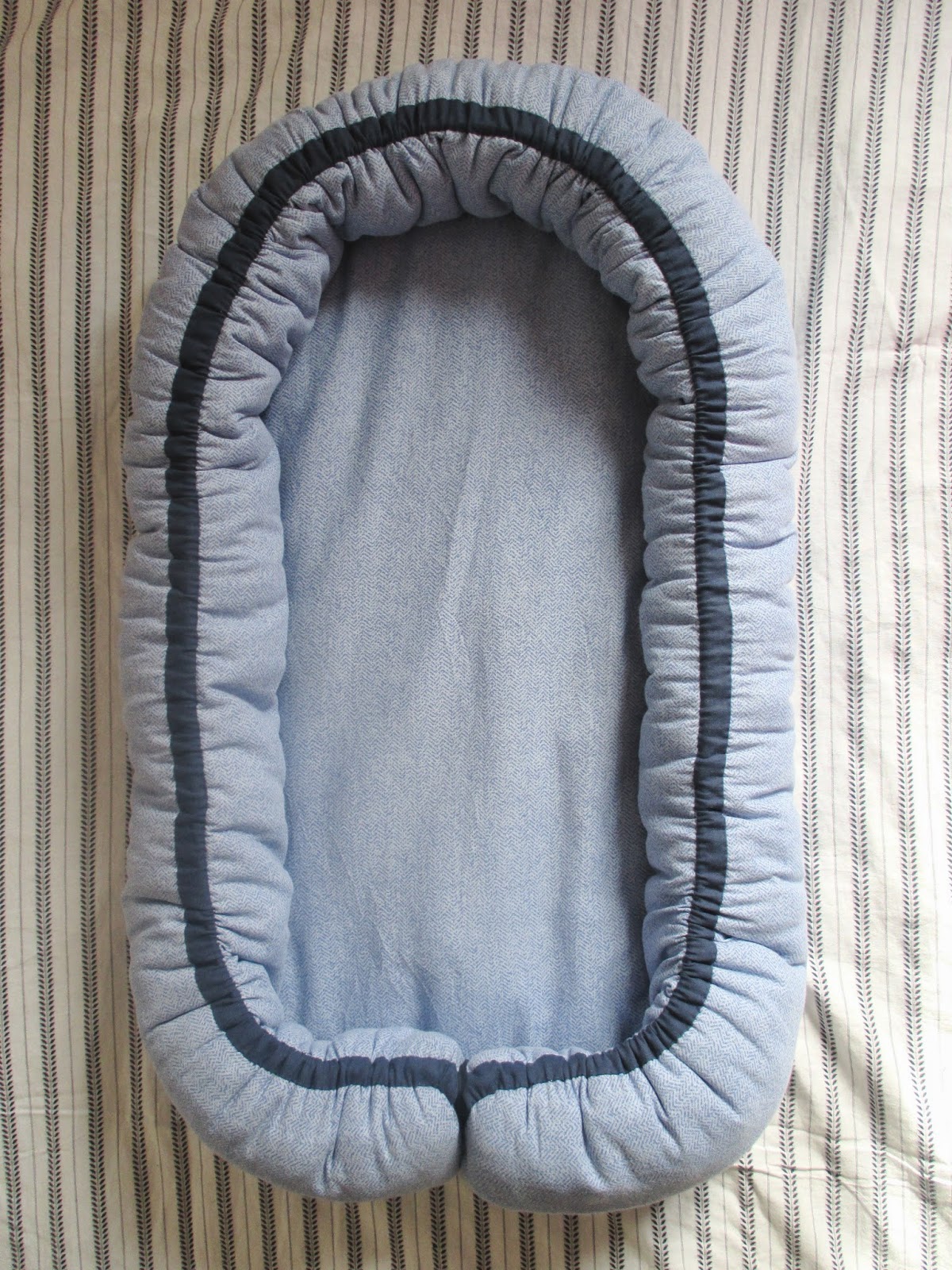 Tightly gathered and tied, the ties neatly and safely tucked away. 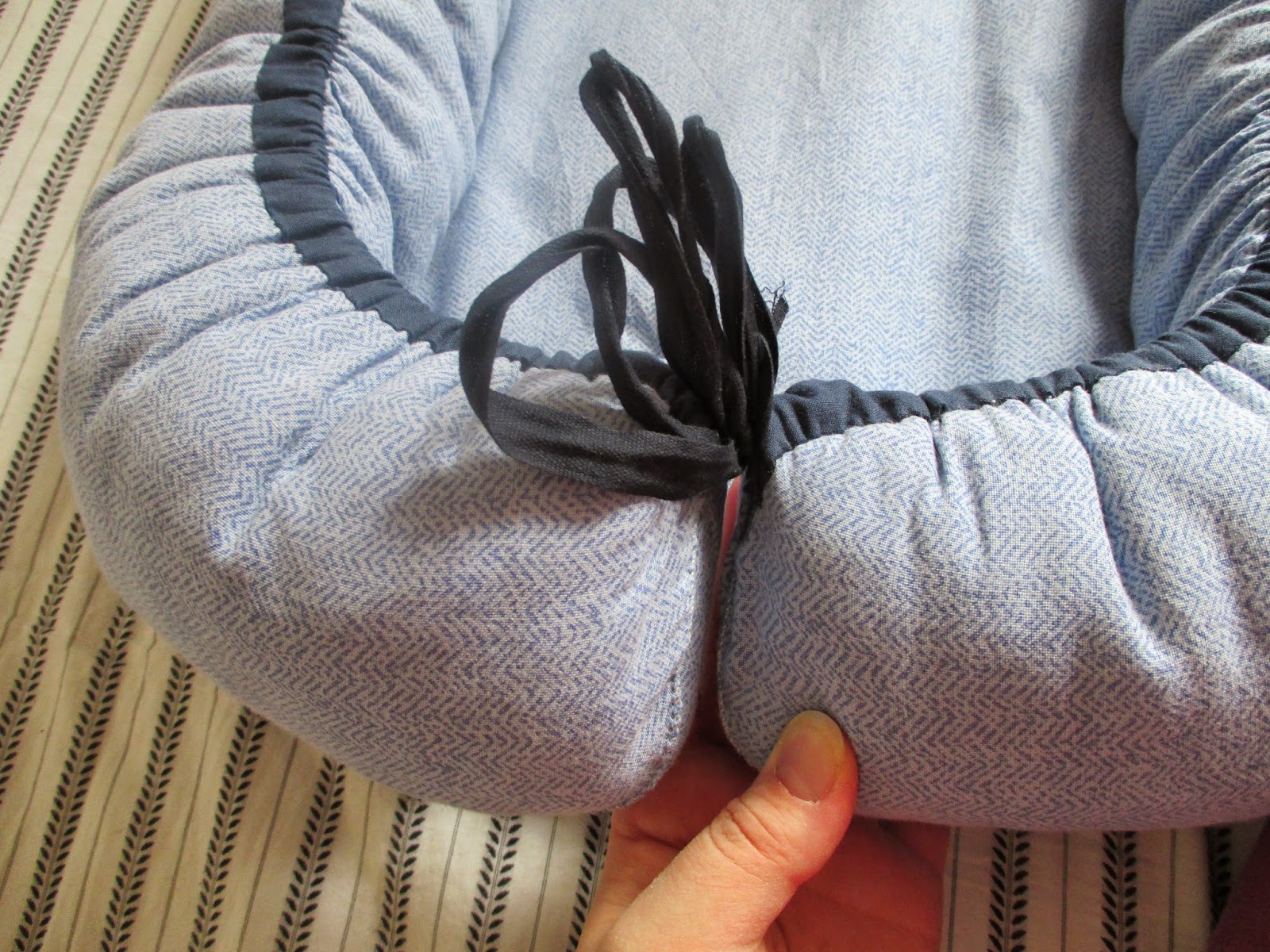 The drawstring tied at the bottom, before the ties are
wrapped round themselves, so baby won't get tangled.

The whole thing can be tossed into the washer at need, but I plan to make little sheets (including protective ones) for it, to minimize the frequency of that. Just need to think of a clever way to keep them in place, as there is no mattress to fold them round…. Buttons or ties are at the top of my mind, but we’ll see. As the sides of the nest cover the spot where I would attach the sheets, there are good chances baby will never get bothered by them.

I’m also working on a patchwork quilt for the little stranger. B got one when he was born, which he still sleeps with every night and every nap, and I want every baby (be there only ever two, or many) to have one.
Posted by Sarah W at 14:14:00