If all goes well we’ll be attending a weekend event in a month, and as always, growing kids need new clothes. B, now tree years old, can wear the blue kyrtle, though it’s a tad too short for him. But evenings tend to get cold even in the summer, there is always a risk of rain, and our usual camping place at this event is high up on a frequently windy spot, close to the sea, so having the possibility to add an additional wool layer is vital. Kyrtles are much more practical than cloaks for children at play, and as he’ll need a larger one soon anyway, I made him one from green wool, left over from hubby’shose. 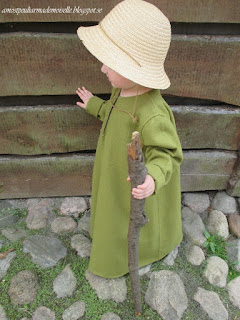 Quite long now, just clearing the ground.
That did not prevent any walking or playing though.

I made the kyrtle wide and long enough for B to still be able to wear it in both two and three years’ time. At the moment it just clears the floor, and the sleeves must be folded back twice, but in a couple of years, the sleeves will fit nicely, and the kyrtle will reach to about just below the knees, a good length for a boy that will be wearing men’s clothes, and not those of small children, as he does now. 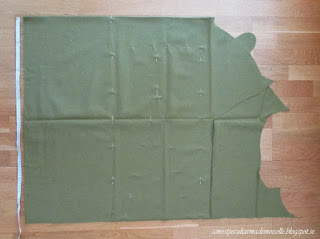 The whole kyrtle was made from this piece, about 150x75 cm, here seen on the fold.

The kyrtle is constructed from to main pieces, with two side gores that reach to, and becomes part of, the shaped armscye. A gore is also set in at centre front and back. This construction is found in several extant kyrtles called “Nockert type 2”. 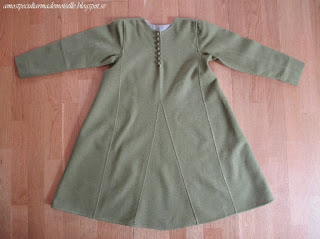 The sleeves are so called S-sleeves, with a gusset set in at the seam at the back of the sleeve. If need be, I can open up the bottom of the sleeves later and add buttoned closures. 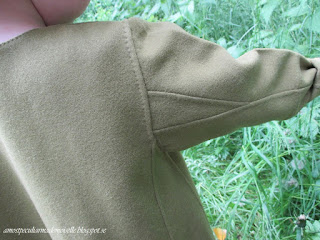 I needed to piece the sleeves a bit to get a kyrtle from the material I had, but that is perfectly period. It does mean that they took a bit more time to make than if made from one piece, but what you gain in one end you pay for in another. 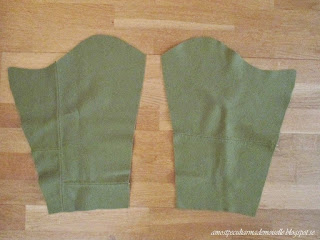 I lined the top portion with a soft linen fabric, as I usually do on my young children’s kyrtils, to prevent any itching or chafing that might happen if the shirt worn underneath slips a bit. Not perfectly period, but it won’t show, and it’s a cheat I’m willing to make, as it’s not my children’s hobby - they just tag along.

The kyrtil closes at the neck with seven self-fabric buttons and buttonholes. 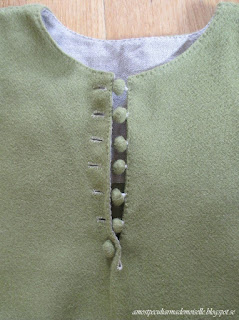 I sewed the buttonholes one after another, with the thread lying loose between them, as seen in extant examples. It is a very fast and practical way to sew buttonholes, not having to fasten the thread after every one, or letting it travel between the layers of cloth, though perhaps not the prettiest look… 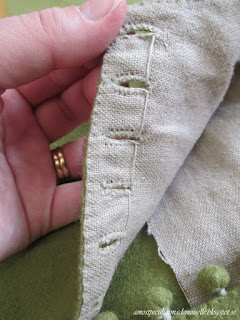 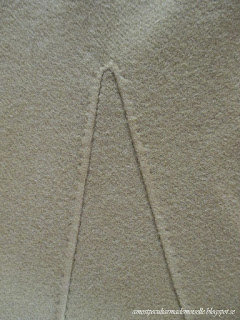 One of the gores, sewn into front and back.

The seam allowances and hems are rather narrow, ranging between 5-7 millimetres. 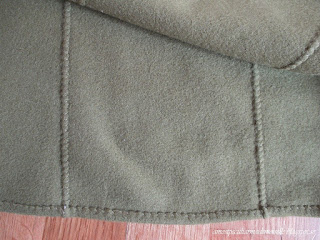 I submit this as a HSM challenge, though it’s more than a week late - the whole family got ill, so time and energy for sewing was a bit limited there for a while.
The Challenge: #5 Practicality

Pattern: My own, based on period kyrtles.

How historically accurate is it? Decently – I don’t think it would stand out too much if sent back in time. Though the cloth name Melton didn’t show up until 1823, the quality existed during the Middle Ages - mine is machine woven though. The colour is OK for the period, but artificially dyed. The stitches are all period, as is the construction.

Hours to complete: Abut 15, including piecing the sleeves. 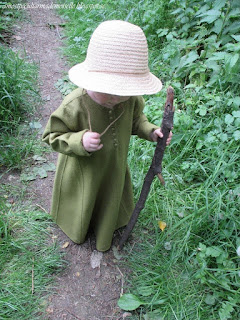 And terminology.... I've used to call this type of garment a cote in English, but I rather like the word kyrtle, as it's closer to the Swedish kjortel. Is there a difference, or are they just different words to describe the same thing? I wonder...