Making floating candles from empty kitchen towel/toilet paper rolls and electric tea lights for Harry Potter parties is quite common now, and there are several good tutorials online – Google or Pinterest it if interested. I won’t write another one, just show you pictures of how mine turned out. 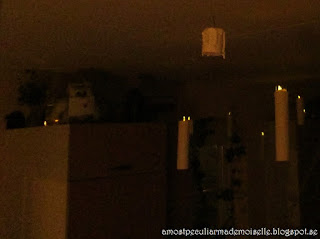 Most tutorials recommend using only kitchen towel rolls, as the toilet paper ones will look stubby. But I decided to use both kitchen towel rolls and toilet rolls, and cut down about half of them, as I wanted as wide a range of candle heights as possible, from as tall as they come, to as short as I could make them and still hide the tea lights in them. I felt that would make them look more real, organic, and interesting. 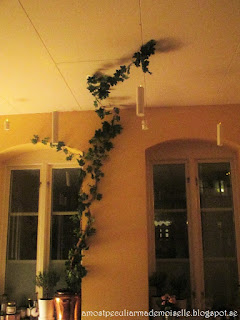 While most people let the “molten wax” (made from hot glue) run only halfway down the candles or so, I made it run down the length of some of the “candles”, and continue into thin air, especially on the short ones, to make them look as if they had burned and dripped for a long time. I wanted people to feel like they could get a splash of molten wax in their hair if they didn’t watch out. 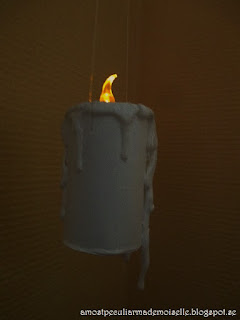 Our family not being big users of it, I would never have managed to collect this many kitchen towel rolls on my own in less than about two years, but luckily I received quite a few from my mum, mother-in-law and a couple of friends. In the end I had 33 floating candles in the kitchen, and two in the window next to the front door. I didn’t have quite enough electric tea lights to go round, especially since I wanted to use some to add depth to the other decorations, so on a few of the shorter candles I braided a “wick” from black yarn, and waxed them to make them behave like real, blackened candle wicks. I think it looked rather neat. 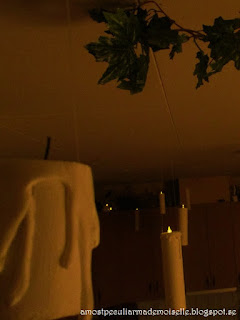 The electric tea lights are very weak compared to real ones, so having them as a principal light source is very impractical, unless you can afford hundreds. 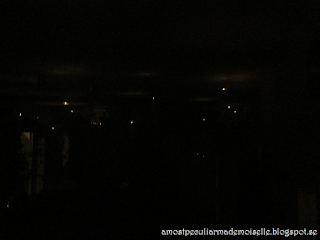 As a decorative element, however, they are very effective. As soon as our guests walked in they oohed and aahed, and exclaimed “it’s just like in Harry Potter”! I’m sure to make more of these for future Harry Potter parties, as they do look best in large numbers.
Posted by Sarah W at 08:14:00