In the winter of 2008/09 I began knitting a pair of plain Ca 18th century wool stockings, using the tutorial on Mara Riley’s page. Progress was pretty good, until I ran out of yarn just after I had made the heels. I had got this yarn for free, and it wasn’t available in the shops. Now, I did have an in-progress nalbinding project where I had used this yarn, so I set out to unpick it. Those of you who ever unpicked nalbinding knows how much time that takes, so when I had enough to keep knitting, I was rather fed up with the whole thing. I put the almost finished stockings away, and though I looked at them once a year or so, I never quite felt like picking up the work again until a couple of weeks ago. I knitted a lot over a few days, and they were finally done. 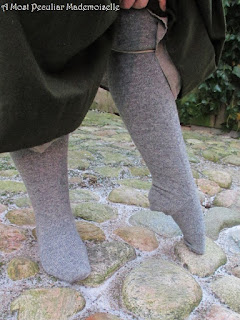 The yarn is a two ply (lace weight) natural grey wool, knitted on 2 mm (UK 14/US 0) double ended needles. The gauge is ten stitches per inch. If it's any help, the pair weighed 136 grams when finished. 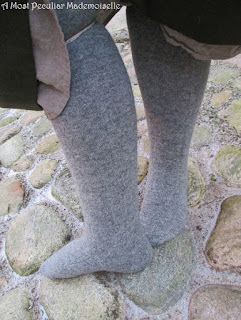 They are not the prettiest stockings seen – I wasn’t very good at knitting when I started out, so the tension between needles differed too much.  Still, a finished project is always nice, and not many will look at my legs up close – yay for long skirts! I took careful notes throughout the knitting process, and have become a better knitter, so hopefully the next pair (whenever I get round to them) will look better. 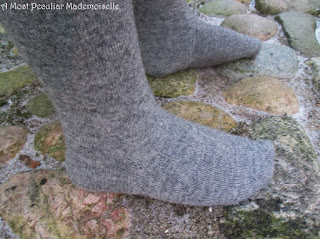 I feel mortified when looking at the stockings laid flat – my stocky legs and heavy ankles have been a sore spot with me since I was in my teens. At the same time I feel guilty for feeling like that – my legs serve their primary function well, which naturally is more important than how they look. Also, the uneven knitting is seen more clearly this way. 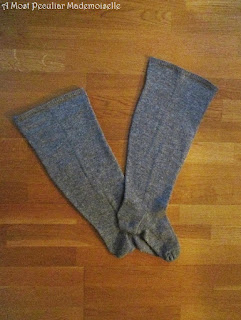 This will be my first challenge of the Historical Sew Monthly 2016.

Pattern: Based on the tutorial on the Mara Riley page.

Year: According to the Mara Riley webpage, 17th/18th century. Mine will likely be worn mostly for early 19th, they seem to be close enough to Swedish lower class stockings of that period.

How historically accurate is it? The techniques and material are all right, but execution is not too nice. I won’t rank it higher than tolerable because of that.