Yesterday I finally started on my wedding dress. About time, I’ll need it in less than four weeks…. I tried on my embroidered blue wool dress, and it fit almost perfectly (except for the sleeves, which I removed a while ago to remake), so I used that to trace a new pattern. The blue dress consisted of a front and two back panels – the wedding dress will have one front-, two side- and two back panels. I think the width of the skirt will be more evenly distributed that way. Also, the blue dress got most of its width from triangular gores sewn into the side and back seams. The wedding dress will not have any gores, as it’s not supposed to be medieval. Instead I have used the full breadth of the fabric for the hem of each panel, so the skirt will have a circumference of about 4.5 meters (177”), most of which will be in the back.

Yesterday I also cut out the fashion fabric (cream coloured velvet), and basted all but the front and one back panel to the lining fabric. I did those today. I plan to treat the velvet and lining as one, and don’t want them to shift before I get them sewn. 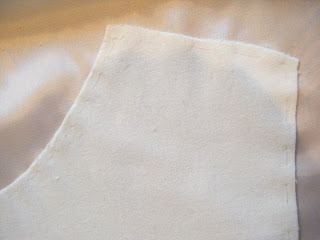 I had planned, and looked forward to start sewing today, but found that I had some schoolwork that was to be handed in much sooner than I’d expected. Ooops…

Work on the apartment is slowly progressing. Tobias proved to have some hidden decorating skills (they where new to me, anyway), and quickly organized a “tranquil corner” for us to rest our eyes on, when trying to fix the rest of the mess. 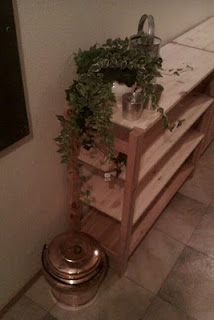 Further down the top shelf, there is now a few of our books and movies, with antique irons as book supports. 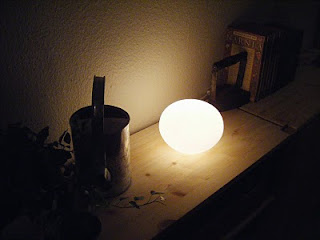 Unfortunately this picture is rather dark… It’s slowly beginning to feel like home – most of my belongings agree with most of his belongings, if that makes sense. They look comfortable together, not like intruders on each others space. It does feel a little bit weird that we are both going to live there, though… nice, but weird.
Posted by Sarah W at 22:59:00