Tobias and I had a sort of lecture, for want of a better word, in our church last Wednesday, on the 14th century, as there is a medieval fair in a neighbouring community this weekend, which many attend. To add interest we served “Heidenische Erweiz”, Heathen Peas, based on Peter’s interpretation of a German mid 14th century recipe - go there for more information. 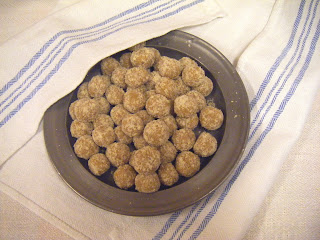 "If you would like to make peas from Bohemia, take almond kernels
and beat them very small and mix with a third as much honey.
and mix well with good spice, so it is at its best.
this food can you give cold or warm."

I made some slight alterations to the recipe. As I was tired and running out of time, I used almond meal instead of grinding almonds myself. I suppose the meal was a bit finer and drier than freshly ground almonds would have been, so I had to add a bit more honey than the recipe said. It turned out very well indeed, I think. I took a lesser amount of black pepper than of ginger, and it seemed to be a good mix – even little B loved it.

I spread the hot mixture on an oven paper and let cool. 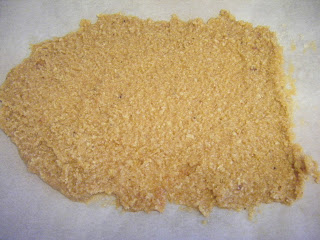 I had planned to do the simple version, and just cut squares, but I don’t think I’d boiled the mixture long enough, so it was still rather sticky. I decided to make “peas” from the soft mixture after all. To prevent them from sticking to each other I rolled them in almond meal. It both looked and tasted very nice, and was quite popular at the lecture.