I wrote this a couple of weeks ago, but, well, things happened. I’ll post it now anyway, as I’m emotionally recovered enough to begin to find my usual pursuits interesting again.

I’ve always been a master of beginning new projects, but not as good at finishing them. I have worked hard at fixing this flaw of character, and I’m getting better. Still, I sometimes stumble on sewing projects that have been in the Limbo of Unfinished Objects for years and years. One such I now saved from its sad state. I had, when I was in my very early 20s, made what I intended to be a 16th Century German flat hat. It didn’t work out as well as I’d hoped, so a few years later, after having seen the wonderful scene of Diagon Alley in Harry Potter and the Philosopher’s Stone, I cut out pieces to make the crown of a witch hat, intending the failed flat hat to become the brim. And then life distracted me. 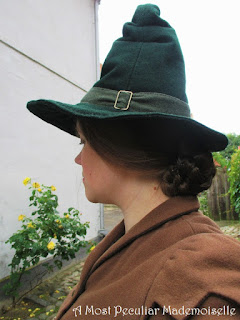 But now that witch hat is done! It took only a couple of days’ worth of sewing now and then to finish it, using only stash materials. It’s made from a beautiful deep green wool, stiffened with ironed on interfacing. It’s lined with a cotton fabric checked in white and greens. 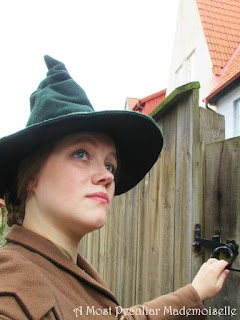 The brim is decorated with quilting in a swirling pattern, which also adds stability. A wire (two overlapping wires actually – I didn’t have one long enough) stiffens the edge of the brim. 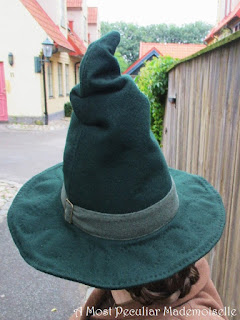 The crown is stitched down in permanent creases, to give it that iconic witchy look. It’s decorated with a strip of lighter green wool and a simple buckle. I had hoped to trim it with plumes and feathers for the photo shoot, but they all seemed to have got lost in my stash. Ah well. A couple of ostrich feathers fell out of my feather duster when the kids were playing with it a week or so later, so I took them to temporarily trim the hat with for an additional photo. Sadly, the hat came out just a bit too small, so I’m going to sell it on, and let the new owner add trim, if they wish it. 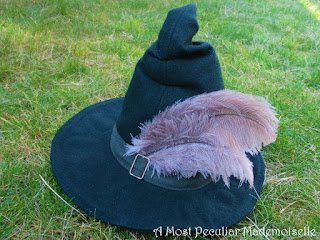 This was such a fun project, and I’d love to make more hats for witches and wizards. They would look great for our annual Harry Potter Halloween party. Only problem will be to fit the making of them in between everything else… The boys have already requested wizard’s hats for their dress up box – they loved wearing this one. But any hats I make for them will be in a simpler, more easily washed, materials.
Posted by Sarah W at 09:45:00