Medieval Socks and a WWII Dress

Seems a bit silly talking about wool stockings when the temperature has been in the 90’s for the past few days (almost kills me, it does - feels like it, at least), but here goes:

About a week ago I finished a pair of socks in a technique called nålbindning / nalbinding / needlebinding. It’s an old technique, found, amongst other places, in ancient Egypt as well as in Scandinavia and the Viking-ruled part of Dark Age Britain. It pre-dates knitting by hundreds, probably more than a thousand years, and was regularly used in some parts of Scandinavia well into the 19th century for mittens and socks. This makes it perfect for re-enactors doing Viking- and middle ages. You use a rather big, flatish needle made from wood, bone or horn, and you use torn-of pieces of yarn (usually very, very long - you want to piece them as seldom as possible). You then sew the sock, mitten or whatever, stitch by stitch, using your thumb as a base. When you come to the end of the piece of yarn, you lay it together with a new one, wet the join and rub it between your hands until it felts together. The fact that you sew them like this makes them very sturdy – if the yarn should break somewhere while you’re using the sock, that’s all that happens – the sock won’t unravel. However, if you want to go back and change something, that takes quite a while. There are a lot of different stitches, so one thing made in this technique can look a bit different than another one. 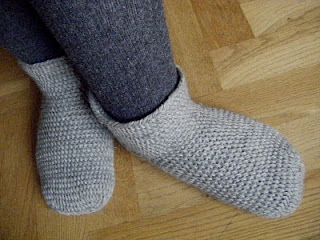 I learned the technique from a re-enactor friend some years ago, and began making the socks at that time, but they have been forgotten amongst all my other projects until the event two weekends ago, when I brought them. The other ladies there had brought their nålbindning projects as well, and they where so much prettier than my poor socks and, most of all, they where finished. So last week I sat down and finished mine, even brought them with me to work, and made everyone at the lunch table curious. Turned out one of the girls there recogniced what I was doing, and when I asked her how she knew, it turned out she's a re-enactor herself. Figures.

I then tried to felt them, as that seems to have been very common, making warmer and (again) sturdier clothes. Unfortunately, it would seem I used super wash wool, so it wasn’t very easy, and I couldn’t get them as felted as I’d have liked, but they will do. 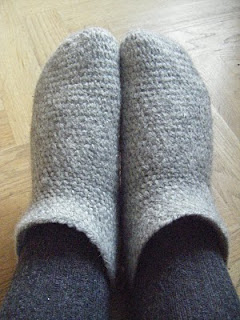 And now something completely different: last weekend I began making myself a 1940’s dress from the polka dot fabric I bought some time ago. I use a pattern I made some years ago, having looked on the outside of a Vogue Vintage Pattern for inspiration. I have used that pattern once before and rather liked it. This is the shoulder detail.

Now I’m going to continue working on it, and to watch the first season of Foyle’s War that I bought today. Always nice to watch something from the same era you’re making clothes from, I think it’s inspiring.
Posted by Sarah W at 19:47:00