Last weekend I went to an event with the late 14th century group Albrechts Bössor (Albrechts Gunners), and it was brilliant. I really liked the people, and five of them have blogs that I follow. Nice to meet the persons behind the words, but it feels a bit silly writing about an event when I know some of the people who where there will be reading it, and probably have experienced it from a slightly different point of view. Anyway, the event was a medieval faire held in the old fortress at Varberg. The market part of it wasn’t very good – actually, it was mostly horrible, with crushed velvet and poly-satin dresses, plastic swords and goth jewellery being sold, and street performers in silly costumes – the usual stuff. Most of the good tradespeople where at a viking festival down south, I believe. Too bad, I had hoped to buy some fabric… Still, there where a few good things and most people seem to have had a good time.

The weather was sunny with the occasional wisp of very thin cloud, extremely hot and rather windy the first day, and stiflingly still and windless the next. We all kept reminding each other to drink water and rubbing on sun block. 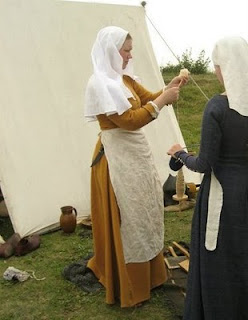 As night fell it got a bit chilly, which was nice as a change. I find I'll have to make myself another dress to go over the yellow one; it got a bit too cold. The london-hood proved to have been a good thing to have sewn, very cosy. 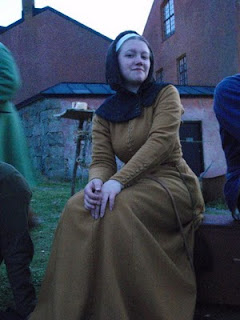 Picture by Elin
We slept quite comfortably in hand sewn tents, on woollen blankets laid out over straw. The group is very particular about authenticity, which is why they caught my interest in the first place, and one of its main aims is teaching and educating the public, so the camp and equipment was kept as closely as possible to how it might have been back in the day.

The food prepared by Peter where based on recipes from 14th century cook books. Forget boiled vegetables – it was deep fried pies filled with meets and cheese, porridge served with raisins, cinnamon, and almonds, omelette, and bread pudding served with butter and cinnamon, with a smoked herring on the side. Yummy! 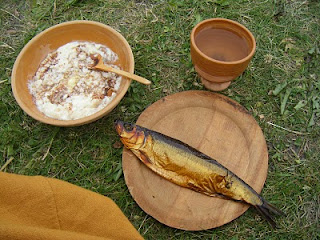 As all re-enactors and living historians know, the commonest task, when done without electricity, is extremely interesting to the public, and everything gives an opportunity to teach. I had the pleasure to explain about spinning and sewing, and to let a few children give carding wool a try, which they where thrilled about. Maria, Elin and Anna explained about qualities of wool, weaving, plant dyeing, needle binding and embroidery. Being a military camp, of course there where demonstrations on fighting, armour and weapons, but being extremely ignorant in that area, I won’t even try to report on it as I’m sure to get it wrong.

I spent most of the weekend in our camp, helping with the cooking (which included fetching water and wood), sewing, needle binding, playing with the children in the group, visiting with the others, and learning how to spin on a drop spindle. I had tried that quite a few years ago, but it didn’t turn out very well, now though, it went much better, having gotten some tips from Maria who’s very talented in many textile crafts. After a while, I could even manage to spin while walking. It was so fun that I’ll have to buy another drop spindle now, which is not good at all – I really don’t need any more interesting things to take my attention from the many projects I already have, waiting to be finished. 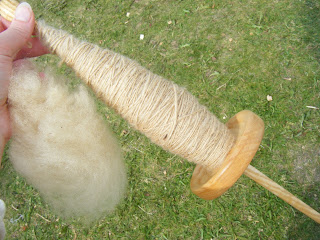 So, that was my weekend, and a really nice one it was. To those of you who where there, thanks for making it so good, and I hope to see you all again soon.
Posted by Sarah W at 18:10:00