The summer of 2008 I was going to a Viking age event, and I made an apron dress for it. Tricky, since what we know about them is very, very limited. I can't say mine was historically accurate, since, so far, there's not been found one surviving apron dress to show what they looked like. There's pieces and fragments of varying sizes, but considering the many different interpretations people make, those fragments are not enough to get a clear picture. I made my interpretation based on the little information there is. It might be completely wrong, but it worked, looked pretty, and is, in my opinion, not too unbelievable. (No, the baby isn't a relation of mine; I just like to babysit.) 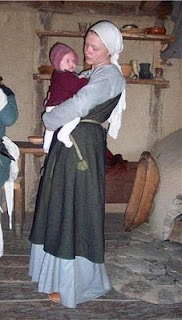 The dress was made from a green and naturally black woolen fabric with a herringbone weave, cut to be open, but overlapping in front, with gores in the sides to add enough fullness to walk. Actually, it was just a rectangle with gores sewn in where the sides would be. The dress hung from linen loops (very short in front and long at the back), which was then joined by oval bronze brooches. In the front I had four very short loops, so that each brooch held two front loops - that's how I made the dress overlapping. Some finds indicate that double loops was used at the front, and this could be one way to do it. I think woolen loops are prettier, but linen ones seem to have been more common in Denmark, and since the part of Sweden I was born in, and where the event was held, was a part of Denmark at the time, I did them the Danish way. 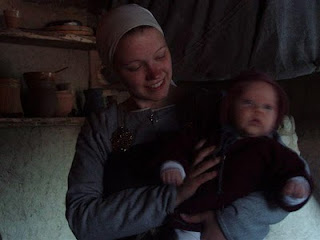 A couple of months ago I took the dress out, and to my horror big holes had been made in it by carpet beetles! Had it only been one hole I could have mended it and used the dress anyway, but the way it looked, that was not really possible. My other woolen dresses was mostly unharmed, luckily. I wrapped the destroyed one in a plastic bag and put it in the freezer for a week, to kill the remaining dress murderers, and sat down to think of what to do now.
Between the holes, there was still quite a lot of fabric that could be used. So the day before yesterday I decided to make a late 14th century hood. I did a bit of research, and the hood will be based on one of the several found in London, dated to late 14th century. It has a gore at each side, and a button closure at the front. Herringbone weave is not what you think about when talking 14th century clothes, but it's what I had at hand, so it has to do. I can't really imagine a whole continent suddenly giving up on weaving that pattern, even if it wasn't the most fashionable... but that is my very un-scientific thoughts. I'll avoid making any other 14th century clothes in that kind of fabric, though.
I then made the pattern and cut out the top fabric. I messed up... I wasn't careful enough, so when I had cut the pieces out, I noticed that a hole was at the top of one of the hood halves. Idiot. I had to trim it away enough not to be seen when finished, and that left what will be a hood that is slightly to tight. Annoying.
The lining will be in what I'd call a soft woolen flannel, brown, that I had leftover pieces of at home. I have an old, early 14th century cotte made from that wool, and it's a very comfortable fabric, not at all itchy. Both the top fabric and the lining had to be pieced in several places for it to work out, but that's a period practice, so I didn't mind, except that it's rather boring sewing all of those little seams. The top fabric is only pieced in two places (not including the gores at the shoulders - they are part of the design), but the lining is pieced in five places. I decided not to have a liripipe on my hood. Had I had one, that would have meant even more piecing, but it wasn't the reason I decided against it. I just get annoyed with a liripipe, I took it of the last hood I had.
I basted the layers together before sewing, since I planned to sew the lining to the seam allowances of the top fabric. That way it will be perfectly smooth, the same size, and won't pull in a different way than the top fabric. This is the way I do it: after a seam in the top fabric has been finished and the seam allowances sewn down, I fold the lining so that they meet at the seam which with the top fabric was sewn together. I then make sure to catch a few threads of one lining piece, then a few threads of the top fabrics seam allowance, and finally a few threads of the other lining piece, in every stitch. It looks tidy, and the lining won't move at all. A bit difficult to explain, hopefully you'll understand what I mean. Not sure if it's period for 14th century though.... still, it's better than baglining it would have been. Unbleached, waxed, linen thread is used for this project. 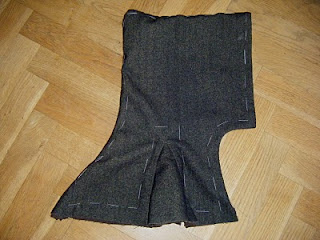 Before I went to bed last night I had finished all but the back seam, the bottom edge hem, and the buttons and buttonholes. Hopefully I can get most of that done today.
Posted by Sarah W at 10:33:00