Last night my boyfriend Tobias proposed, and this morning I said yes. Not that I had any plan of refusing him, I just had to get used to the idea of saying yes. (I think he was glad there was a snow storm last night though – he just might have been a little worried that I’d run away during the night, haha.) So, there it is; I’m engaged. Wow. How did that happen?? A month ago I didn’t even have a boyfriend (we’ve been dating for almost four weeks), and for the first time I was happy being single, and had no plans on a relationship for a while. And yeah, this might be a good time to think “those crazy mormons” ;)

It’s not as bad as it sounds though – we’ve both known of each other and each others families since we were children (one of my first memories are of his parents visiting me in the hospital as a little girl), we just never thought of the other in this way before now. I'm not very good at expressing my feelings, so let it be enough to say that as surprised as I am, I’m also very, very happy.

Marrying early is the pattern we’ve got from our parents; my Dad proposed to my Mum a little less then a month after they first met, and three months later they were married. My fiancés parents’ story is similar. Actually, marrying early is very common in the church. I can’t see a problem with it – most people nowadays seem get intimate and some move in together much sooner than we got engaged, which from where I’m standing is much more odd. Because of our faith, chastity is important to us, so we choose to marry.

This afternoon we went ring shopping. In Sweden the couple exchange rings when getting engaged, and so, it’s as common to buy rings together as being presented with one at the proposal. I must say I prefer to have had the chance to choose – I wanted to make sure I got a ring I liked, one that “felt like me”. The one I chose is very simple, an unadorned gold band (again in keeping with Swedish tradition), just like I’ve always wanted. It will take a few days for us to get them engraved, but when we do get them I will, of course, post pictures.

And you all know what this means: I must design and make a wedding dress for myself! How I’ll manage that with my still present tiredness (and school), I’m not sure, but it’ll work out somehow. My biggest problem right now is how I want it to look (Tobias laughed when I said that)….. I’ve got two or three ideas that I can’t really choose between….. I must say, that it’s a very pleasant problem to have :)

Email ThisBlogThis!Share to TwitterShare to FacebookShare to Pinterest
Labels: reflections on life

I’m very tired, so this will be a short post. (Some of you might be interested to know that my constant tiredness have been found to be the result of a pretty bad imbalance in my vitamins, which I take supplements for now. Hopefully I’ll be back to normal soon.) It’s also a little bit late (going by Swedish time here), the batteries in my camera died.

Thank you all who commented on my last post and wrote something about yourselves! It was very interesting for me to learn a little about who reads my blog – the internet is usually very anonymous, and you have no idea about who reads, and what they find interesting. Please keep telling me, I really appreciate it!

Now for the giveaway winner: the slip of paper that came up had Kajsa’s name on it. Congratulations :) If you’d be so kind and post a comment with your name and address (which of course I won’t publish), I’ll send it on to you. I hope you’ll like it. 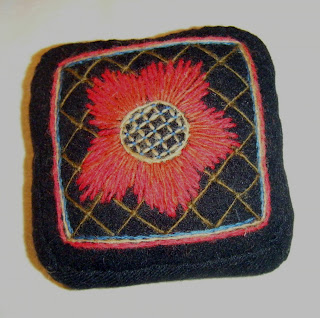 This is my 100th post. Wow. I’ve been very interested in seeing where you, my dear readers, are all located. I’ve had visitors from the USA, Sweden, Germany, Australia, Canada, Poland, Israel, Egypt, the Netherlands, South Korea, China, Pakistan, Denmark, Finland, Russia, Latvia, France, Kenya and Austria, amongst others.

Some of you are my real life friends, others have become my friends over the internet, and some are complete strangers, but you’re all equally welcome and appreciated. To show my appreciation I will have a giveaway. Today I’ve made a wool embroidery, which will be made into a pincushion similar to the one I made a few weeks ago. 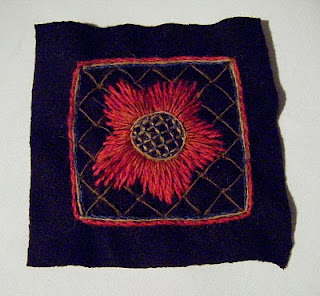 It’s free hand embroidered on black wool, in blue, yellow, olive green, and two shades of red. The embroidered square is 7x7 cm. If you are interested, post a comment (if you’d like to say a few words about yourselves that’d be nice), and I will draw a winner next Sunday.

Actually, the reason I’ve not posted for a while is that I wanted to host a giveaway, but didn’t have time to make something suitable until now. A lot is going on in my life, and the past week I haven’t got any sewing done – however, my corded petti is getting close to finished, so I’ll post about that shortly. Then I have a lot of other things I’m working on or planning – so much I want to do, so little time :)
Posted by Sarah W at 21:32:00 7 comments: