It’s been a month already since I had my baby. We have named him Birger (type it on Google Translate, choose Swedish, and you can listen to how it’s pronounced – it does not sound similar to burger…), an ancient Scandinavian name meaning something along the lines of “the one that helps” and “protector”; hopefully a fitting name for a future elder brother and, in the more distant future, husband and father. This first month he and I have mostly spent on the sofa, as he wants to breast feed pretty much all the time. Tobias has been wonderful, taking care of most of the cooking, washing up, laundry, taking B once in a while so I can get a nap, etc. He’s a brilliant husband and father. Now, slowly, B and I are getting into something of a routine, and I can get a few minutes here and there to do housework, or even a tiny bit of sewing.

For the time being, I keep to a very simple hand sewing project, which I can take up when I have a minute (usually when B takes a short nap in my lap before returning to his eating), and don’t need any thinking as to what I should do next. It’s a log house patchwork block, which will be made into a pillowcase. Traditionally, the middle square should be red or black. Mine is not traditional, and I use strips of fabric left over from another project, so I have to accept that I only have short strips of some fabrics, and so can’t always use them in the order I’d have preferred. 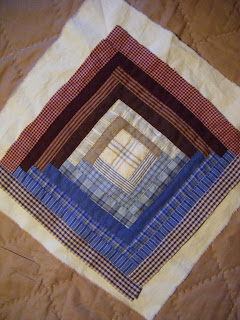 Not the most artistic piece of patchwork I’ve ever worked on, still, being able to sew again is a delight, even though I just manage to make a few stitches here and there. I use running stitches as decoration (there is no batting to quilt), which ads a nice finishing touch, I think. I’m thinking of adding some embroidery on the two light strips (which I don’t like) in the brown corner, to give the illusion of a darker shade that won’t stand out so much.

I do have a lot of time to plan future projects, though, so as soon as I have the time I’ll get cracking. I’ll need to make another 14th century shift for myself, a complete outfit for little B, some new things for Tobias, and I’d like to make some new summer dresses, fit for nursing.