For those who never read my blog before, my greatest hobby is researching and making historical clothing, and I’m also a sucker for Disney. The idea of designing (or sewing) historically accurate clothing for the Disney characters is something that has intrigued me for years and years. It's been done several times by very talented people, but I thought I’d give it a try too. I began with Snow White. I’m not sure why… maybe because I knew immediately how I wanted her to look.

I placed Snow White in (what is now) Germany, in the 1520-40’s, as it’s originally a German fairytale, it’s a place and period I like, fashion wise, and the slashed sleeves of the Disney version could hint at it. The laced bodice of this fashion also ties back with the story as it was written down by the Grimm brothers, where one of the Queens’ murder attempts was to lace Snow White’s bodice too tightly. I decided to only keep the colours of Disney’s Snow White, and for the rest do whatever I wanted to, or had to do, to make it more historically accurate. The colours is one of the most iconic things of the Disney characters, so hopefully that will make her somewhat recognisable, even after the brutal historical makeover. Both the clothing and the composition of the picture have been inspired by the art of Lucas Cranach the elder. 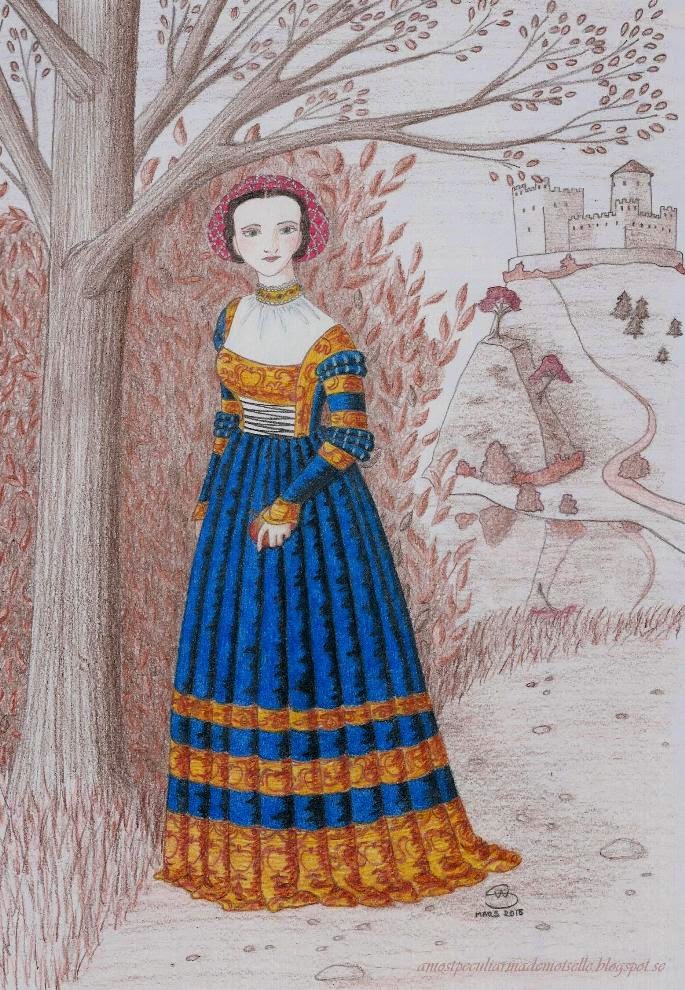 The picture can also be seen at DeviantArt.

Now a disclaimer: I’m not an artist, though I like to draw. I have no more training than I got in school, and what my dad taught me when I was a little girl. I only have the most basic artistic materials to work with: I’ve been using an ordinary pencil and some coloured ones. Thus, this is no artistic masterpiece and probably contains all manner of newbie mistakes. Also, I’m not an architectural historian, so that castle may be very wrong indeed. If so, constructive critique (preferably involving links to pictures) is welcome. I like to learn. The trees and mountains might also be wrong, so if you’re a botanist or geologist, don’t look too closely. All I know is fashion history and sewing, so focus on the clothes, please :) I chose to have the background in mutes, almost sepia, colours, to put focus on Snow White.

In my research I first had a hard time finding evidence of blue dresses in the chosen time and location. Red hues seem to have been the fashion, at least if you look at most of what Cranach painted. But there is this one (at the further end of the fountain, under the tree) that looks very much like the dress I ended up drawing: 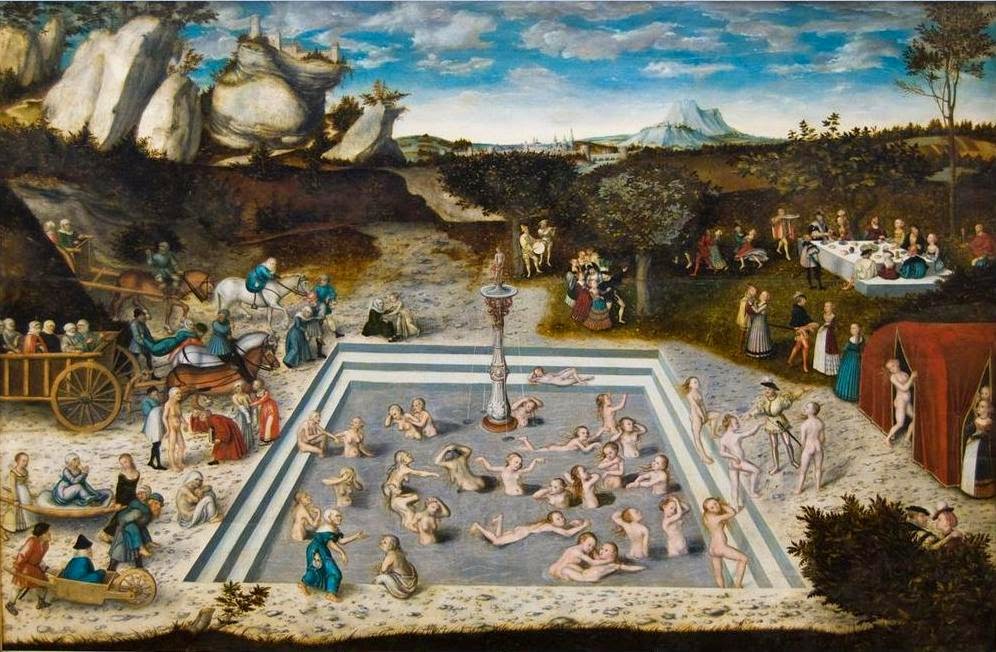 The Fountain of Youth, Cranach the Elder, 1546

And just now, as I was working on this blog post, I found this little gem - I know nothing about it, so please share if you do: 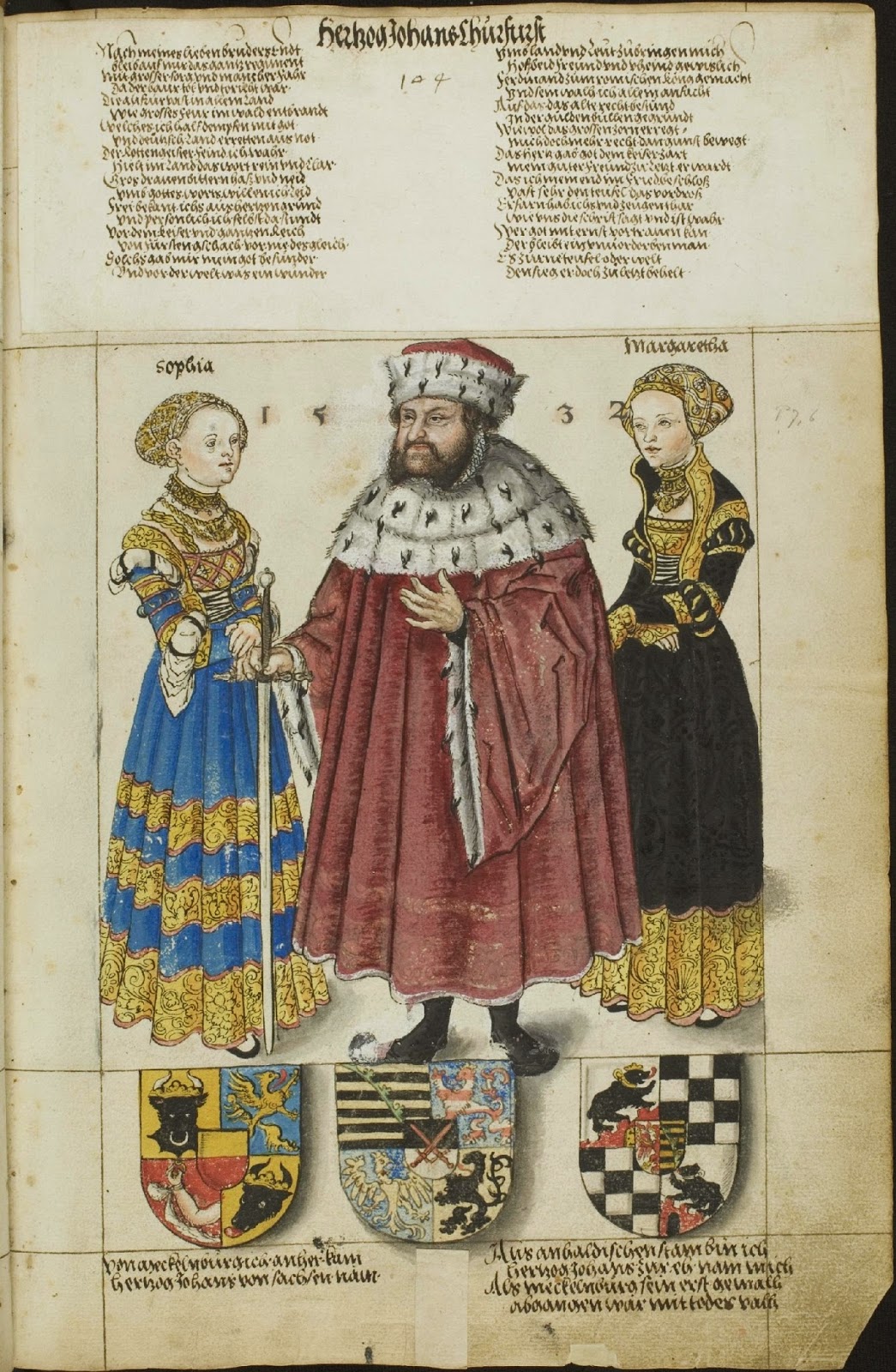 I'm now very pleased with the colours I chose for the dress, as you can imagine.
The headdress is more often than not shown in a golden/orangey colour, not red, but I wanted red, hinting at Snow Whites bow in the film. I suppose I could have used a hat for that - I might have done it differently if I did it again, but, well, done is done. Also, Cranach preferred reddish blond women in his paintings, but that would obviously not do for Snow White.

The lacing in front of these dresses could be in the form of either a spiral (looking like a zigzag when open) or a ladder - I like the former, so that's what I used.

I based the sleeves off of this painting: 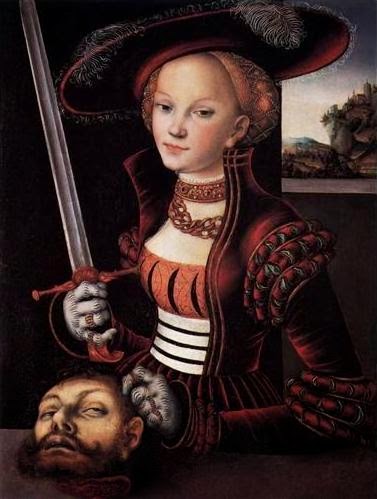 These kinds of dresses were often worn with several heavy gold chains, but as I wanted a more elegant look, I decided to only keep the choker. A similar arrangement is seen in this painting: 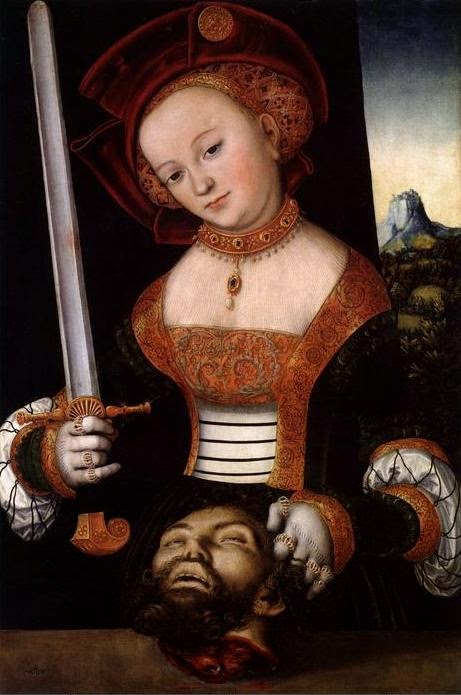 Judith with the Head of Holofernes, Cranach the Elder, 1526-30

Many of the Cranach paintings picture allegories, religious, or mythical subjects, so a small heads up for the influence that might have had on the clothes. On the other hand, the princesses and noblewomen he painted wore the same kinds of outfits.

I ended up drawing this picture twice, as I wasn’t happy with the coloured background of the first one. Though it was very annoying at the time I’m pleased now, as it looks better this way, and Snow White’s clothes came out much nicer. All in all I’m pleased – more Disney Princesses will be drawn, when I have the time and inspiration.
Posted by Sarah W at 22:57:00 13 comments:

Today I finished my first medieval project (I think) in two years! Two summers ago I did a lot of sewing, as we intended to attend events with our group. Those plans fell through due to illness and other things, and in the wake of the disappointment I lost all taste for making medieval clothes. Last year I didn’t make anything, as we, due to little H being born at the beginning of the season, didn’t plan to attend any events. This summer though, we hope to attend at least one weekend event – fingers crossed! 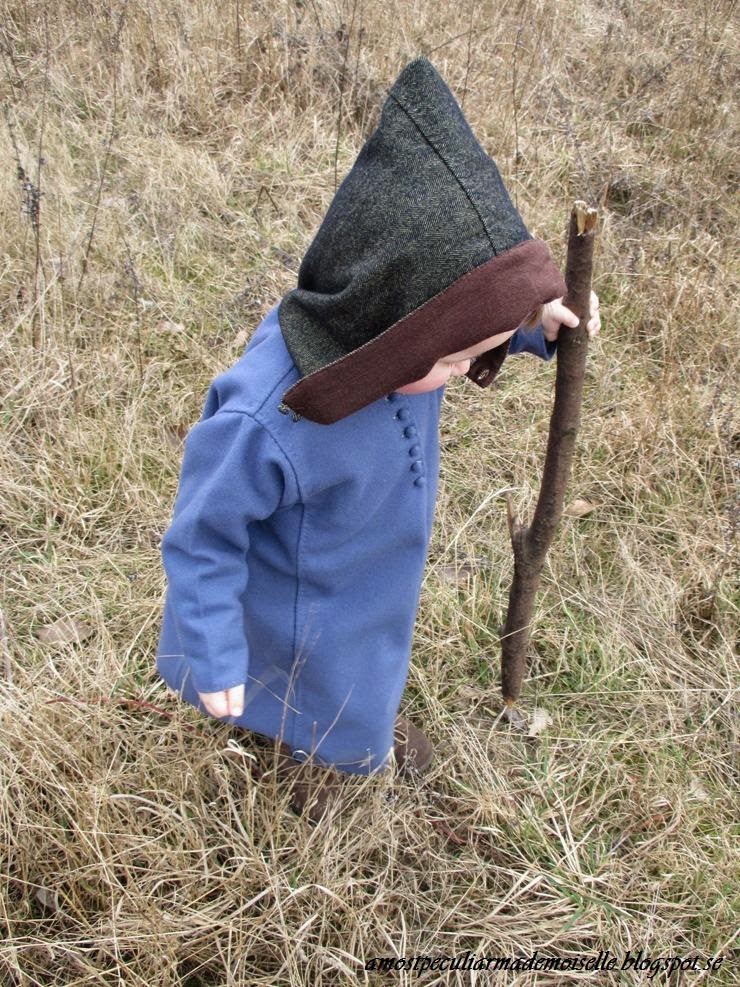 Two years ago I made a toddler’s cotte for B. As always with the children’s historical clothes I made it a bit too large, which I’m very happy about now as he never really got to use it then. Yesterday I took it out and found that, after letting down the wide double hem, it would still fit him, though now being a tad on the short side. The sleeves had only been folded back before, but now I hemmed them too.

The cotte is made from the left over fabric of Tobias’s cotehardie (from which I have also made myself a pair of hose – the whole family wears clothes from the same fabrics…), a nice, lightly fulled wool. It’s in a style called “Nockert type 5”. This style is slightly too early for us really, but as it’s used in a small child’s garment – that often looks very simple in this period – I think it’s acceptable. Besides, it was the only way I could use the fabric I had in an efficient way. 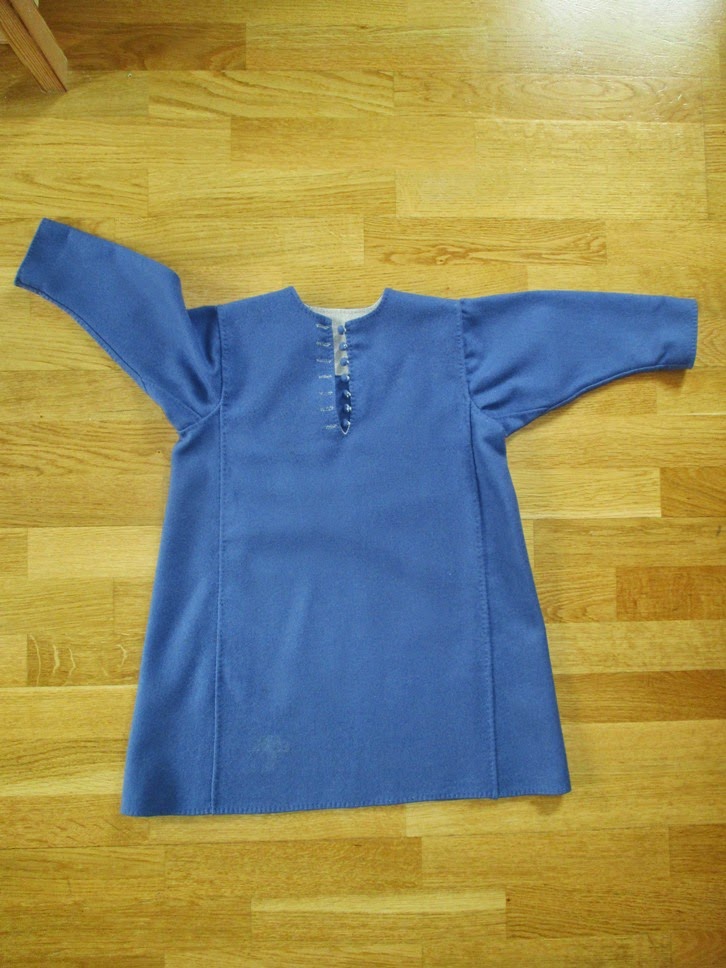 I’ve sewed it with waxed linen thread, mixing running stitches and back stitches. All seams are felled. The single folded hems are stitched with double rows of running stitches that show as small dots on the right side. 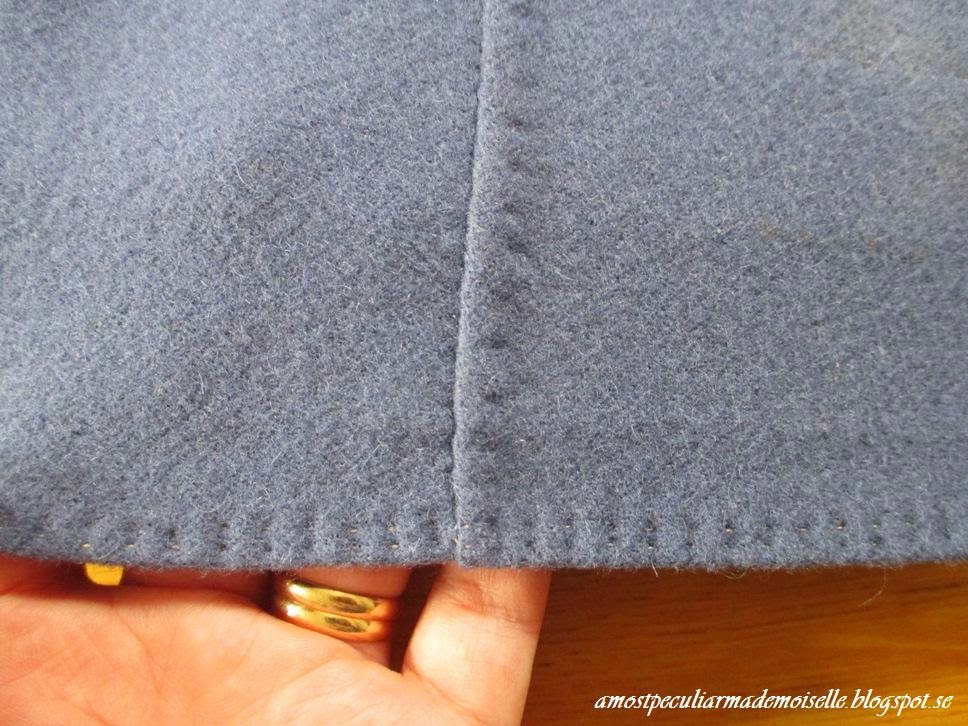 The neck and shoulders are lined with linen (pieced in a couple of places), to prevent itching – my boy has sensitive skin. 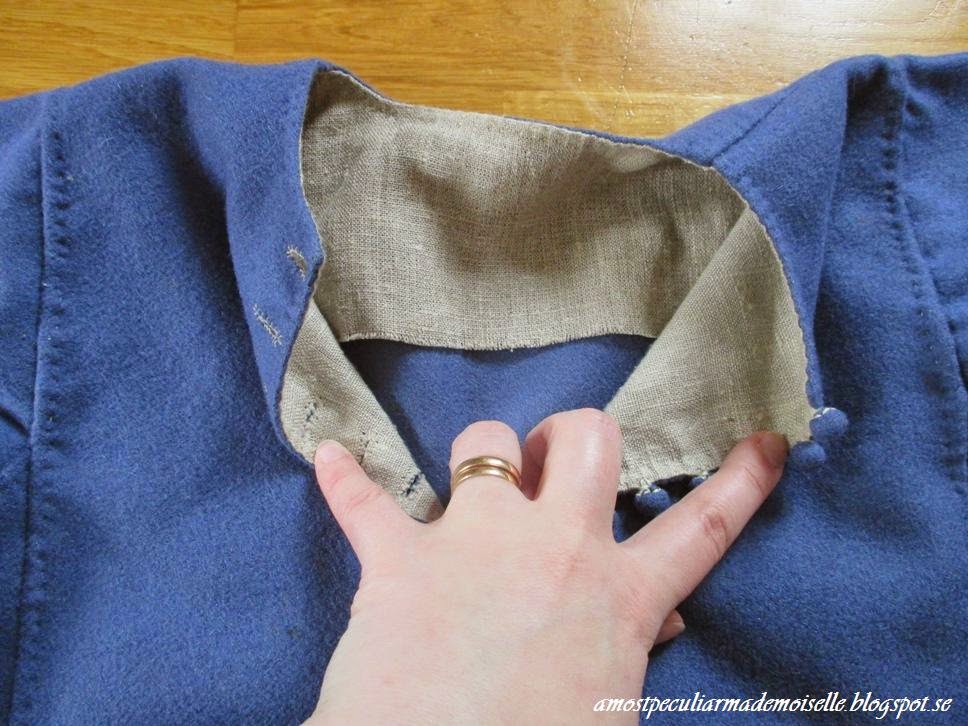 The cotte closes in front with self fabric buttons and buttonholes. 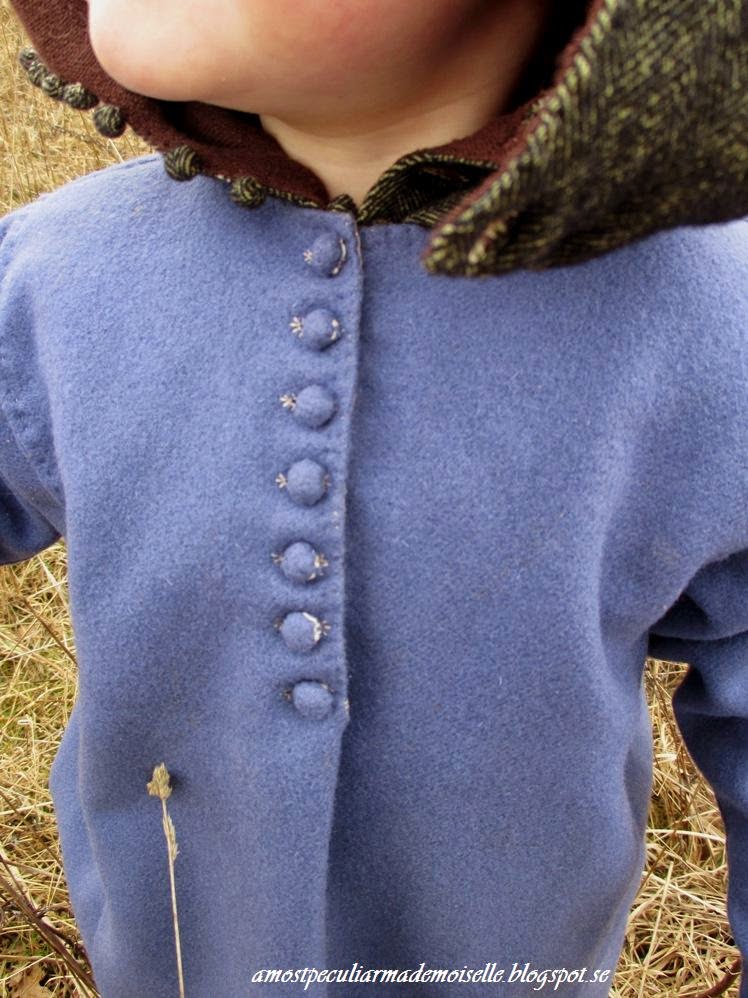 B likes it – when he tried it on yesterday he kept it on for more than an hour, and he was happy to have pictures taken of it today. He wore it over a linen shirt (that I also let down the hems on), modern clothes – it’s still winter after all, and I don’t have enough warm medieval children’s clothes to keep the chill out - and the hood I made him when he was a baby. 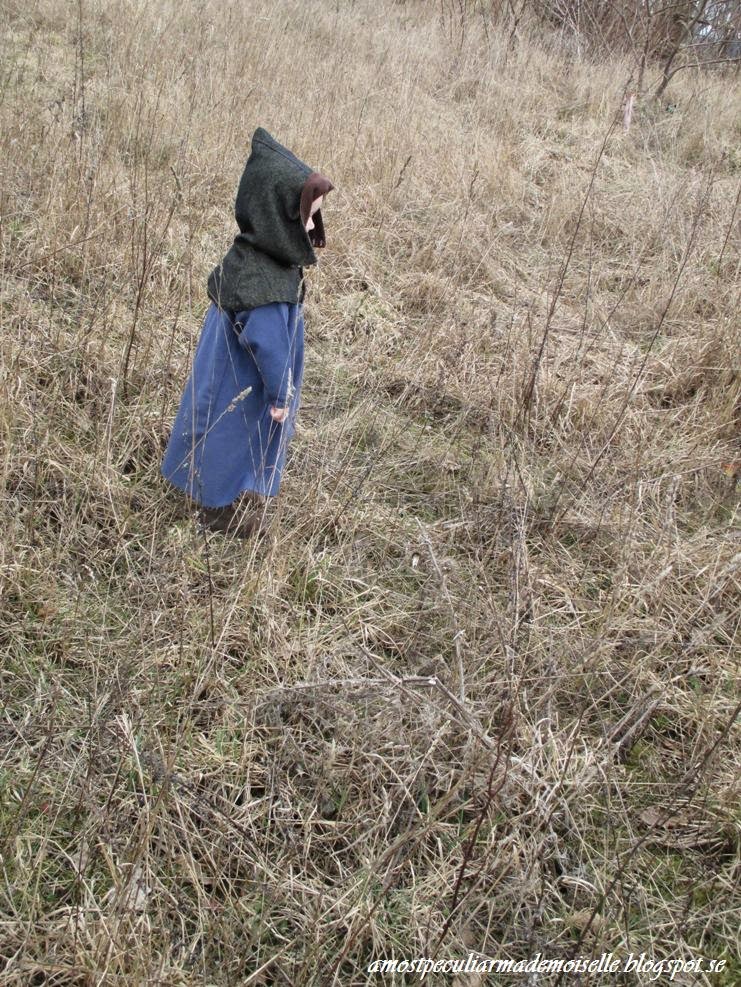 I’m so happy to have found my way back to sewing medieval things again. There will be more to come, I’m sure!