A while ago my cat broke of a rose from the plant in my living room window. I put it in a vase, and, as so often happens with me, I forgot to remove it when it had wilted. A few days ago I got tired of it, and picked it up to throw it away, when I noticed it had begun to sprout roots! I already knew that this plant is resilient; it’s almost died on several occasions, when I've been away for a while, but I have always been able to nurse it back to strength. So I’m making an experiment now; I've put the twig in a pot of soil, and then I’ll see what happens. If I’m lucky, I will have a baby rose as well as a big one. It still looks good after three days, so I think it might work. 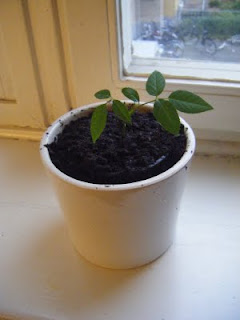 On Saturday I had planned to start a new project, and I had three options; a 14th century kirtle, an opplöt, (a sort of shirt) for my folk costume, or a dress for New Years Eve. I never got round to any of them. I didn't feel like making a pattern for either the kirtle or the dress, and the fabrics for the shirt was not pre-shrunk yet. Instead I found myself working on a Disney costume (Jane in Tarzan – there’ll be a post on that costume sometime) I made last year, but wasn't completely satisfied with. I will have to alter the sleeves a little, but I couldn't find the fabric, so the main thing I did was to remove the basted-on linen collar to starch it.

I thought I’d try the potato starch again, but instead of doing it like last time, I mixed it in cold water, which I then stirred into boiling water. That worked, it all became a sort of smooth, thick liquid. 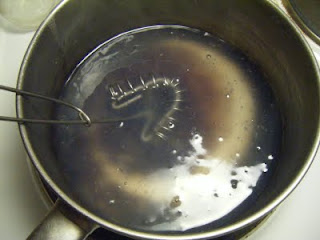 After starching the collar and hanging it up to dry, I still had starch left, so I starched a couple of other things as well, like this 1830's cap. 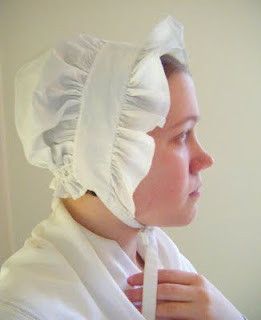 And, finally, I have taken down the veil I was trying to bleach in the sun. It’s not white white, but it’s much lighter than it was, so I’m well pleased. 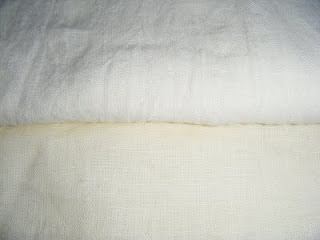 I tried to pin in to my coif, and it worked very well indeed. The veil is rather sheer, so you can just see the coif through it, but I think it looks nice. I love veils! I like having things on my head (veils, kerchiefs, coifs, caps – all depending on the period I’m dressed for), and a coif won’t be enough in summer. The sun gives me headaches, and a veil protects from the sun better than a coif or a kerchief tied round the head. 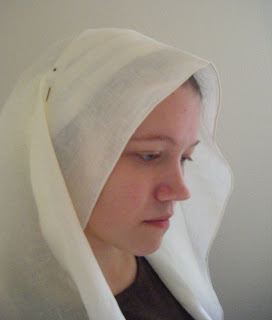 It frames the face in a nicer way as well, and since make up is a big no-no while re-enacting most eras, anything that can make you look prettier, in a period way, is a good thing.
Posted by Sarah W at 09:46:00