I decided to make a Regency shift for the third challenge of the Historical Sew Fortnightly – I have the stays, I really should have a shift. 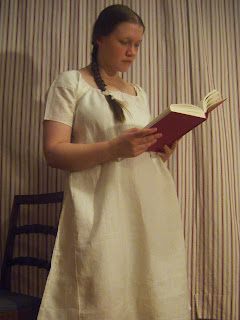 
I cut the fabric out on Monday evening last week, and by lunch today, it was finished. It doesn’t show in the picture, but the shift ends just below the knees; I’d like my next shift to be a bit longer, but I tried to save as much fabric as possible, as I have plans for what’s left of it. 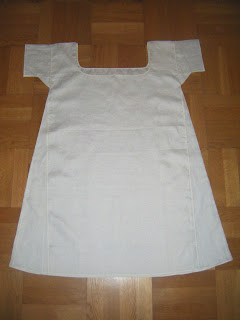 The shift is made from two squares, two gores (each made from two halves, to make the best use of the fabric), and three rectangles. They are sewn together using running stitches and a back stitch every few stitches. The seams are felled and stitched down to one side. 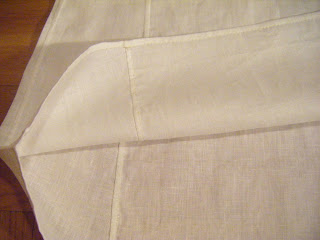 A drawstring made from thick, braided linen thread is encased in the hem of the neckline, tying on the inside front. 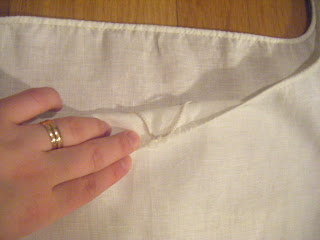 The Challenge: #3 Under it All
Fabric: Fine, crisp, bleached linen.

Pattern: None: I used square construction made to my measurements.
Year: Early 19th century.
Notions: Medium thick cotton thread for sewing, thick linen thread, braided to make the drawstring.
How historically accurate is it? Pretty much: the construction is period, as is the material. It’s all hand sewn, with felled seams. The braided drawstring is not ideal perhaps, but plausible.
Hours to complete: Not sure…. A couple of hours a night, so maybe 15-20 hours?
First worn: For the pictures.
Total cost: None at this time, as I had all materials in my stash. I don’t remember what I originally paid for them.

So far I’ve only made underwear for the Historical Sew Fortnightly, but that will change: the item I'll make for the next challenge will be seen when fully dressed.
Posted by Sarah W at 21:16:00