For the eighth challenge of the Historical Sew Fortnightly, “By the Sea”, I made a cap for my brother, who does Viking re-enactment. 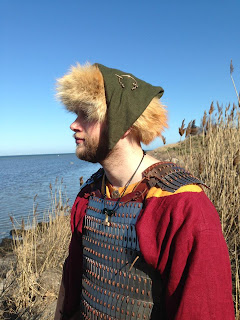 I had bought an old fur collar years ago, as I intended to make a fur trimmed cap for him, but never got round to making it. Now was the perfect time to finally do it. 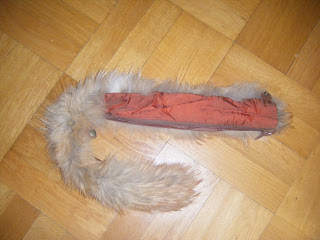 Before cutting away the lining and zipper.


I did not want to cut in any of my larger pieces of leftover wools for this, as I intend them for new 14th century clothes for little B, when he’s outgrown the ones he have now. I turned to my scrap bins. I had a fine, dark green wool left over from making my short hose, that just had to be pieced once, and for the lining (the wool was so thin it’d look ridiculously floppy if left unlined) I decided to use up small linen scraps. How many scraps I used in the end I don’t know, more than 15 anyway. 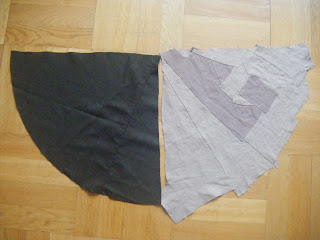 Most of the piecing done.

The cap is made in the shape of a cone, with a straight linen piece lining the fur sewn to the edge of it. 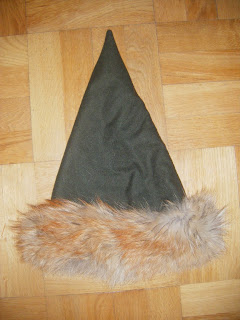 
It looks a bit like a Father Christmas cap, and when inside out, like a goblin’s cap. I think it has a certain charm that way… 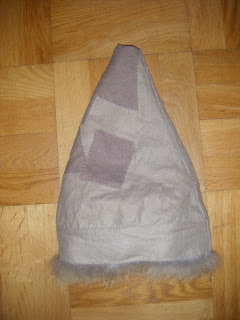 I made it way back in February, as I had to mail it to my brother, and wanted him to have time to take pictures when wearing it.

The Challenge: #8 By the Sea

Pattern: I googled this kind of cap, them measured and cut.

How historically accurate is it? It’s hand sewn with waxed linen thread, using historic stitches, but as for the pattern and linen lining – who knows? There are very few extant fabrics from this period, and most are really tiny. In “Viking Clothing”, by Thor Ewing, several types of pointed, conical caps are mentioned, from picture stones, written accounts by Muslim observers, and the Nordic sagas. Wool and silk, gold, silver and sable trim are found in graves, or mentioned. So I’d say it’s plausible. 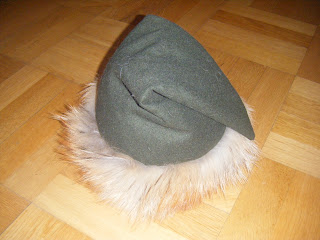 Hours to complete: 6-8, but most of that was spent piecing together the linen scraps for the lining.

First worn: For the pictures, but it is likely to see a lot of use during the summer.