My friend Maria has started a project called the Manuscript Challenge on Facebook. In short it’s about choosing a medieval picture, statue, effigy or similar in colour, and try to recreate an outfit as closely as possible.

As I don’t have too much of neither time nor money, I decided to do something simple, and something that needed doing. I chose this stained glass window of Adam and Eve working. It was made in the late 14th century, and was originally from Marienkirche, Frankfurt an der Oder, Germany, but after WWII it was taken by the Soviet Union and is now in the Hermitage Museum in St. Petersburg. 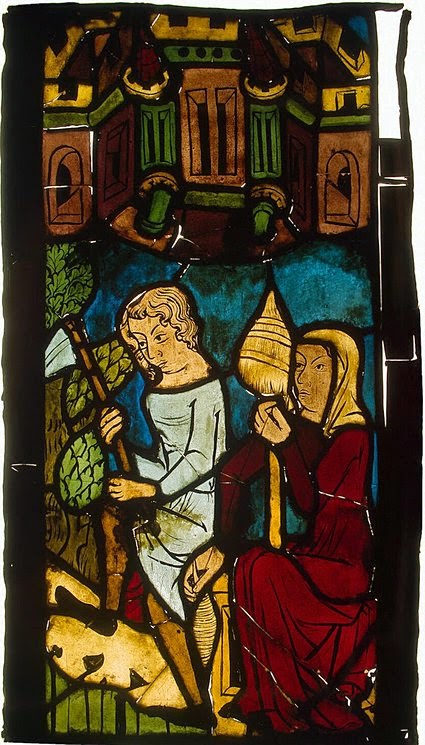 This picture is great (though not very pretty) for four reasons: 1) it is from my period and 2) also from my geographic area (Sweden had lots of influences from Germany through both trade and politics), 3) it portrays things I want to make for both myself and Tobias, and 4) I only have to do a little sewing to have all the clothes in the picture. I have planned to replace the short sleeves in my red dress with long ones for quite some time, and that wouldn’t be too much work. Of course I have veils already, and Tobias has green hose and shoes. The only thing I need to make from scratch is the greyish-blue tunic, and I have wanted to make him a longer, fuller, more old fashioned tunic for a while, so this is perfect.

Not that I have time to start sewing on it just yet; I have more pressing projects first.
Posted by Sarah W at 22:10:00