As one of the co-moderators of the Historical Sew (Monthly) Fortnightly Facebook group I feel it a duty to actually take part in a challenge now and then. The HS(M)F is very inspiring, and have for the past two years spurred me to sew historical things even when I didn’t really feel like it, or felt short on time – very rewarding when finished. Busy as I am though, the items I do for the challenges are more often than not quite simple. This is one of those things. But a simple thing can still be well made and well researched.

I am always on the lookout for fabrics and other things that will fit projects I’m working on or am planning. As I have had a very narrow income for most of my life, I’ve got in the habit of waiting for a thing to show up at a price I can justify, rather than getting what I want when I want it, or accepting poor alternatives. This is especially true of periods I don’t commit fully to at the moment. It’s not an ideal way to go about costuming, as it can take years - decades even - to stumble on the right things, but what can you do if you’re a poor perfectionist...

Fabrics for women’s clothing during the 19th century (lower to middle class) is one of those things I’m always looking for, and smallish checked tablecloths can be very good to pick up, as they are often of the right size (ca. 70-100 cm depending on the year) and often have woven in borders that were typical of  head- and neckerchiefs. 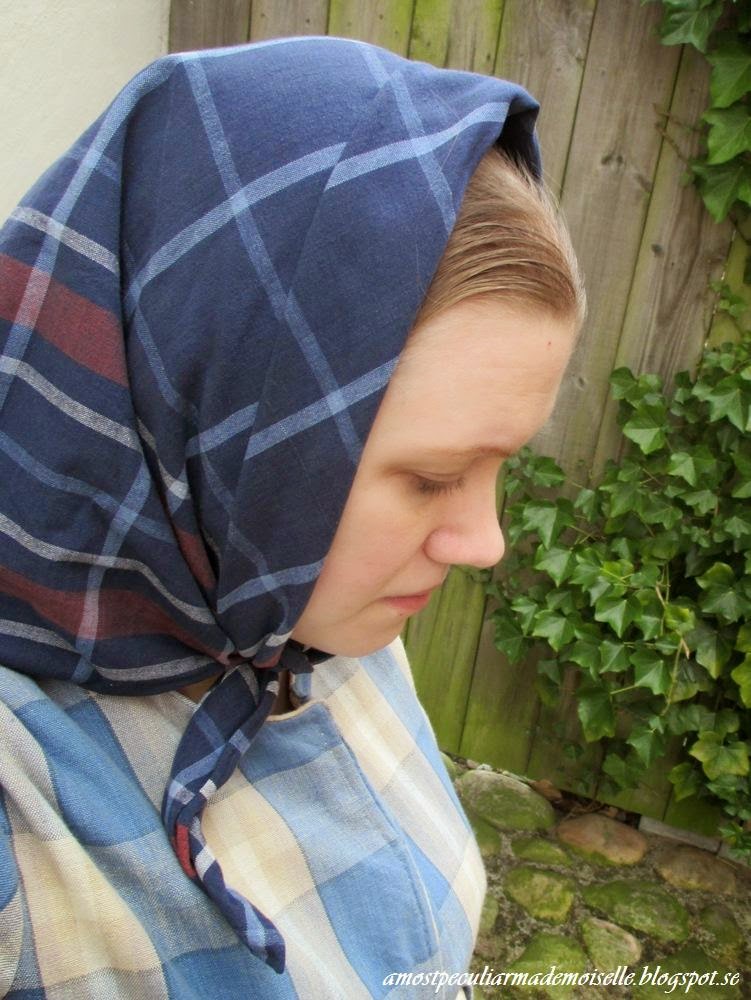 This is how you see them worn all over the country,
but there were also other, more regional styles.


Simple checked kerchiefs were worn by all ordinary women, as the wearing of hats and bonnets were often looked upon as dressing above one’s station. The group pressure in the countryside was severe enough in many places that this informal rule was usually adhered to right through the century and into the next. In towns and cities it was less rigid, but many couldn’t afford other headwear than kerchiefs anyway. There were other kinds of kerchiefs as well, but I won’t go into that in this post. 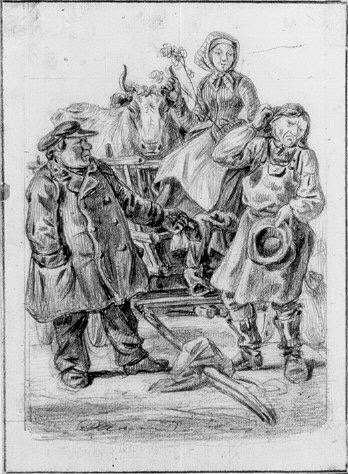 How these checked kerchiefs looked changed over the 19th century. In the early years they were made from linen, with blue, yellow and/or red checks on a white base. As the century wore on they were often made from linen/cotton and then cotton. Darker shades, often with red and light blue checks on a dark blue base, appeared. The season also affected the colours: lighter colours were worn in the summer and darker colours in the winter. Sometimes you see two kinds of borders on the same kerchief, so when folded into a triangle, depending on what half you showed off, it would be proper for different occasions, one often being simpler and the other brighter, or more elaborate. 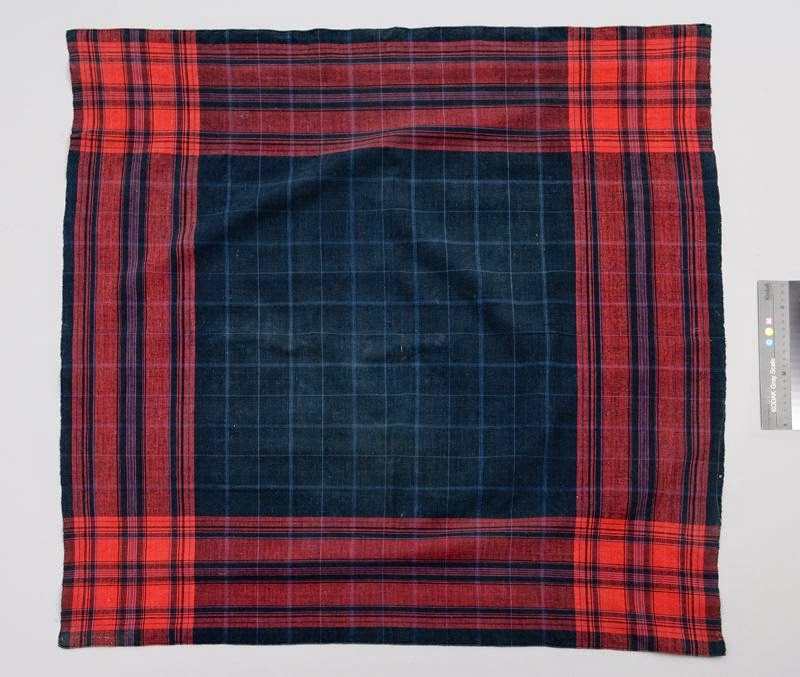 
These kerchiefs were often woven at home, sometimes in greater quantities, to be sold on by the weaver, or, more often, by peddlers. In some parts of the country it became tradition for brides-to-be to weave kerchiefs for their friends. 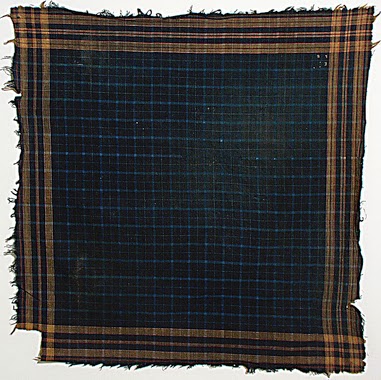 
This one I got for a small price at a charity shop a few years ago. The colours and border look enough like period kerchiefs to make me quite glad I found it. I cut of the tied fringes, and hemmed the square by hand with blue linen thread, just like in some originals. Tada! a finished challenge. In the pictures I’m wearing it with the Insanely Pieced Dress. 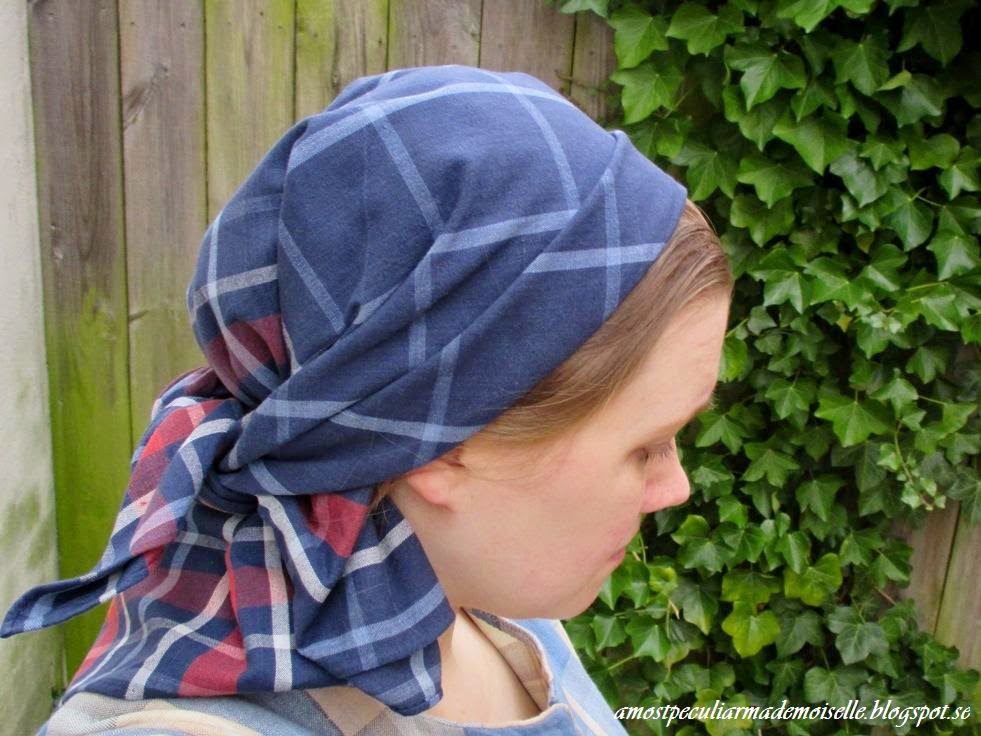 This style is seen in the county Skåne (Scania), alongside the other.