A Collection of Muggle Money

I was going through some boxes of stuff, putting some of the contents away, donating what could be liked by others, and tossing out the rubbish, when I came across some foreign coins that have been picked up when abroad. Not that my travels are extensive, but I’ve been to Scotland, and unsurprisingly all of the Nordic countries but Iceland. When looking over them I wondered what on Earth I should do with them – there was so little of every currency that exchanging them would cost more than the value of the money themselves, and we’re not likely to go abroad for a while. And then, while looking at the British coins and remembering how fascinated Ron Weasley was with the shape of the fifty pence, it hit me – why not make a small framed collection of Muggle money! 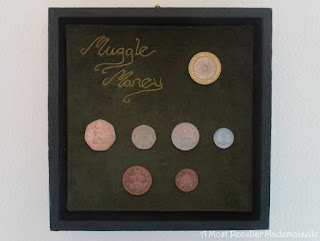 Said and done. I took out an open frame I’ve been meaning to give a makeover (it was a white shabby-chic thing), and painted it black. I covered a piece of thin cardboard taken from a corn flakes carton with a scrap of green velvet from my stash, and embroidered “Muggle Money” on it, through the cardboard and everything for stability. 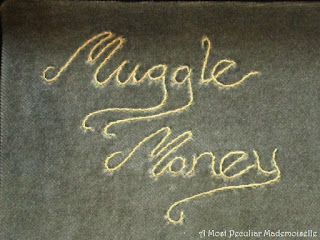 Then I played with the coins until they made a nice composition, and glued them into place. I finished with gluing the velvet covered cardboard to the back of the frame (not using too much glue, in case I want to give it another makeover in future), and that was that. 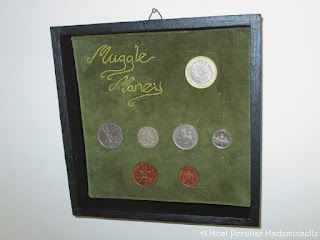 It will make a nice addition to the decorations of my now annual Harry Potter Halloween party. I'm sure Arthur Weasley would approve.
Posted by Sarah W at 13:11:00