I continue my present interest in my folk costume, so be patient. My interest will most certainly turn to something else in a little while. (That's my curse; I can never stick to one project for too long. My interest changes, but it always comes back again. So I finish most of my projects.... eventually.) Today I'll show you my shift, or särk in Swedish. This sleeveless kind is called, in the local dialect, hankasärk. I made it a while ago, and it's to be worn as the first layer of the folk costume. I will not post a picture of how it looks when I wear it, since it has a very low neckline. 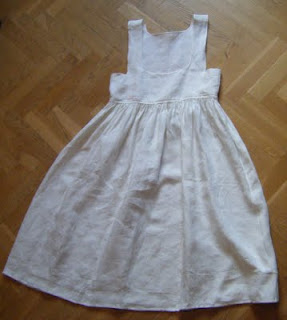 It's made of a bleached, rather coarse linen, and is based on an extant example in the museum Kulturen in Lund. I found a very good description and pattern in the book Skånska Särkar (Scanian shifts) by Margareta Bergstrand. All the pieces are the same shape as the original, but scaled to my size, and the stitches are the same as in the original, sewn with waxed linen thread. 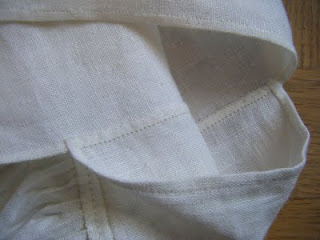 The shift comes down to about 8" from the floor. It is made out of three different kinds of rectangles: one for the "bodice" (with a hole cut out for the head), two small ones to form the sides, and three large ones that make up the skirt. 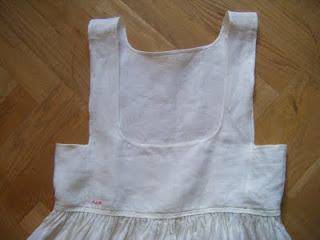 There's no shoulder seams, and the seams in the skirt are placed at the right side, off-center front and off-center back. Oh yeah, and there's the waistband. It's whip stitched to the pleated skirt, and the finished bodice is then whip stitched to it as well. The waistband has a line of back stitches sewn to it, for strength.
In the lower right hand corner of the bodice my initials are embroidered with red cotton yarn. The letters are based on ones from real shifts from my area. S is for Sarah (obviously), A is for my fathers first name, and D is for dotter, daughter. Sarah A.....s Dotter - Sarah A.....'s Daughter. That's how most people where called back then in Sweden, their own first name and then their fathers name, followed by Son or Dotter (yeah, son is the same in Swedish and English). They still have this practice in Iceland. So, that was today's history lesson. 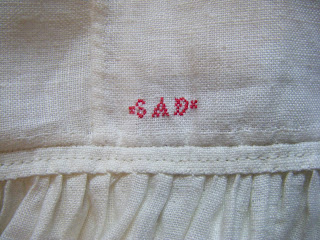 I like this shift very much, and put in a good deal of research and work into it. Some people think I'm wasting my time, since it won't show once I have the rest of the costume on, but every layer adds to the right look of an outfit. As all who wear period clothes will know.
Posted by Sarah W at 10:48:00