The Press is Building...

Lately I've had so much to do and think about that I've had no time to update my blog. The wedding dress is the thing that's taken most of my time of course. The wedding is a week from tomorrow, and the dress is to be finished a few days before that. Yesterday I lined the bodice, and today I've put in the buttons at the back. The dress will be closed by a zipper in the left side, so the buttons are purely ornamental, though I want them to look something like real buttoning. I don't just sew them on to the back of the dress, since that make them stand out in all possible angles, which don't look tidy at all. Instead I use the old method of carefully poking holes through the fabrics, pushing the shanks of the buttons through, then securing them with a ribbon running through all the buttons, and sewn to the inside of the dress. That makes them sit nice and tight, and very straight. 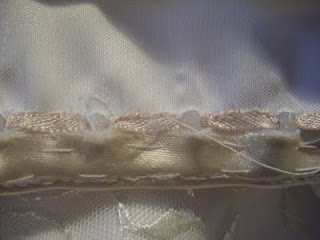 I am getting just a little stressed now... but so far I've never missed a deadline, and I really can't miss this one. My cat (named Lord Wellington by a friend) doesn't help, but he's much better at letting me be while sewing then he was.
On Saturday it's Halloween, but since my friends bridal shower is that night, we have a Halloween party on Friday instead, hosted by the brides soon to be cousins in law. It's a dress-up party (yeay!) and I've been preparing a costume for that. I had to make it very quickly, since I don't have much time. I will not tell what I'm going as though, I'll do that when I have pictures of it. Here's a teaser though. 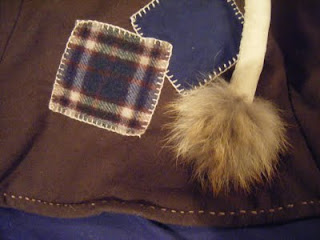 For the rest, all is well. I've visited my family a couple of days this week, and celebrated four birthdays at once; my Dad's, one of my sister's, one of my brother's and my eldest niece's. Tomorrow and on Sunday I'm working. I haven't worked day-shifts for almost two months, so that'll be interesting.
Posted by Sarah W at 13:55:00