This (or should I say yesterday now?) morning I finished my spedetröja – yay! For the ones of you who might not have read my previous posts on this, a brief history. This sweater is to be used with my folk costume, from the south-west corner of the county Skåne (Scania) in Sweden. The sweater is called spedetröja in the local accent, and was an important part of rural women’s wardrobe in that part of the country in the 18th and 19th centuries – even after the folk costume as such had gone out of use, the spedetröja was one of the articles of clothing that was still in some use at the very beginning of the 20th century. 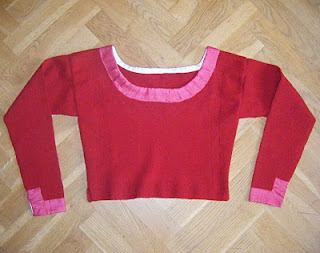 The county Skåne was divided in a lot of smaller areas, and they differed a little, or much, from each other costume wise. In my area, the spedetröja was black, sometimes green, and often red for more festive occasions - then as now, there were clothes for working as well as dressier clothes, and the same went for spedetröjor. The ones not to be used in the everyday work on the farms where frequently decorated with knitted patterns, all over the surface or just in a few borders. They where also decorated at the neck and sleeves with silk or velvet, sometimes several rows of different silk ribbons. From what I’ve been able to find from looking at online museum collections, most of the red ones had trimmings in pink and/or black silk. Since I had pink silk at home, I decided to use that. The way the trimmings looked differed from place to place, but in my area they where generally quite simple, compared to other places. 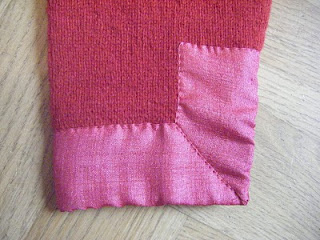 As I’ve said before, the spedetröja is knitted in thin wool yarn on needles 1,5 mm (US size 000, UK size 17). The bottom is knitted in double seed stitch, and up the sides at back and front, there are knitted borders. Another type of border is knitted at the shoulders. These borders are made by knit and purl stitches, in period and geographically correct patterns. The silk is pleated to fit the shape of the neckline and sleeves. It’s sewn on with tiny, spaced backstitches. The inside of the neckline, and the short slit at the bottom of the sleeves are lined with white linen. 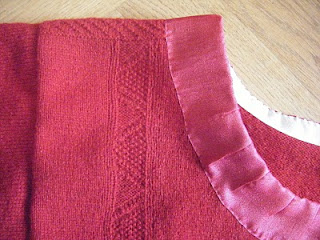 I will eventually invest in reproduction silver buttons to close the sleeves, but for now I’ll settle for brass hooks and sewn bars, which I still have to make.

It took me just a couple of days more than four months from the day I received the material to the last stitch on the silk trimming, much, much faster that I’d have thought. I did a mistake on it though; the increases should have been put on the other side of the vertical borders, but never mind – they will be mostly hidden by my bodice anyway. I just have to make it better next time, I plan to make a black spedetröja sometime in the future.
With some luck, there'll be a post about the completed folk costume soon, with all the layers, now the spedetröja is done.
Posted by Sarah W at 00:02:00