My family and other close friends know that it takes quite a bit of time for me to decide on things. This is not least true when it comes to sewing; more often than not I have changed my mind about the design somewhere between three and eleven times before starting on a dress, coat, skirt, etc. The bigger the occasion the more difficult it is to decide on what to make. Now, with the dress of my life to sew, I’m having some major indecision issues. Last Monday in school, I changed my mind three times in as many hours…. The only thing that is absolutely certain is that it’ll be in some shade of white. Sigh.

Right now, however, I’m leaning towards something like this (an old picture, and the dress is woefully wrinkled in it….): 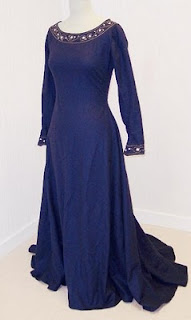 This hand sewn wool dress was made quite a few years ago, and worn on the premiere of The Return of the King, and at a New Years ball the same year. The style is inspired my medieval gowns, but is by no means period. It’s embroidered at neckline and wrists, and laces up in the back with hand sewn eyelets. The embroidery was inspired by medieval illuminations. I’m pretty clear on how I want my hair and veil. I’ll wear my hair up, hopefully with some volume, low in the back, with the veil simply dropped on my head, no gathers or anything. I also know that I want a myrtle wreath securing the veil. I’ve wanted that since I first saw this bride in high school: 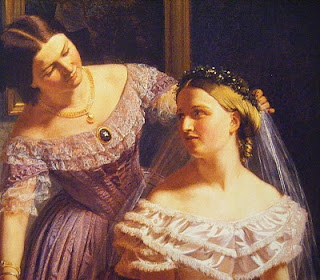 Detail of the painting “Bruden smykkes av sin veninde” (The bride is dressed by her friend),
by 19th century Danish painter Henrik Olrik.

Mine might be set more to the front than in the picture though. Think Marias wedding outfit in Sound of Music, and you come pretty close to the look, or air, I want, though I’ll change the details to fit my taste. 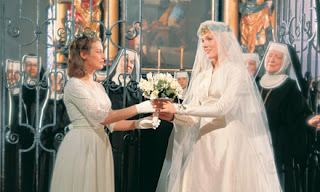 However, I have to manoeuvre in a much smaller space, so no cathedral length trains or veils for me :)

Now, I have concentrated much more on finding a place for us to live (though Tobias have spent more time on that than I), and a job for me, than I have on the wedding itself. There is also the whole bureaucracy involved, with booking a date in the temple, a location for the open house, contacts with the government concerning me changing my name, and there being no legal hindrance for us to marry. But since that is not very interesting to read about, I won’t say anything more about it until I actually have something to report.

And speaking of that – the date is set for the 18th of February. Just a little over two months away – yay!