Halloween is over and I can now start blogging about it properly.

Pumpkin juice is mentioned loads of times in the books, and I always wondered whether it would actually taste good – pumpkin and squash on their own doesn’t really taste all that nice, I think. As always internet is very helpful, and I found loads of recipes inspired by the pumpkin juice sold at The Wizarding World of Harry Potter in Orlando. I looked at a few of them, considered what we like (and don’t like) in our family, what we had in the cupboards, and tweaked the recipes accordingly. 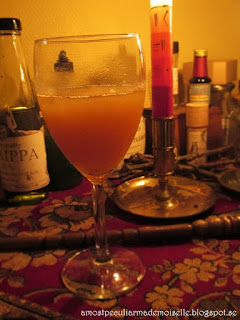 The pumpkin juice was by far the most popular refreshment I made for the party, and vanished quickly. I got requests for the recipe, so here it is.

Instructions:
- Split the squash in half, and let it roast in the oven at about 175C until soft - about 40-60 minutes.
- Remove the skin from the squash and pears, then put the fruits in a blender, together with the apple juice concentrate. A hand blender also works – if you use one, you can at this stage put everything in the pot you will later use for cooking it, saving on dishes. Mix to a purée.
- Stir in the spices and add the water.
- Bring to a boil, and then let simmer for a while – I let it simmer for 45 minutes, but I’ve seen them doing it for about half that time in other recipes.
- Strain the juice from the surplus pulp. The pulp can be used when baking bread, so no waste here.
- Serve hot or chilled – both are delicious. If too strong for your taste, dilute with a bit of water.

As it turned out, I liked this a lot better than I thought I would. It's slightly spicy, and neither the apple, pear or squash dominate too much. I'm sure to make it again!
Posted by Sarah W at 21:40:00