A few months ago I found a neat thing on Pinterest (link further down), and thought it might work well for biscuits. I then thought of another thing that would look nice, and so I made biscuits in two varieties for the party:

- owls, because they are very important in the wizarding world, not least so as messengers
- green-and-purple ones, as these colours are supposed to be symbolic of the two sides of magic, and is often combined in clothing to show who you are when out in the Muggle world. 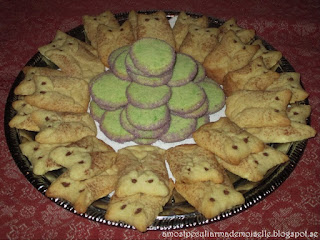 I used the same dough for both biscuits. It’s a common Swedish recipe, but I’m sure many other recipes would work just as well, or better, for this.

Instructions:
- Mix the flour and sugar – don’t put all the flour in at once, it’s tricky to know exactly how much you’ll actually need!
- Cut the butter into pieces, add to the flour mix.
- Add the egg and work into a dough.
- Chill in the fridge for a couple of hours.
- Make the biscuits.
- Bake in the middle of the oven at 175-200C for 8-10 minutes.

For the owls I took inspiration from this, but used something more food appropriate than a pen for the feathers on the tummy, used a pastry brush dipped in cinnamon to decorate the wings, and chocolate for the eyes. I chilled them well before putting them in the oven, to prevent them melting too much, but I still think I need to find a better dough for them in future, or put a bit more flour in them.

For the green-and-purple ones I just put a bit of green food colouring in the dough. When properly mixed, I rolled the dough into a log. I turned this in sugar I’d coloured purple the day before. I put the sugar coated log in the fridge to chill a bit, before cutting it into biscuits.

And that's it: yummy biscuits with a wizarding twist – they were very popular with the kids.
Posted by Sarah W at 18:00:00