A Forest in a Bell Jar

In my last post I showed some of the décor I’ve made for autumn, including a miniature scene of a forest in a bell jar. Here is how I made it. 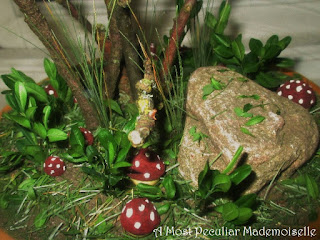 First I “shopped my house” for a suitable bowl. The one I decided on is a fairly shallow ceramic one. I had picked some pleasantly knotty and twisted twigs from a plum tree. This particular bowl was obviously too shallow for the twigs to stand up properly, even when stabilized with soil, so I wrapped aluminium foil round the bottom of the twigs, then flattened the foil to make a base. Of course I forgot to take a picture of this vital step – if I remember I’ll take one when I take the scene down.

When I was happy with where the trees stood in the bowl I filled it with dry soil from my flowerbeds. I wanted this to be a very low cost project, and using mostly materials I could just toss back out into nature afterwards. The aluminium foil is an exception; that will go to recycling. A nice looking rock that I had selected earlier was also positioned in the bowl. 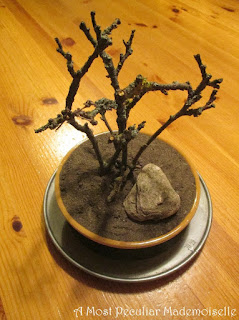 I picked a handful of grass from our slightly overgrown lawn. Some of it I cut into small pieces, the rest I let as was. I put it all on a baking tray and dried it in the oven on low heat. 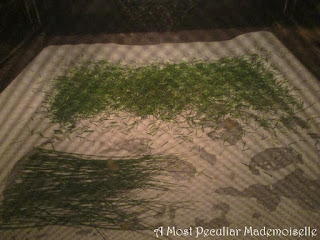 I took these strands of longer grass, divided it into five small bunches, that I “planted” here and there in the soil. 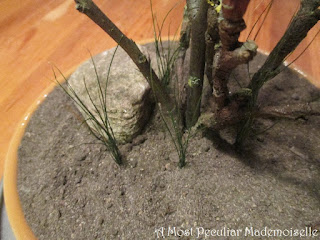 When I was happy with how the scene looked I took the finely cut grass and sprinkled this all over the scene, to cover the forest floor. 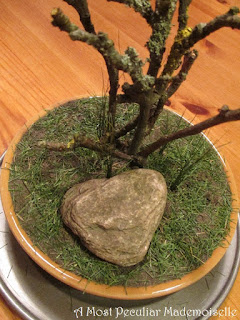 To give more texture and interest I then sprinkled tiny dried leaves that I had saved when trimming our boxwood, and the myrtle plants (daughter and grandchildren of the one I wore as a wreath at my wedding) I have all over the house. I let some leaves fall on the rock, to give an impression that they had fallen from the trees. 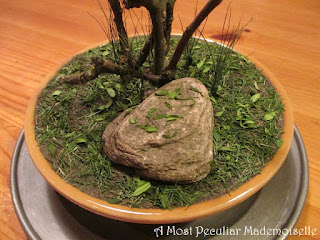 I then took small sprigs that I had saved and dried when I trimmed said boxwood. These were also planted. 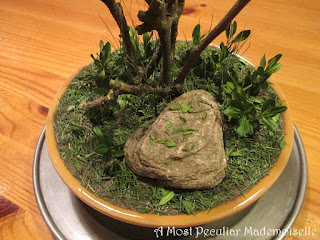 As a finishing touch I added small toadstools I made. I’ll make a separate tutorial for those. These will not be tossed out; I’ll keep them for future decorating purposes. 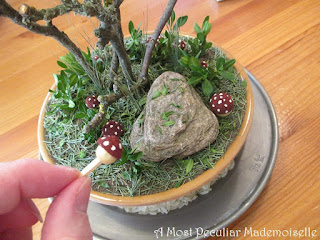 I am so happy with how this turned out – the pictures don’t do it justice. Everything looks nice when in a bell jar, but there is something special about miniatures. 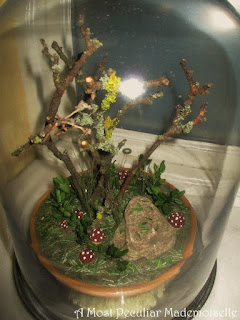 What do you think of it? Have you made something similar, or something different but also fun? Please share a link!
Posted by Sarah W at 20:36:00