I’m feeling a bit foolish, almost embarrassed. The reason is that I fell for the Pinterest pressure: I made a twig candle holder, something I have thought was quite silly. Sigh. I will totally blame this on being ill. 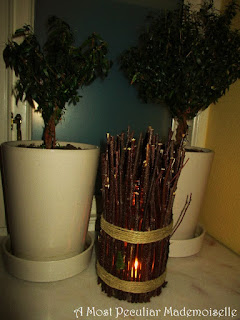 I made it from material sawed off from the bunch of birch twigs that is the business end of the broom I made last week (something I still have to take pictures of and blog about), which pleased me, as I love not to waste perfectly good materials.

For the jar I used an old mayonnaise jar, as I don’t have anything fancier I’d like to waste on this. As it happened, I didn’t want to eternally commit this jar either, so instead of gluing the twigs on, I taped them. It was a bit fiddlier this way, but if I want to use the jar for something else, I can just peel twigs and tape off. I couldn’t tape all the twigs on in one go; four were as many as I could conveniently control. The tape is attached to the jar after every four twigs, and is anchored to the previously taped part at the other end. It makes the twigs very secure. I left the leaf and tiny twig as I thought they added a bit quirkiness to it. 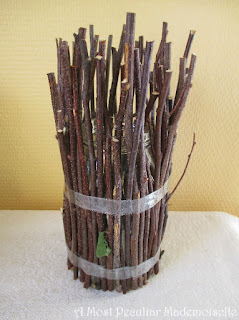 To cover the tape I tied twine around it, something I had planned to do in any case as I like that better than just the twigs. I was thinking about using ribbon, but I didn’t have any that felt worked, or that I was willing to sacrifice to this project. Depending on the season I can add other embellishments as well. 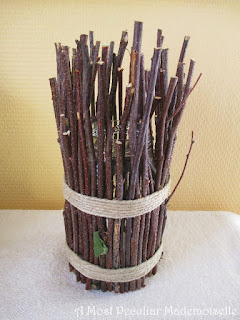 So that was that: a quick little project to entertain me when being ill and not quite in the mood for serious crafting or sewing. In the end, it did actually turn out rather nice, I think. Tobias liked it too, but remarked how in our culture we take good light so for granted, that we spend time covering it up to get "mood lighting". There is much truth in that.

Have you ever fallen for the pressure and made something you saw on Pinterest, even if it wasn't really something you were too excited about? Did it grow on you, or was it a total fail?
Posted by Sarah W at 22:58:00