The last couple of weeks I’ve got increasingly tired, going to bed at unnaturally early hours, and taking naps almost every day – so not like me. I wonder if it’s just the shortening days or something else. Either way it leaves me with a lot less energy and inspiration to work on school or any textile related thing than I’d wish. I can't help it, but I’m feeling a bit listless. 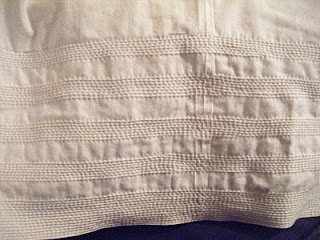 The Bayeux-inspired embroidery has all that was drawn on it sewn, so now I have to figure out what I want to do on it next. The borders need to be embroidered – the upper one should be simple enough, I’ll just take whatever figures captures my fancy from the original. The lower one is the problem – I could do something similar to the top, but I think I’d prefer to add the events that happened before the major scene. That way I’ll get the whole story, with less work. And then I’ll have to figure out what the text should be, and what language I want it in. I think I’ll stick to Latin as the original, it looks cool. And I think I’ve decided to do more scenes after this one – the question is which ones; the burning bush, perhaps, and then Moses and Aron before Pharao? Decisions, decisions… 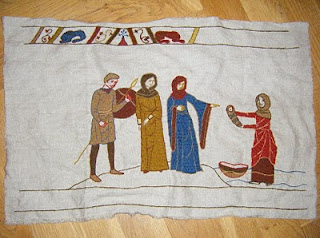 And lastly, lo and behold, I have started work on my winter coat again! I haven't done much (almost nothing to tell the truth), but I've got the ball rolling, so it should be easier to just continue. I will post about that separately. Right now there seems to be a good chance I will be very happy with it when finished.
Posted by Sarah W at 20:08:00