Last time I posted I said I was coming down with a cold, and that was some cold – I had a headache and fever for four days, which returned briefly over the weekend, and I’m still coughing. I missed the first three days of school, so a week into the term I’m already behind – smashing….

The good news is that I’ll be able to do most of my studying the coming two months from home – my own dear home! (Happy dance!) That gives me quite a bit of hope.

Since I’ve been feeling first so bad and then so tired the past ten days or so I haven’t really made any progress to boast about in any of my projects. I’ve done some sewing on the petticoat, and begun the 36th row of cording. 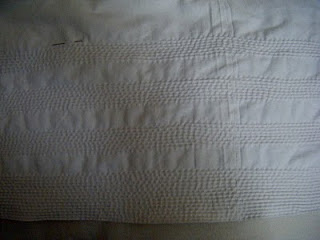 The other day I took out an old project that’s been hibernating for a few years – my English wool embroidery inspired by the Bayeux tapestry. It’s not intended to be a copy at all, but I’ve been heavily inspired by the look, colours and technique of it. I wanted a story that would have other people than soldiers in it, and one most people would be familiar with, and feel medieval enough, so I chose the Biblical story of Moses. The plan was, when I started it, that I’d embroider the whole story, but we’ll see how that works out. If I only ever finish this segment it’ll still look nice on my wall. Of course, it would be more of an impact to have several scenes from the story. 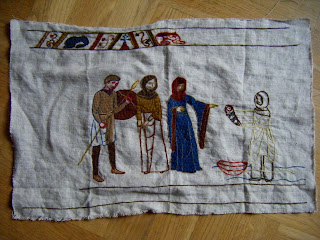 It’s embroidered with thin wool yarn on linen, and I drew the figures myself. I'm not completly satisfied with them - they don't look odd enough. Anyway, this was easy sewing during my illness – no need to think, just to fill in the areas with colour, and listening to the Old Testament online. 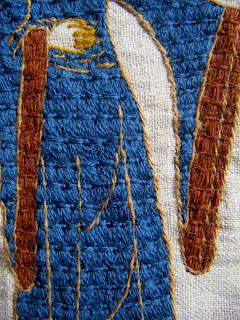 I like to listen to the scriptures, as a complement to my reading, and now it was time for the Old Testament. I never read it through (I’ve read most of it, but not everything), so I started listening to it while knitting or sewing a while back, and it’s very soothing. Interesting too, you get a new perspective on the history-part of it, when you go through it so quickly. When I read the Bible, I usually study some specific event or doctrine, not cover to cover.

I’m working up the inspiration to finish a winter coat that I begun a couple of years ago (is this the autumn of finishing old projects?), my old ones being threadbare. I’ve got it hanging on my wardrobe door, in the hope that inspiration will strike. It will be in wine red wool, but that’s pretty much all I know for sure so far – the sleeves and hood are not cut out yet. I’m running out of fabric, so it will take some figuring out how to make the most of what I have.
Posted by Sarah W at 09:33:00